Italian substitute Danilo Cataldi thought he had hit the equaliser as soon as the ball left his foot and zoomed towards the Hoops goal.

However, his hopes were dashed in a split-second as the towering keeper threw himself acrobatically to his right to beat the ball away.

That interruption from the Englishmen made certain three crucial points – following goals from Ryan Christie and Christopher Jullien – were remaining at the Hoops.

Forster also made another important block earlier in the second-half as the rolled back the years and had the fans reminiscing about a certain night when Barcelona – Messi et al – were beaten 2-1 under the lights in the east end of Glasgow.

Now the shotstopper, who signed a season-long loan deal from Southampton in the summer, hopes he “is not busy” when the Hoops take on the Italians in the Olympic Stadium on Thursday night. 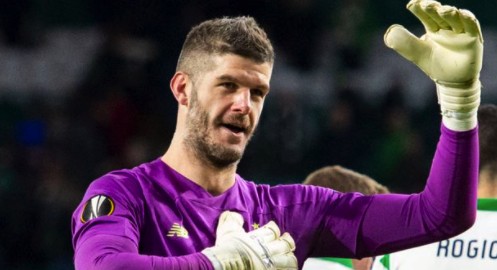 Forster, speaking to the Daily Record, said: “We’re under no illusions how tough it will be. They have some fantastic players, but there is nothing to be scared of.

“We just have to go and do our thing. We are in a good vein of form and have put in some fantastic performances. It is important we play at a level we know we can play at.

“If we do that there is no reason why we can’t get a positive result. We got a good point away from home in Rennes, but Lazio will be another very big test and they are maybe a step stronger than Rennes were.

“We’re expecting Lazio to have a lot of the ball. Hopefully, I’m not busy, but you never know.

“It will be a good test. We’ll see where we are at.

“All games in the group are tough for different reasons. You would probably say Lazio are going to be the best team. They have so much individual quality. It will be a tough game and one we are not taking lightly.”

Celtic go into the encounter on seven points and as group leaders. As well as beating the Serie A cracks in Glasgow, they also overcame Champions League conquerors Cluj 2-0 and picked up a point on their travels with a 1-1 draw with Rennes in France.