FORMER Celtic target Ivan Toney has been linked with a dramatic £50million move to Manchester United.

Former Hoops boss Neil Lennon wanted the striker during his summer 2020 rebuild as the Parkhead club prepared for their assault on a historic tenth successive title.

Toney had attracted attention of the club’s scouts with his goalscoring expolits at Peterborough after claiming 24 for the club.

Celtic offered £5million for the hitman which was immediately rejected by the third-tier outfit, as CQN reported TWO years ago.

The champions refused to budge on their valuation of the prolific attacker who had joined The Posh for a bargain £350,000 in August 2018. 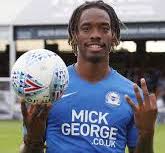 Instead, they paid £5million to West Ham for Swiss international Albian Ajeti who has flopped in Glasgow and has scored a mere nine goals in two years.

Toney, in the meantime, has gone from strength to strength after joining Brentford for an initial £6.5million rising to £10million with add-ons.

Following his move to the-then Championship side, Barry Fry, the Peterborough chairman, insisted: “Ivan would have WALKED to Celtic to get the deal finalised. They should have pulled their finger out.

“The boy’s done brilliant for Brentford – and that’s what I expected. Ivan’s different class.

“They might get £30million-50million for him if he carries on the way he is.

“Ivan wanted to go to Celtic because of the relationship he had with Gavin Strachan through working with him at Peterborough last season.

“And let’s be fair, Celtic are also one of the biggest clubs in the world with their support. 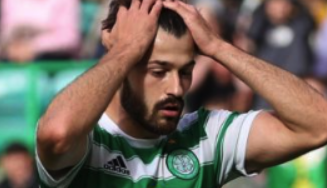 OOPS…Albian Ajeti holds his head in despair as he fails to fire at Celtic.

“That said, he’s got a better deal at Brentford. They really wanted him and did their homework. Nicky Hammond (former Celtic chief scout) flew down to see me, but Celtic’s bid was insulting. I told Nicky he’d wasted a flight.

“I’d spoken to him on the phone and told him what we wanted.

“I’d have waited. I told Gavin and Nick I was happy to do that – provided they came up with the right money.”

While Toney thumped in 31 goals to push the London club to the English top flight, Ajeti struggled in Scotland and could only manage six strikes in his debut campaign.

He could be moved out before the transfer deadline on August 31 to follow Greek keeper Vasilis Barkas, who joined around the same time at £4.5million from AEK Athens, who has agreed a season-long switch at Dutch outfit FC Utrecht.

Toney proved he could score goals in the Premier League and saw his value soar as he collected 14 goals, 12 in the league.

New Old Trafford chief Erik ten Hag could be ready to pounce and there has been initial interest, but a lot will depend on what happens with Cristiano Ronaldo and Anthony Martial at the club while the Dutchman continues his squad revamp, as reported in the Sunday Mirror.

Davie Moyes’ West Ham and Leeds United are also keen on a player who is under contract at Brentford until June 30 2025.

Ironically, former club Newcastle, now bossed by one-time Celtic aim Eddie Howe, are also reported to be in the hunt.