JONNY HAYES sealed the deal when he rammed home the stoppage-time second goal in the 2-0 win over Steven Gerrard’s side at Ibrox on September 1 last year.

And that strike from the Republic of Ireland international, who had replaced Mikey Johnston in the 85th minute, made certain Celtic did not endure a horror hat-trick in Govan.

Neil Lennon’s men went into the first Premiership encounter on the back of successive losses on the ground of their Glasgow neighbours and a third consecutive league defeat would have been the first time they had been on the receiving end of an x-certificate trio since February 2010.

The rot had started the previous December when a deflected shot from Ryan Jack wrong-footed Craig Gordon to give Steven Gerrard’s side a 1-0 triumph. 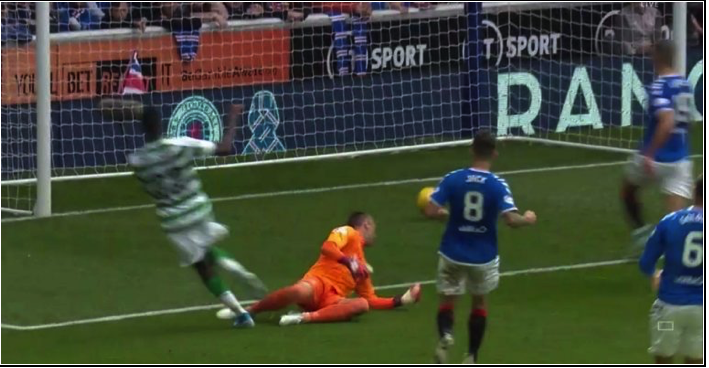 START OF SOMETHING GOOD…Odsonne Edouard rolls in the opener in September.

Neil Lennon was on the receiving end of a 2-0 scoreline in May 2019 when it didn’t really matter with the eighth successive title being wrapped up with a 3-0 victory over Aberdeen at Pittodrie where Mikael Lustig, Jozo Simunovic and Odsonne Eduard claimed the goals.

At the start of September, Gerrard’s side were tipped by many critics to continue the sequence, but, thankfully, it didn’t quite turn out that way after a masterclass from the Hoops.

French talisman Edouard got the ball rolling on the revival when he conjured up the opening goal as he raced through the home rearguard before nonchalantly slotting the ball behind the advancing Allan McGregor just after the half-hour mark.

In the fading moments, Hayes, bursting forward onto a measured pass from Olivier Ntcham, sprinted in on the keeper who managed to block his first effort, but the versatile star followed up to ram in the rebound.

And disaster had been averted at the venue where it will be Lennon’s side’s opportunity to pile on the misery at the weekend.