Celtic Quick News on News Now
You are at:Home»Latest News»HOW THE LEAGUES WERE WON: Part 1
By CQN Magazine on 18th May 2020 Latest News

CELTIC kicked off the surge to nine successive titles with Neil Lennon in charge as they ran amok at Rugby Park.

Nine-man Hoops, who had Cha Du-Ri and Victor Wanyama red-carded, had been denied a title party at Ibrox a fortnight earlier when they suffered a 3-2 defeat against Ally McCoist’s side.

But there was not even the hint of a mistake in the confrontation at Rugby Park as the versatile Charlie Mulgrew scored twice and set up goals for central defender Glenn Loovens and striker Gary Hooper before half-time. The game as a contest was effectively over even before the restart.

Late strikes from Joe Ledley and Hooper again rounded off a day of celebration as the rampant, free-flowing Parkhead outfit lifted the title for the first time since 2008. 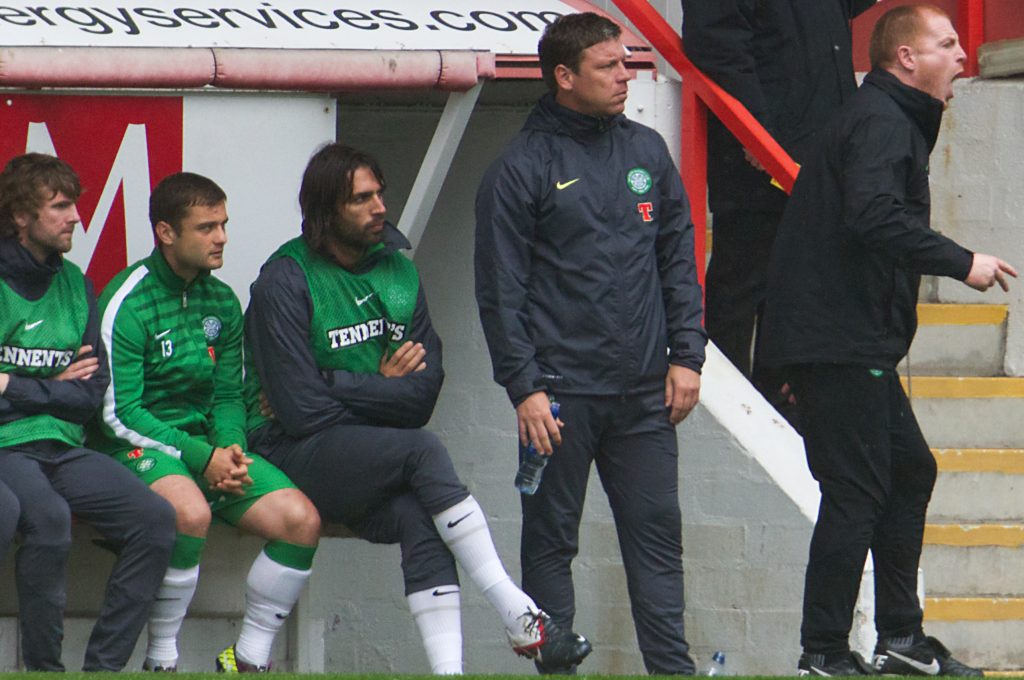 I’M IN CHARGE…Neil Lennon, with his assistant Alan Thompson, barks out some orders at Pittodrie. Paddy McCourt, Shaun Maloney and Georgios Samaras sit this out. 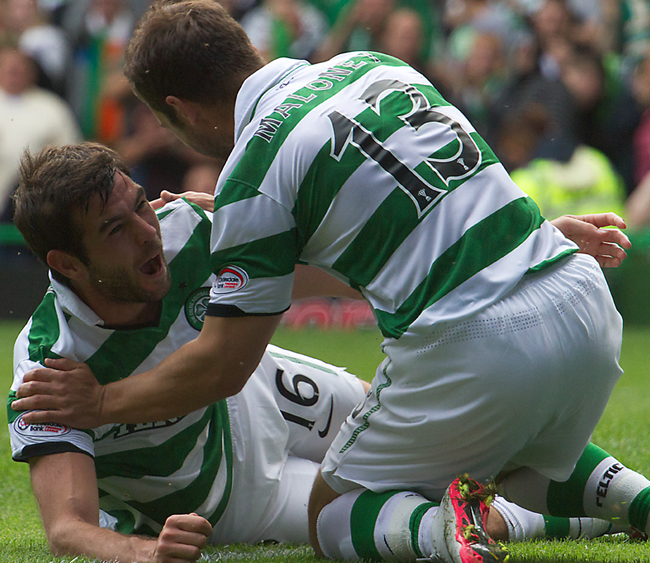 CELEBRATIONS…Joe Ledley is congratulated by Shaun Maloney after claiming a goal.

HEADS I WIN…Joe Ledley drifts in behind Victor Wanyama to score against the Ibrox side in a packed penalty area. 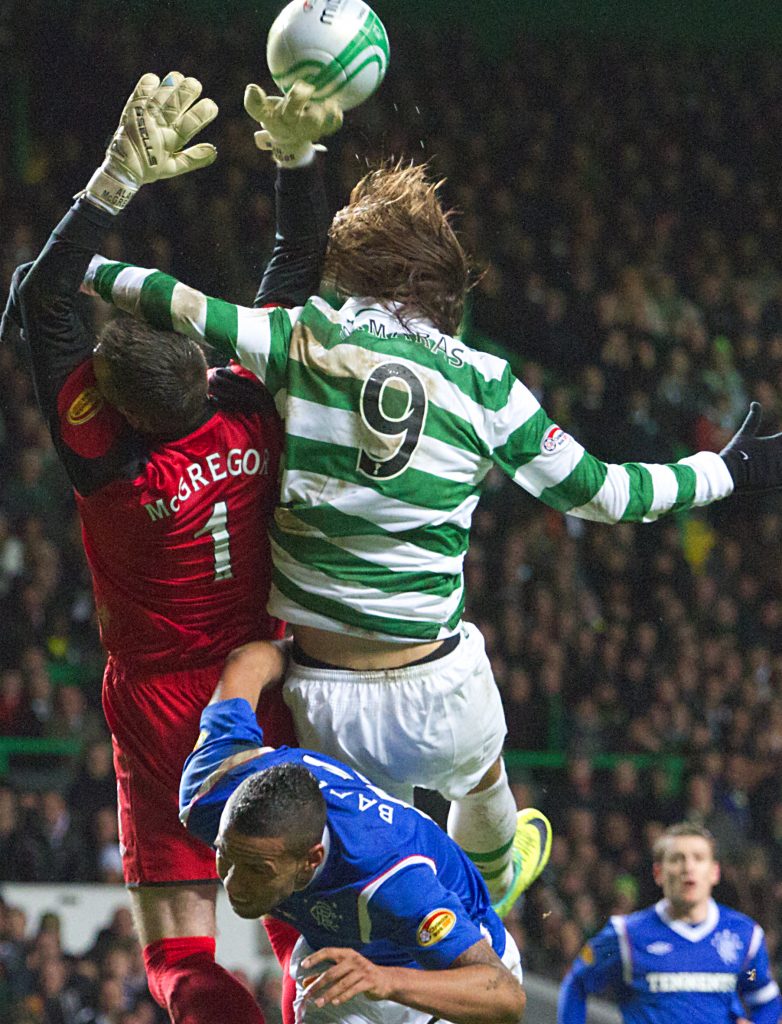 AIR RAID…Allan McGregor takes the ball off the head of Georgios Samaras. 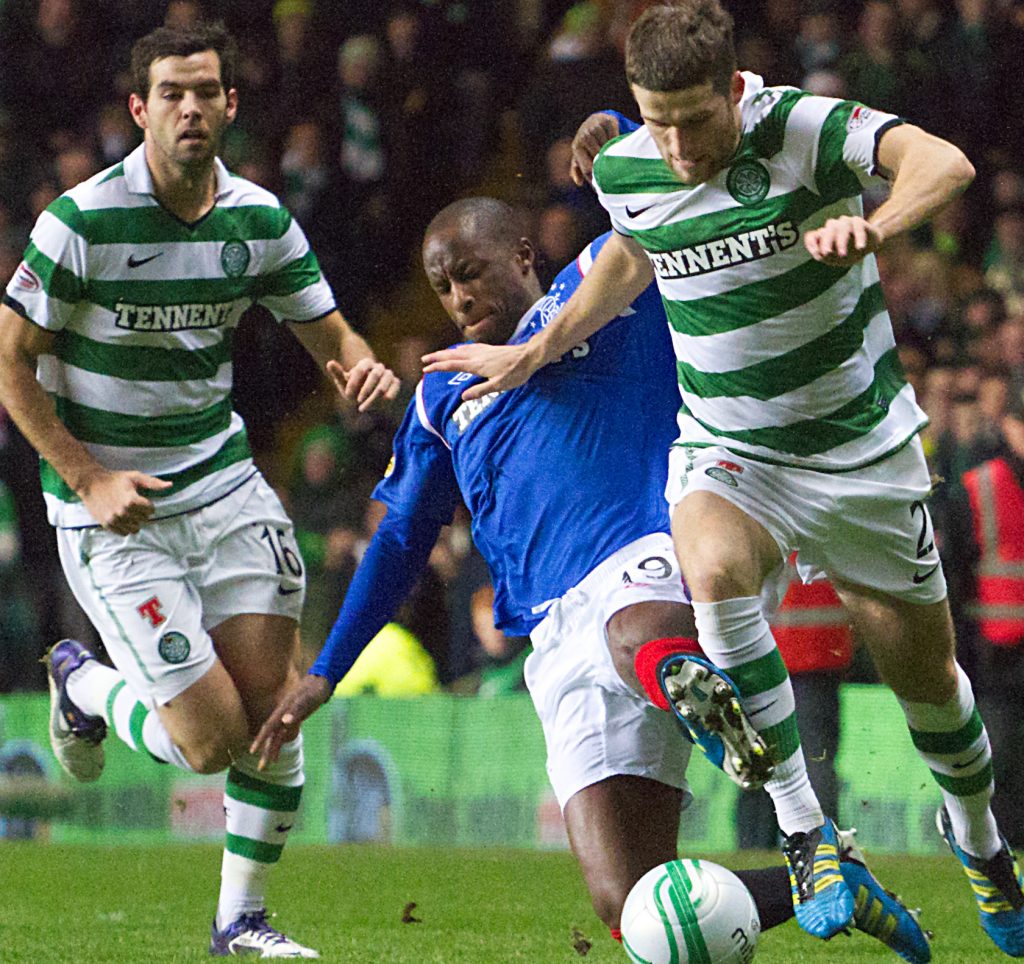 ON THE RUN…Adam Matthews storms past Sone Alike as Joe Ledley backs up his fellow-Welshman. 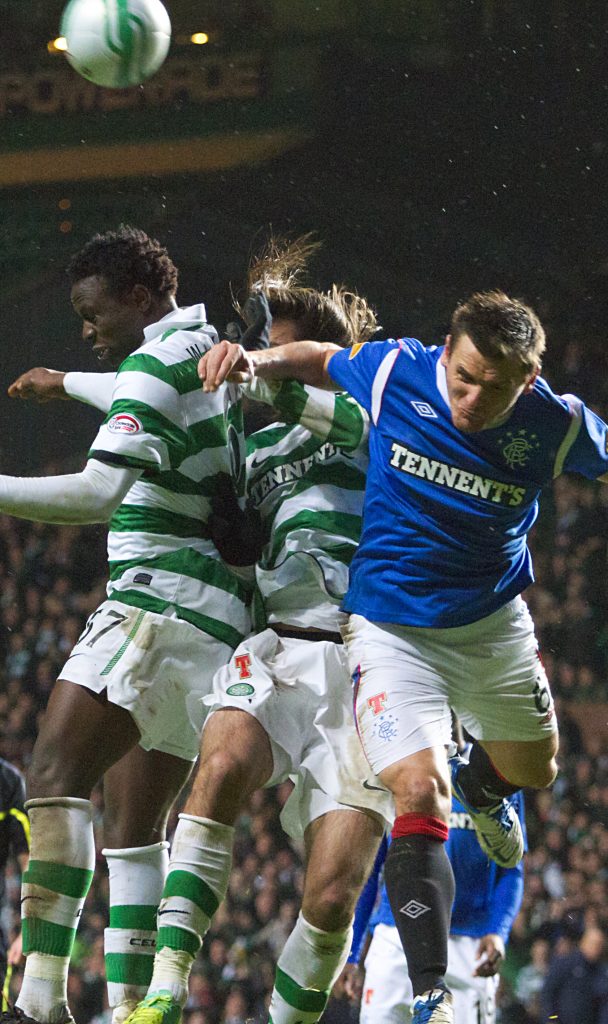 AIR WE GO…Victor Wanyama and Georgios Samaras put the pressure on Lee McCulloch. 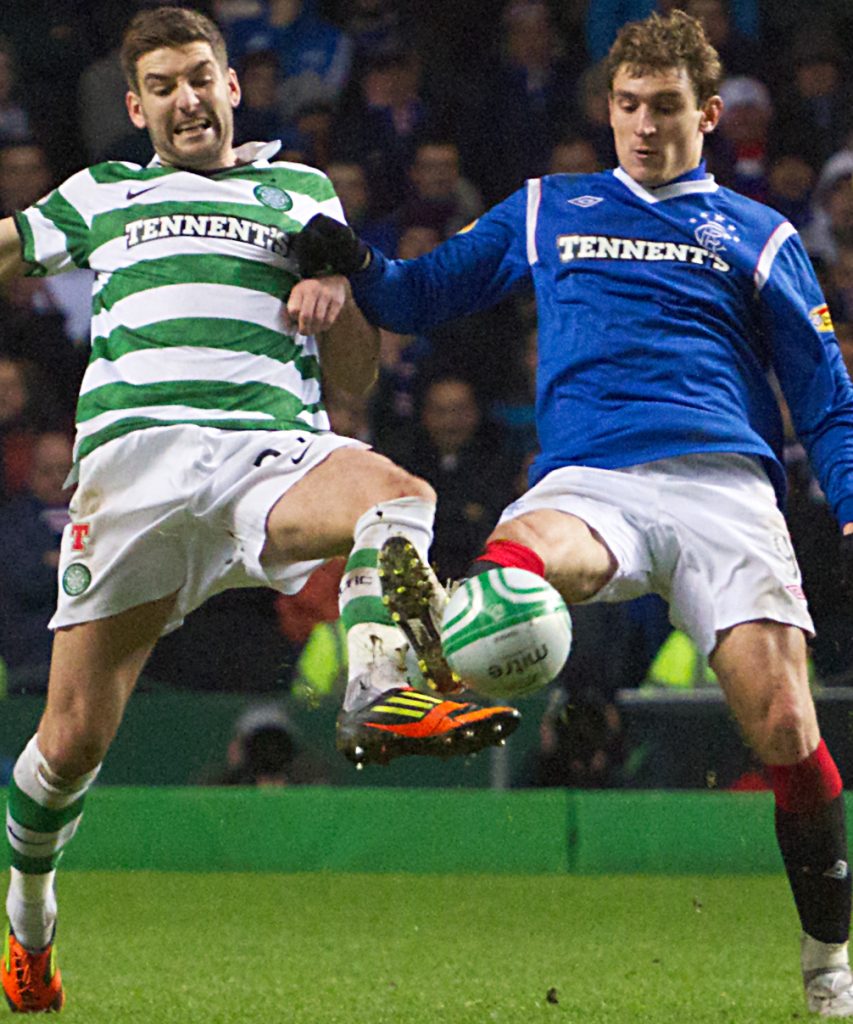 BEST FOOT FORWARD…Charlie Mulgrew wins the duel for the ball. 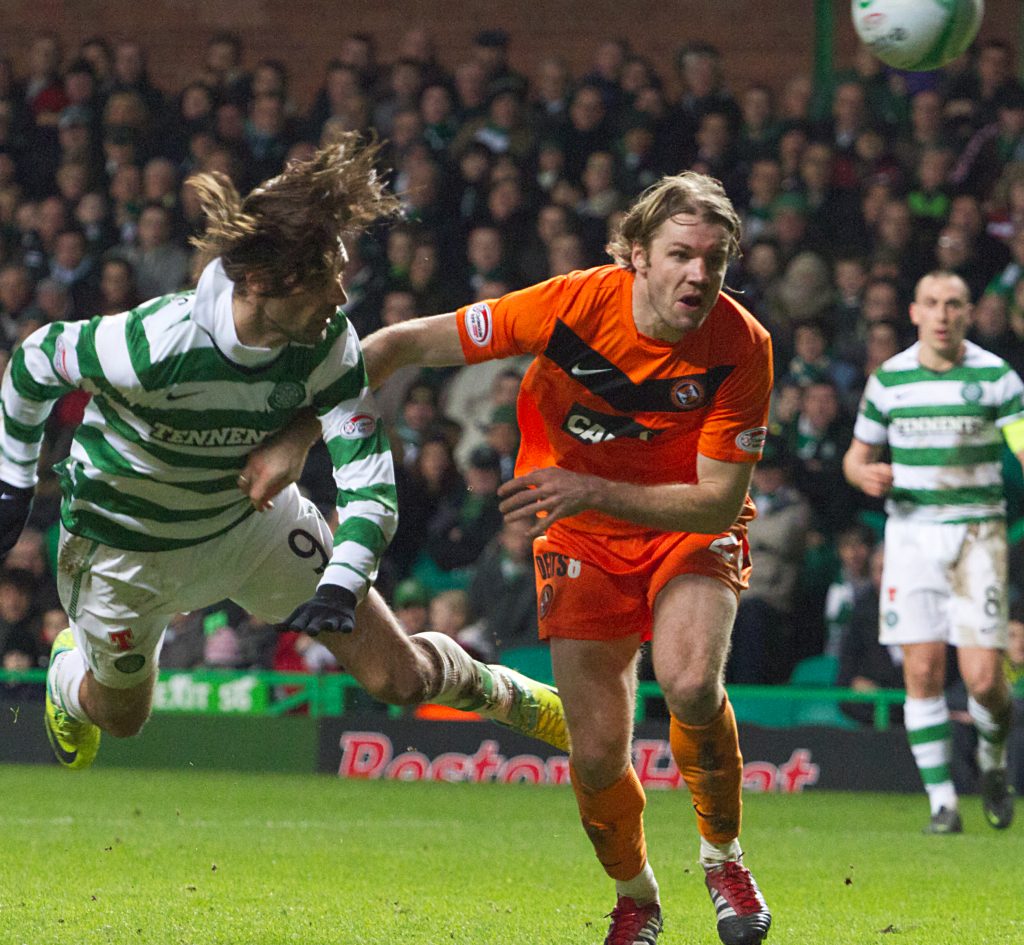 HEAD MASTER…Georgios Samaras dives in before Dundee United’s Robbie Neilson to flash in an effort. 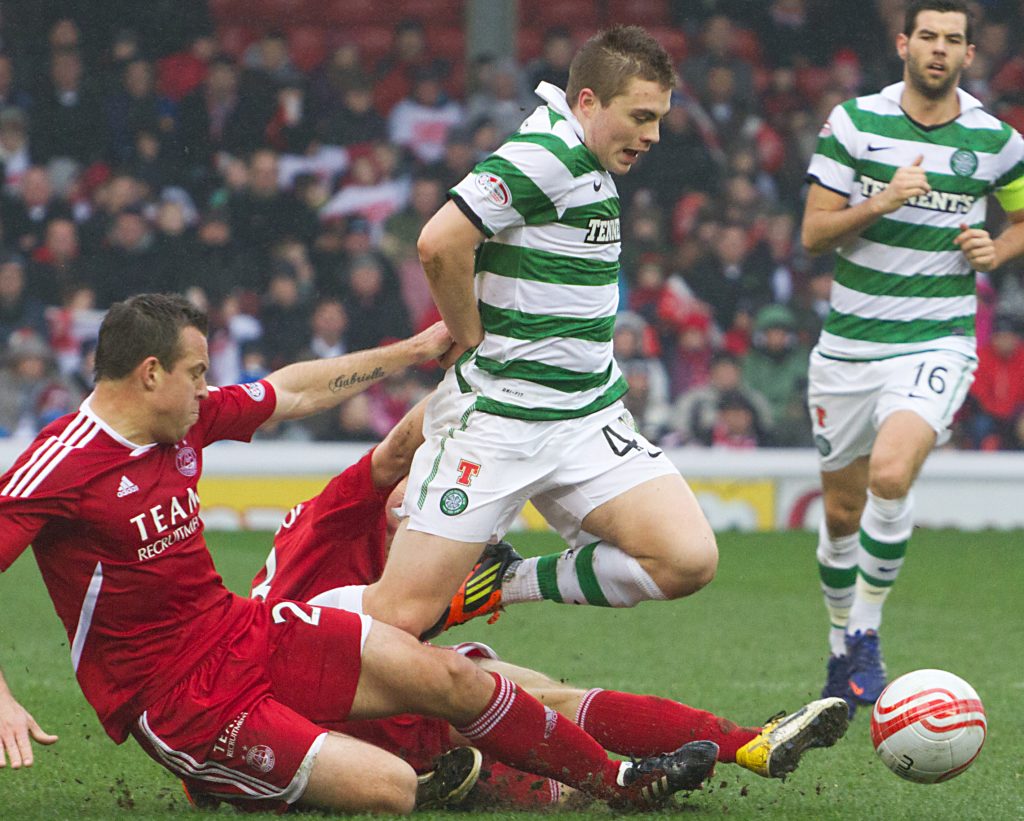 GOING DOWN…James Forrest prepares to hit the deck under a double challenge from Dons defenders. 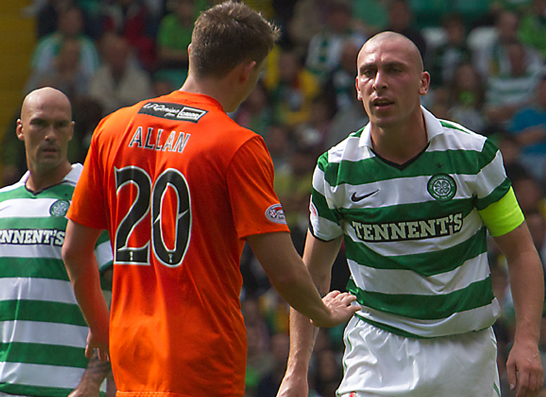 NOT HAPPY…Scott Brown prepares to have words with Dundee United’s Scott Allan, who later became a Hoops team-mate. 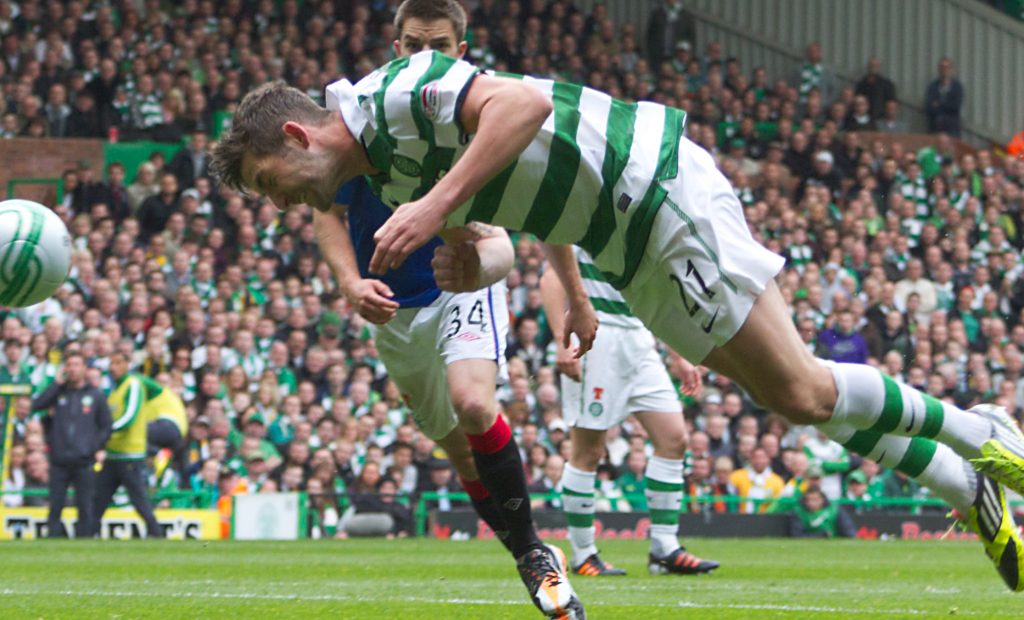 HEADING FOR SUCCESS…Charlie Mulgrew dives full-length to score against the Ibrox side. 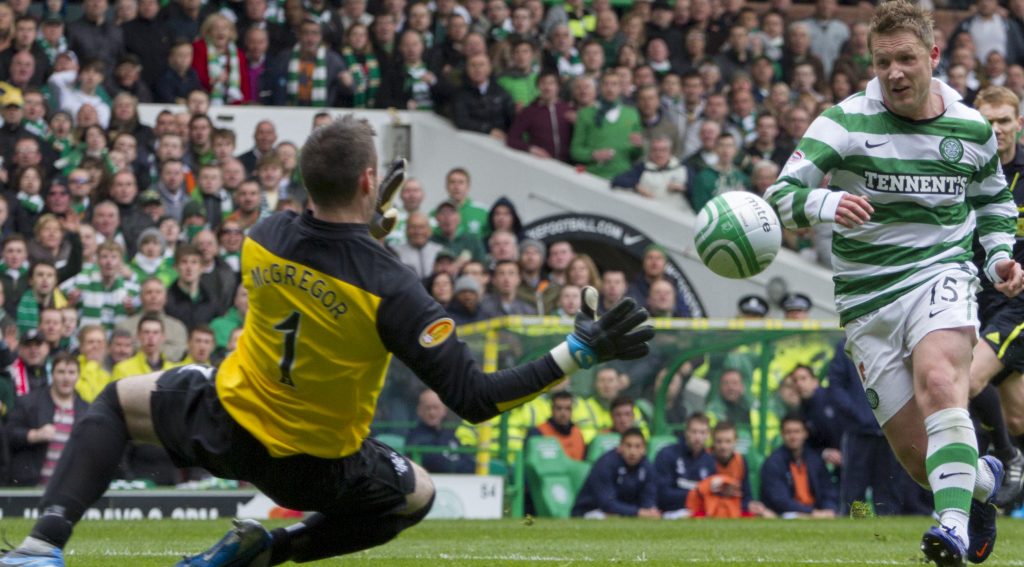 BY THE LEFT…Kris Commons clips the ball beyond Allan McGregor in Celtic’s runaway 3-0 win. 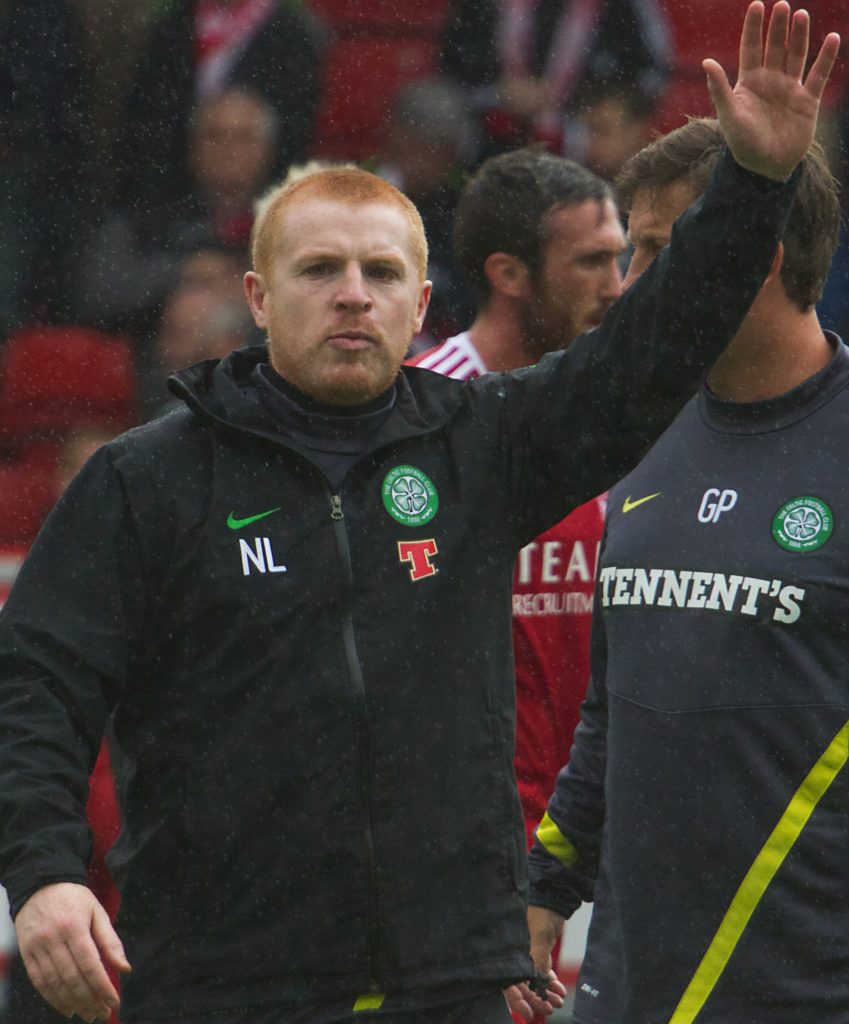 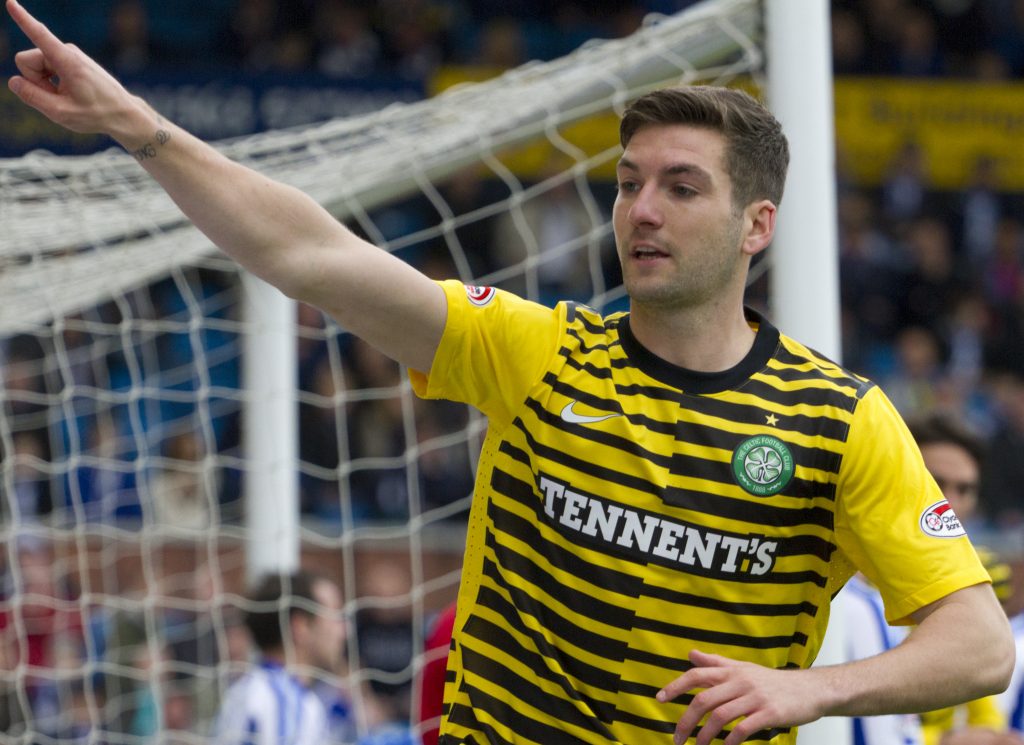 CHAMPION TOUCH…Charlie Mulgrew after scoring against Kilmarnock at Rugby Park. 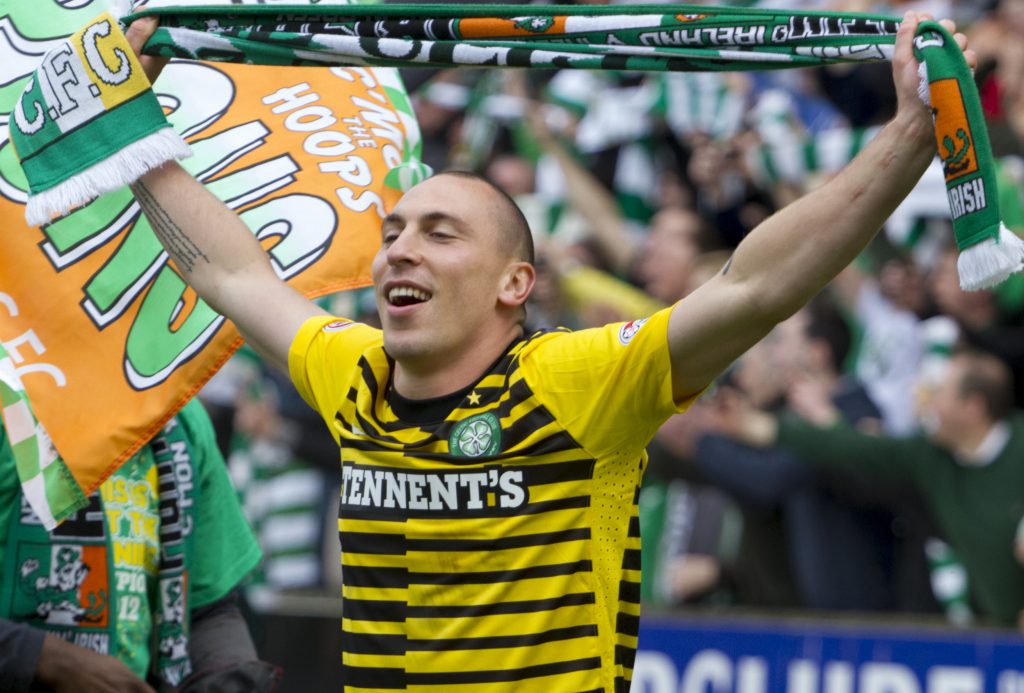 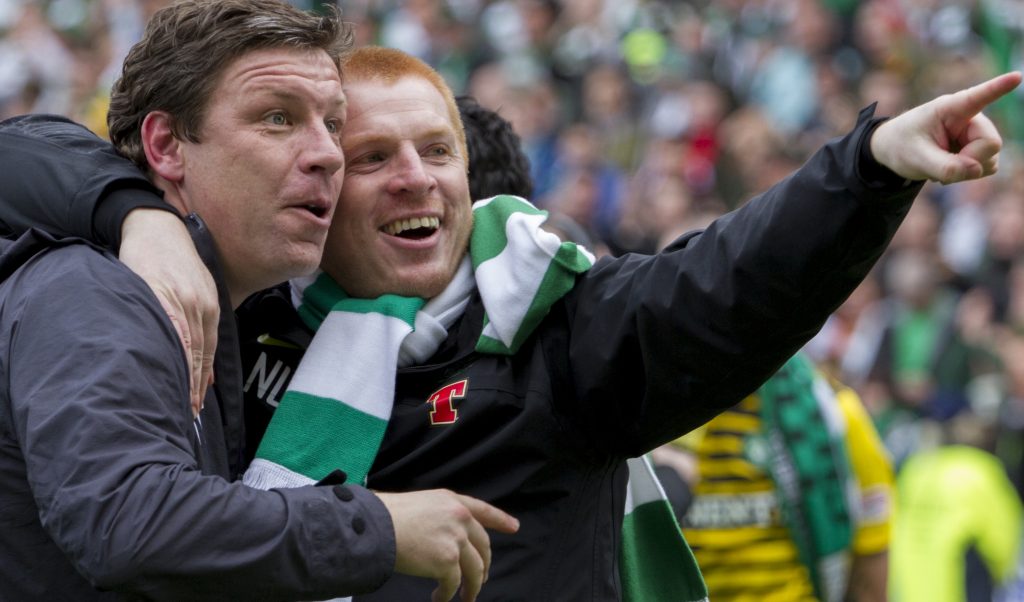 GETTING TO THE POINT…Neil Lennon with No.2 Alan Thompson after the title success at Rugby Park. 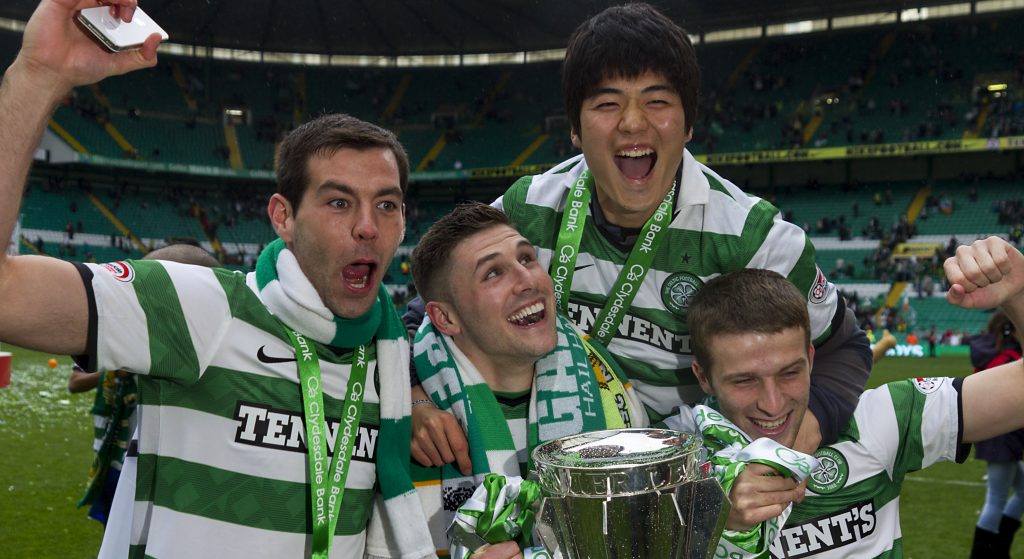 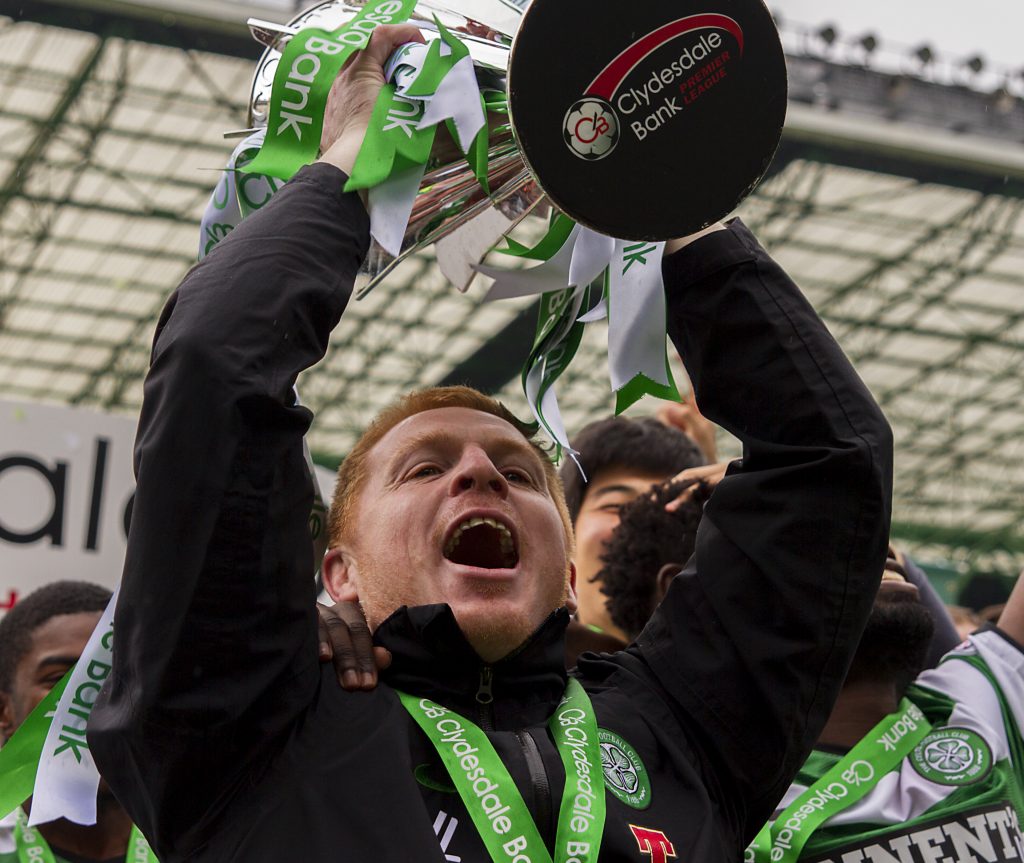