Celtic Quick News on News Now
You are at:Home»Latest News»HOWE: ‘MAYBE IT WAS TOO BIG FOR HIM,’ SAYS STUBBS
By CQN Magazine on 29th May 2021 Latest News

The former Hoops central defender was not convinced the ex-Bournemouth gaffer was the right man for the club, escpecially after hesitating over such a lengthy period.

The quest for Howe as Neil Lennon’s long-term successor has been ongoing for three months, but came to an end last night when the Parkhead outfit said they would be looking elsewhere for their new man.

One-time Hibs, Rotherham and St Mirren boss Stubbs admitted: “It doesn’t look great for both parties. If I was the Celtic board, I would be absolutely fuming.

“I can also understand fans being furious at the board for letting Howe put them in a vulnerable position.

“They put all their eggs in one basket and now are three months behind. Celtic identified their man and they must have thought they were in a great position to get him.

“In a way I am glad because anyone who wants three months to decide whether they will become Celtic manager is not the right guy. 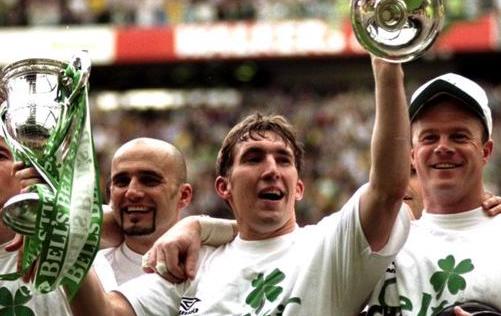 MARK OF A WINNER…Alan Stubbs enjoys silverware success at Celtic.

“As the weeks went by, something didn’t seem right to me. For Celtic to allow one individual to dictate where they go next was surprising, especially when he wasn’t working.

“I just think it wouldn’t have been the right appointment.”

Stubbs added: “It would have been his biggest job to date by a mile. Wherever he goes next, whether that be Crystal Palace or somewhere else, it will not be a patch on Celtic.

“Yes, Palace might be a Premier League side, but we are talking about one of the biggest clubs in the world here. Maybe it was too big for him and maybe Celtic have had a result out of this.

“In terms of fan base and pressure, this would have been huge.

“But Celtic are not going to fall apart because Eddie Howe has turned them down.”

The Hoops will continue their bid for a replacement for Lennon and one name that has emerged virtually overnight is that of former Australian coach Ange Postecoglou, as CQN reported earlier today.