Celtic Quick News on News Now
You are at:Home»Latest News»HOWE ON THE BRINK: WHAT HAPPENS NEXT?
By CQN Magazine on 2nd April 2021 Latest News

CELTIC could be in position to rubber-stamp Eddie Howe’s appointment as new manager within 48 hours.

Hush-hush negotiations between the former Bournemouth boss and powerbroker Dermot Desmond and the Hoops hierarchy have taken place in London this week, as CQN reported last night.

Details have still be finally agreed before there can be any announcement to the identity of the successor to Neil Lennon who departed the club in February.

Forty-three-year-old Howe wants former Scotland international midfielder Richard Hughes to join him and oversee a total rebuild at the club, according to the Daily Mail.

The former Portsmouth and Bournemouth star, who is known to have Celtic leanings, is the preferred option to take things forward off the park after Nick Hammond, head of football operations, left earlier this week. 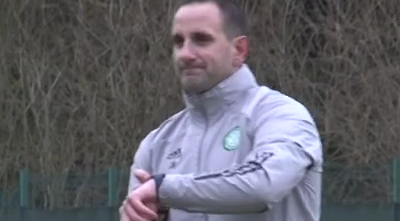 TIME’S UP? John Kennedy will figure largely in the Celtic shake-up.

Howe and Hughes worked closely at the south coast club during the club’s amazing rise from League Two to the Premier League.

Ex-Celtic striker Mark Burchill, another who had a spell at the Vitality Stadium outfit, may also be in line for a scouting post in the massive background shake-up.

There will be question marks over the futures of John Kennedy, who has been in charge in an interim capacity for the past three games since Lennon’s exit, and Gavin Strachan, who had to step into the dug-out for the games against Hibs and Livingston in January in the fall-out of the Covid crisis with 13 players and the management duo forced to self-isolate following the ill-fated Dubai trip.

However, it appears Howe would have no problem with Kennedy and Strachan remaining in their posts at the club.

The Englishman could then turn his attention to the transfer situations regarding Odsonne Edouard, Kristoffer Ajer and Ryan Christie who have been linked with moves away from the club with all three players having just over a year to run on their contracts.

There is also the position with the loan players such as Shane Duffy (Brighton), Diego Laxalt (AC Milan), Jonjoe Kenny (Everton) and Mohamed Elyounoussi (Southampton) to be addressed.