Celtic Quick News on News Now
You are at:Home»Flashback»TREBLE TREBLE: ‘I AM NEVER NERVOUS,’ EDOUARD
By CQN Magazine on 25th May 2020 Flashback

ODSONNE EDOUARD looked surprised when the TV interviewer asked him if he was on edge before he took the crucial penalty-kick against Hearts yesterday.

Celtic were trailing 1-0 to a Ryan Edwards strike shortly after the interval and ambitions of achieving the unprecedented treble treble were on the brink.

The champions urgently required a lifeline in the Scottish Cup Final as they attempted to clinch the old trophy for the third time in a row for the first time in their history.

Edouard was tripped by Bobby Zlamal as he ran on to a ball from Jonny Hayes and referee Willie Collum had no hesitation in pointing to the spot.

It was just after the hour mark on a tension-laden afternoon in the south side of Glasgow and the sell-out crowd were silent as the 21-year-old club record signing placed the ball, took a short couple of steps back, ambled forward and struck a shot low and hard to the keeper’s right where it nestled in the net for the vital equaliser. 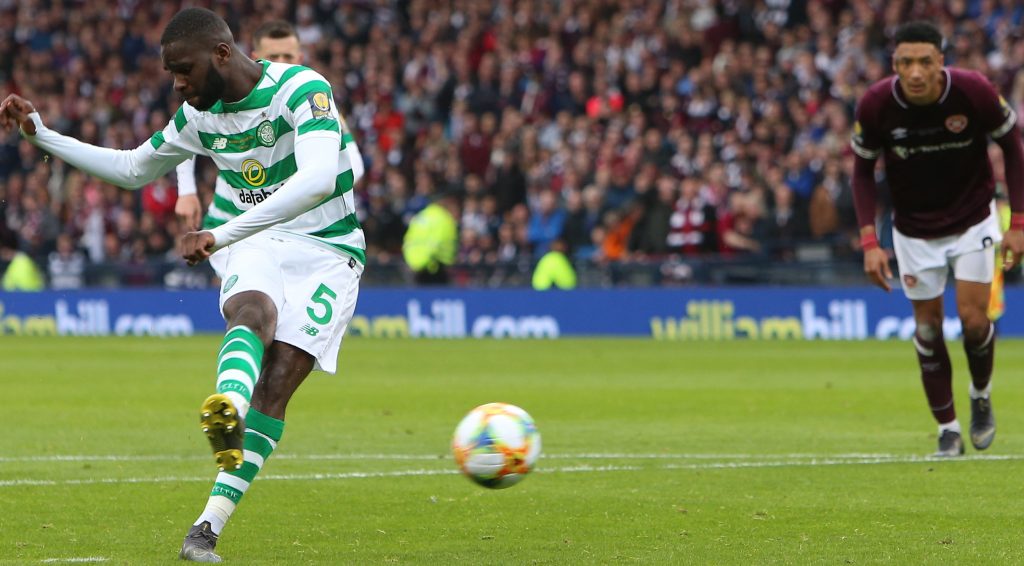 BY THE RIGHT…Odsonne Edouard slams in the leveller with Sean Clare looking on.

It was all very nonchalant and Edouard, afterwards live on BBC Scotland, smiled when he was asked the question and answered: “I am never nervous. So, when I took the penalty I believed I would score. I was confident.

”It’s been a hard time, but it’s only the coach who has changed. The players are the same.”

“I have just been told about the manager and it’s good news. This is a good achievement for the players and I’m very happy to work with the coach.”