Celtic Quick News on News Now
You are at:Home»Latest News»‘I CANT WAIT FOR NEW SEASON,’ SCOTT ALLAN
By CQN Magazine on 26th May 2016 Latest News
SCOTT ALLAN made only three starts for Celtic after his £300,000 move from Hibs in the summer.
However, the midfielder insisted he has no regrets over the switch – because he reckons he has improved as a player.
Allan struggled for game-time with Ronny Deila in charge, but is hoping for better luck during the Brendan Rodgers reign.
The 24-year-old playmaker said: “People will look at the season as another one out of my career when I could have been playing every week, but I felt it was the right thing to do.
“I have developed other things in my game that I wouldn’t have done had I stayed in the Championship and, hopefully, that will stand me in good stead fo 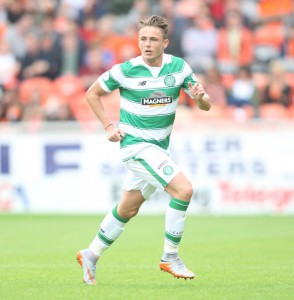 “I have a far better work ethic than I had at Hibs. When you are doing well every week, you get into a comfort zone and can go through the motions in training, so when you are not playing it keeps you hungry and you work even harder.

“It was tougher at West Brom when I left Dundee United four years ago as I was away from home and I didn’t have my friends or family around me.

“It’s been tough in terms of football as I’ve worked hard every day and not got the reward with a run of games.

“When I started against St Johnstone recently, I wanted to have a bigger impact, but I hadn’t played for that long so it wasn’t to be.”

Allan is confident he can impress new boss Rodgers as the Hoops set their sights on their sixth successive title as well as making an impact in Europe.

He said: “To be honest, I can’t wait and, hopefully, I can get some good pre-season games under my belt, get into the team and have a run.
“The fans have seen nowhere near my best. It took some time for me to get into my stride at Hibs and they saw the best of me and I hope it will be the same here.

“It’s a fresh start and there will be a few players, including myself, who will want to catch the new gaffer’s eye.”

* Check out the full Scott Allan interview in this week’s Celtic View, on sale now.
————————————————————–
Charlie Gallagher? What a Player! is the brilliant new book from CQN Books. The book is written by David Potter with forewords from fellow Lisbon Lions Willie Wallace and Tommy Gemmell. Order now and you will receive a SIGNED copy PLUS a FREE copy of The Winds of Change. Order direct from CQN HERE.