LIAM SCALES contrived to achieve something in six minutes against Dundee United that Kyogo Furuhashi failed to do in the entire game – score a goal!

The young Irishman was barely on the pitch as a 75th-minute substitute for Greg Taylor when he rattled in No.3 at Tannadice yesterday.

Scales, a £600,000 recruit from Shamrock Rovers in August, strode onto a pass from Liel Abada to hit a controlled left-foot drive from 16 yards low past the helpless Benjamin Siegrist.

The Hoops had toiled to add to the scoreline after Tom Rogic and David Turnbull had made it 2-0 at the interval. 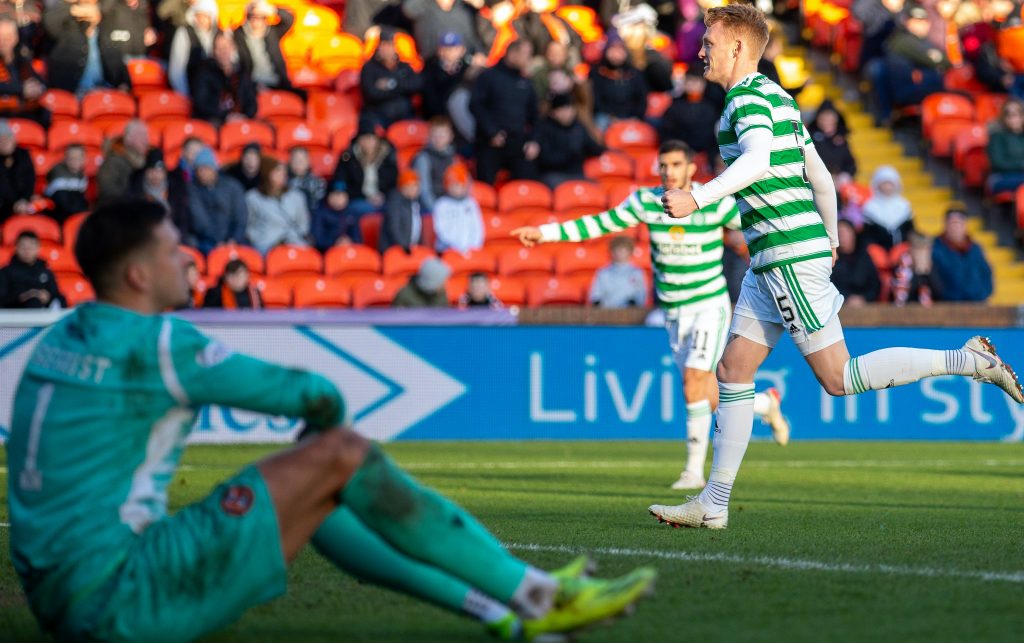 Siegrist was under siege, but his goal remained intact for 81 minutes of the second period until Scales appeared on the scene to score on his first Premiership appearance.

His family and friends missed his big moment, but the versatile 22-year-old Republic of Ireland squad player said: “Unfortunately, they couldn’t make it over, but my phone was hopping, I was all the way back to Glasgow replying to messages.

“As a defender, you don’t get many chances to run on to the perfect ball on the edge of the box.

“I was just thinking ‘Shoot’ and thank God it went in! 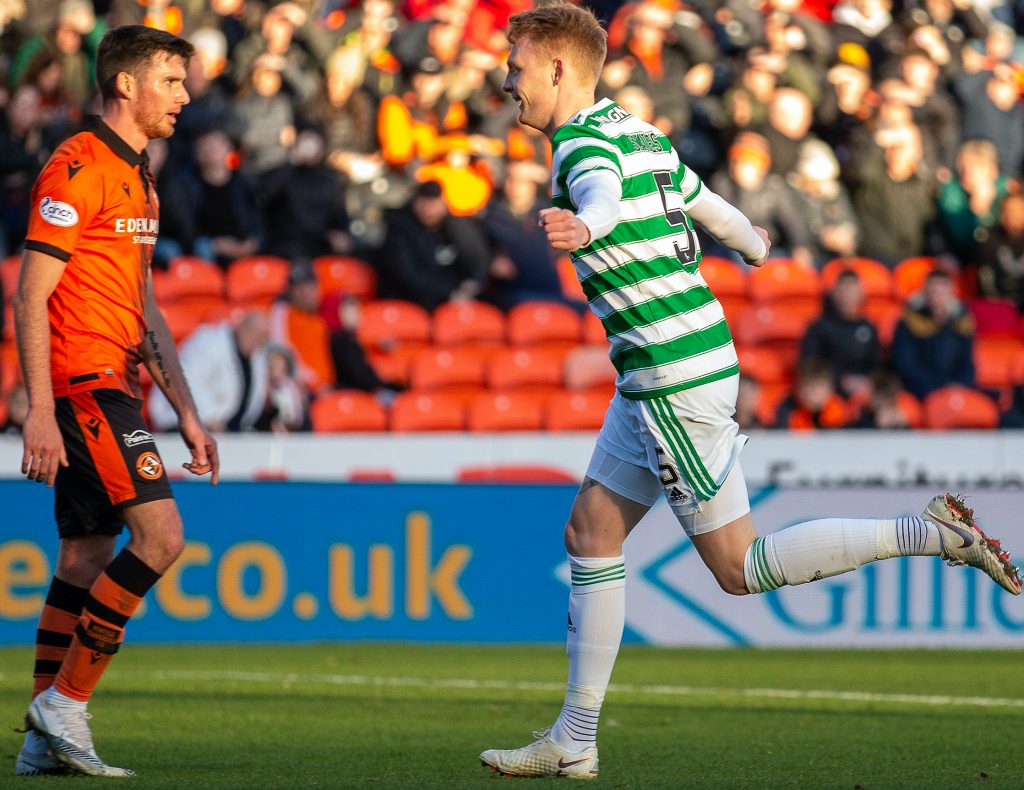 “It just sat up perfectly for me. I was running at speed, so it was just a case of directing it on target.

“I was buzzing when it went in. It was a great feeling doing it right in front of the fans.

“I just kept running towards them. The reception I got was great, I was delighted.”

Ange Postecoglou could now give Scales a start against Real Betis in the final Europa League Group game at Parkhead on Thursday night and the defender, who can play centre-back or on the left-hand side of the rearguard, said: “Hopefully, that’s the case. December is a busy month, so there will be changes and chances for everyone.

“It’s a massive month for us as a team and we are all in it together to make a proper push and collect as many points as we can.

“Obviously, I want to be a part of that. I did my best out there today.” 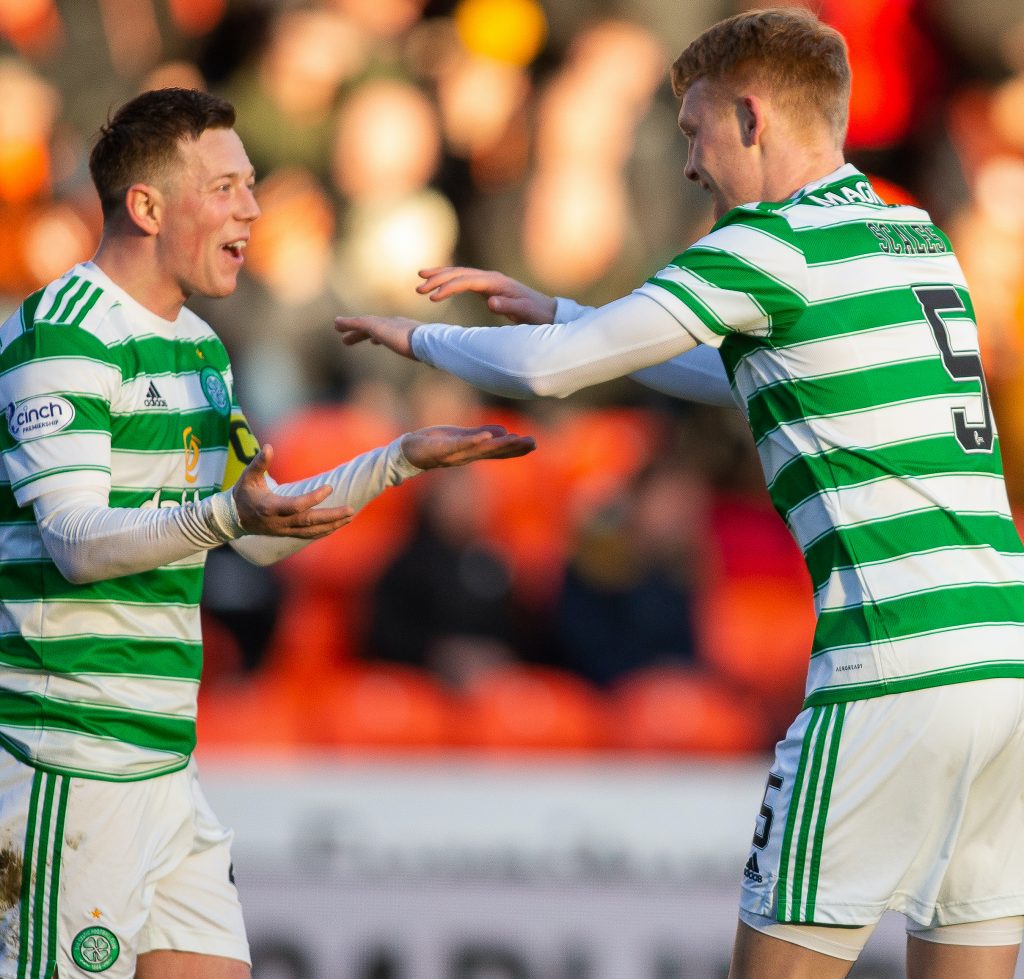 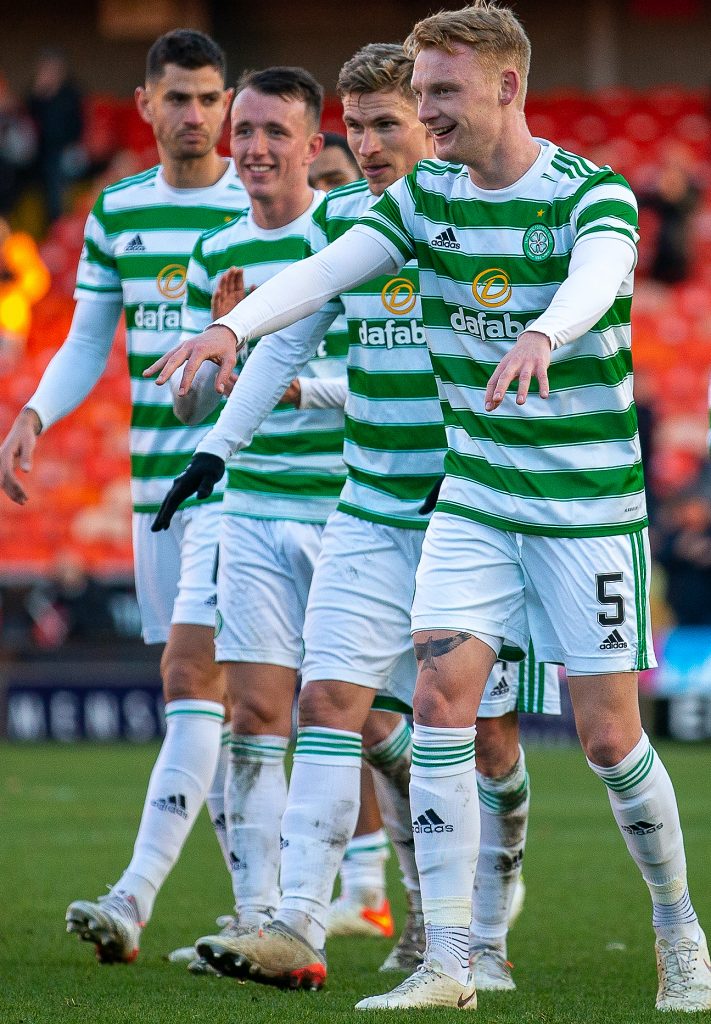 CHEERS…Liam Scales leads Nir Bitton, David Turnbull and Carl Starfelt as they celebrate with the Celtic support at the end of a well-deserved Tannadice triumph.

Scales, speaking to the Daily Record, added: “It’s a step up coming to Scotland, especially at Celtic where the physical and technical demands are so high.

“I’m learning every day and it’s so enjoyable.

“The standard of the squad, it’s going to be difficult to get chances regularly. There are only 11 spots on the pitch.

“I can only do my best when I get my chance and I was happy with how it went on this occasion.”