WIM JANSEN was named as successor to the popular Tommy Burns in July 1997 – and was tasked with preventing Walter Smith’s Ibrox outfit from claiming a historic tenth successive title.

The Dutchman was more concerned with guiding Celtic to THEIR first championship in a decade.
Author Alex Gordon investigates the glorious season of 1997/98 in depth in his latest Celtic book, ’50 Flags Plus One’, his fifteenth tribute publication to the Parkhead club.
Alex, a former national newspaper sports editor, writes with insider knowledge on a monumental campaign for the incoming Hoops manager and a newcomer by the name of Henrik Larsson.
Here is an edited chapter from the book. Enjoy!

IT BEGAN with Henrik Larsson gifting the opposition the winning goal and continued a week later with Wim Jansen stoically staring from the dug-out as his team feebly collapsed to defeat during his debut Premier League encounter at Celtic Park.

Ten years of misery, a decade of anguish, an interminable period of suffering in football’s version of Purgatory came to a shuddering halt in the east end of Glasgow on Saturday May 9 1998. Dutchman Jansen had succeeded where the three previous inhabitants of the Parkhead hot seat – Liam Brady, Lou Macari and Tommy Burns – had proved to be deficient; the Premier league championship would be welcomed back to Paradise for the first time since 1988.

The last day of the programme was heading for a nerve-shredding crescendo and the position was clear: if Celtic, already two points ahead, beat St Johnstone by any margin they would be crowned champions of Scotland. Rangers, who commenced the campaign firing out vainglorious promises of a world record ten titles in a row, were due to play Dundee United at Tannadice and the outcome would be rendered irrelevant if Jansen’s team avoided disaster against the visiting Perth outfit.

Tension came close to suffocating Celtic Park where a capacity 50,500 crowd sang a booming version of “You’ll Never Walk Alone”, the lusty lyrics bouncing around the stadium and beyond, long before the kick-off. Even Celtic’s King of Cool Henrik Larsson admitted to being “a little bit nervous” as he waited in the tunnel before racing onto the pitch to a tumultuous welcome. 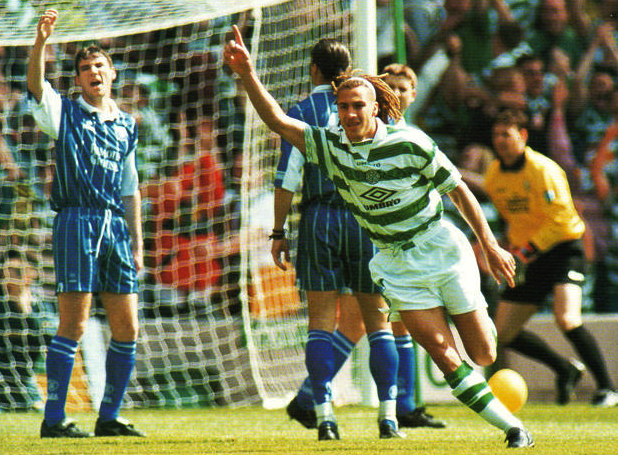 WE’RE ON OUR WAY…Henrik Larsson races away after scoring the breakthrough goal against St Johnstone.

Inside three minutes, the composed Swede had presented Celtic with the start they could only have dreamed of on this most crucial of afternoons. A misdirected kick-out from Saints keeper Alan Main dropped to Paul Lambert on the halfway line and he wasted no time in switching the ball to the roaming Larsson on the left. Immediately, he got into his easy-going fluid stride as he took the ball towards right-back John McQuillan.

Larsson shaped to go wide and hit the bye-line, but changed direction to glide inside. The defenders backed off and the graceful frontman took a few touches before he was satisfied an opening had been presented. Without pausing, Larsson curled a spectacular effort with immaculate precision from twenty-five yards and the ball arced and plunged past the diving Main as it swept in at the left-hand post.

The goal should have eased the apprehension in the electrifying atmosphere with so much at stake, but there were still obvious signs among the players with the threat of a mistake an intolerable burden. Larsson came within a whisker of providing the safety net of a second goal as he again cut in from the left to leave Main stranded with a deft flick. Unfortunately, the ball drifted just over. News filtered through that Rangers had taken the lead on Tayside through Brian Laudrup and that added to jangling nerve-ends of the players on the pitch and the supporters in the stands, both united in anxiety.

On the hour mark, with Rangers now 2-0 ahead following a Jorg Albertz penalty-kick, Jansen replaced midfielder Phil O’Donnell with striker Harald Brattbakk in an ambitious move designed to help the side in the pursuit of a second goal. The Norwegian was undoubtedly an enigma whose style mystified the fans and probably his Head Coach, too. He had the ability to seek out good positions in even the most crowded of penalty boxes, but his finishing touch was often lacking.

Before the Saints match, statistics showed he had scored in only two league games out of seventeen appearances – four goals against Kilmarnock and the double against Dunfermline. Jansen, by his own admission, was not a betting man, but he was willing to gamble big-style on this occasion.

Twelve minutes after his throw of the dice, Brattbakk scored to push Celtic towards the thirty-sixth title triumph in their history. And the £2.2million man tucked the ball away with the accomplished artistry of a performer who gave the impression he rarely missed. Tommy Boyd got the ball rolling by picking up a stray pass deep in his half before launching on an adventurous thrust down the right wing. 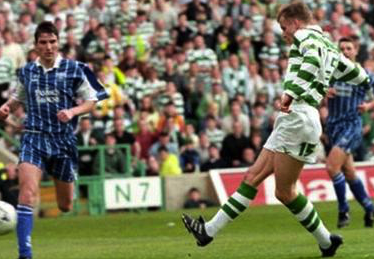 A DECADE OF WAITING IS OVER…Harald Brattbakk fires in the second and decisive goal against St Johnstone.
He played the ball in front of Jackie McNamara who maintained the pace of the move as he sped away from Allan Preston. Brattbakk’s timing in entering the danger zone was excellent as was McNamara’s low ball across. The puzzling hitman didn’t have to break stride as he met the ball sweetly with his right foot and his low effort eluded Main. There were still eighteen minutes to play, but there was no way Celtic were going to fail to win the glittering prize that had eluded them for what felt like an eternity.

Skipper Boyd was shaping to take a free-kick wide on the right when referee Kenny Clark stepped forward, picked up the ball while simultaneously blowing for full-time. The defender turned towards the fans, yelled and raised his arms in salute.

The wait was over. The title was coming home to Paradise.
Larsson, who scored nineteen goals in his debut season in Scotland, couldn’t stop grinning when the TV interviewer grabbed him just minutes after the final whistle. Swiftly, he paid tribute to Wim Jansen. “He is the main reason we have won the Championship. He has built a tremendous side and we’ll be even better next season,” beamed Larsson.
He waved to the cavorting masses and added: “Look at those fans – magnificent! I love it…I love it.”