CELTIC defender Kristoffer Ajer insists playing at international level is a stroll in the park compared to performing for a “crazy big club” every week.

The 20-year-old Norwegian centre-back has quickly become a key player for manager Lars Lagerback after making his debut against Australia in March.

Ajer has played every minute of the last six games for his country and only sampled defeat for the first time in Sunday’s 1-0 Nations League clash in Bulgaria.

He said: “At Celtic, I play in big matches, play many games a year and learn from a fantastic manager. I’m in a great place where I primarily play in a crazy big club where you are under pressure every weekend.

“I’m still humble and know that I have to be 100 per cent to handle it. But I manage to keep calm.

“I also learn every training with a very good support coaching staff with a lot of routine and not least I am part of a very competitive group.

“It is certainly very positive to be at Celtic.

“I’m really pleased to be here. When you go to Celtic Park in front of 60,000 people, it’s one of the biggest things you can experience in football. 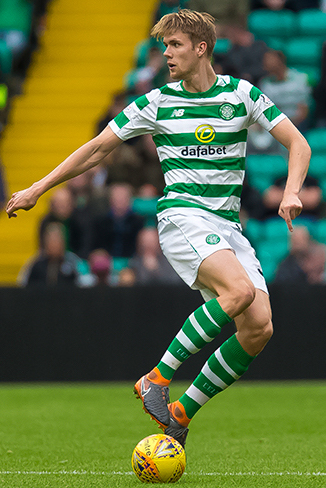 FIRST CLASS…Kristoffer Ajer turns it of for Celtic.

Ajer was a team-mate when they were at IK Start and he said: “Kristoffer has been brilliant for Norway. He came in to the side and has already established himself as the first-choice centre-half.

“He has handled it so well. It’s no surprise. Kristoffer has been a man on a mission since he was 16 – and my guess is he is a future Norway captain. You can see he is a good leader.

“He is tall and strong, at the same time he has skills with ball and is good with his head at offensive balls.

“He grew a lot after the loan to Kilmarnock and even more so playing so much last season for Celtic.

“Don’t forget, it’s not any club we’re talking about here. He fits into Brendan Rodgers’ game style and has received praise and good feedback from him.

“Rodgers obviously trusts him in the big games in Europe and in the Old Firm.

“I’m not surprised by the way he has made the step up to the Norway side. When we played together at Start it was clear he was going to be a top player.

“But you can see how well he has developed in the last year. Lars Lagerback has been very impressed by him and it’s easy to see why. You don’t see guys his age coming in and claiming a starting role so soon.

“When you look at his attributes, it is inevitable one day a big-money offer will come in for him, especially when you see the finances in England.

“You have seen other players make the move from Glasgow to England and I think he will do well for Celtic in the short term and make them a lot of money in the future.”