The Celtic striker, who claimed 17 goals in his debut campaign after netting only one in the first half of the season, bulleted his nation into the lead with a flashing header in the 71st minute.

And Giakoumakis admitted it was a weight off his mind to be able to get on the scoresheet again for his country.

The 27-year-old frontman’s sizzling effort ensured promotion to the Nations League B sections after a fortnight which has brought four successive wins for the team revitalised under Gus Poyet.

Giakoumakis burst onto the international scene in November 2020 when he claimed a debut strike in a victory over Cyprus.

However, since that breakthrough effort, the powerhouse hitman, who has won 11 full caps, had been unable to add to his tally – until last night.

Despite topping the league scoring charts with VVV-Venlo and the Hoops in the Netherlands and Scotland in successive terms, the energetic raider had not been able to notch again for his country.

But Giakoumakis overcame the hoodoo with his spectacular header only 12 minutes after coming on as a substitute.

Speaking of the sequence of blanks, the title-winning frontman said: “It is definitely something that bothered me a lot.

“It bothered me because I was coming from two positive seasons.

“I feel obliged to score, but it did not work out in my first games, I did not have a clear mind. In my mind, I had to score and I’m glad I did. 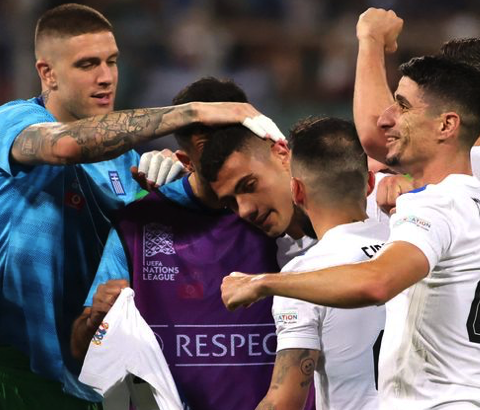 NATIONAL TREASURE…Giorgos Giakoumakis is congratulated by his Greek team-mates after his barrier-breaking goal.

“In the first matches, we could have scored more times and I really wanted the goal.

“Scoring with your club is beautiful, but with your country, it is special and different. I am very happy

“I needed the goal, I was looking forward to this moment and I am happy.

“I will definitely always try to help my team. The only thing I thought was missing was the goal, something that people know completes you as a striker.

“From the moment the goal came, I tried to help for the rest of the game.”

The 22,000-capacity Panthessaliko Stadium in Volos was packed to see Giakoumakis and Co get the job done in C Division with two games to spare. 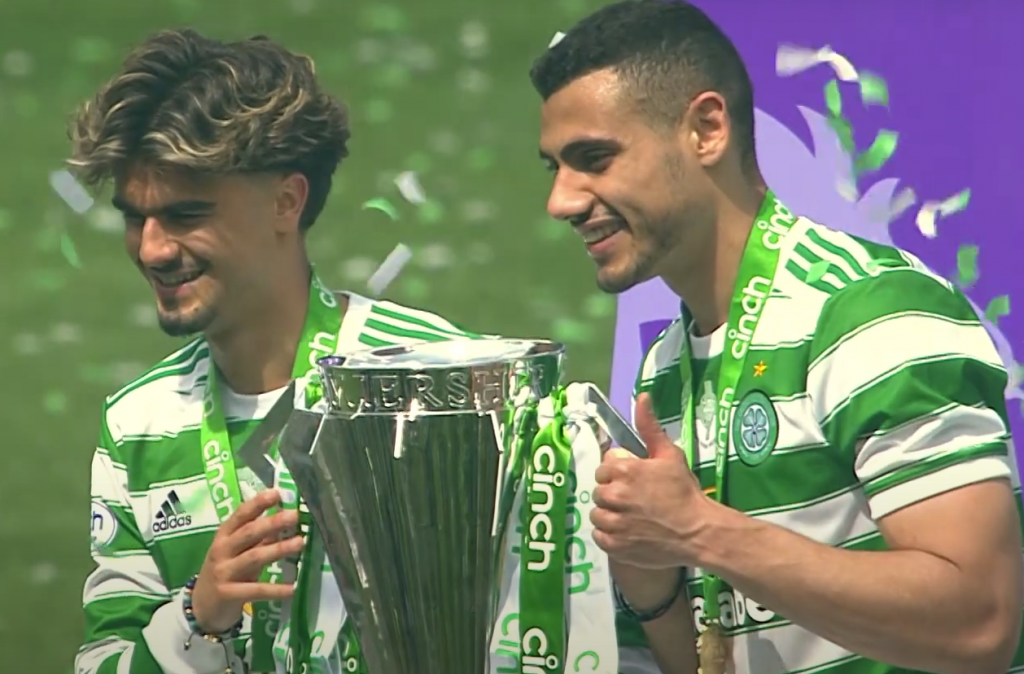 SILVER CELTS…Filipe Jota and Giorgos Giakoumakis with the Premiership trophy.

Greece are now chasing a record they set back in 2013 six consecutive wins and the £2.5million purchase in August last year, speaking to the Daily Record, added: “We believed a lot in our potential from the first day we met, but it has definitely come faster than we expected.

“We deserved it 100 per cent and we rightly took the first place in the group. In every game we have creation. Not too many opportunities, but enough to win with a bigger score.

“We had so many people by our side and we thank them for that. The area always shows that their people are beside the national team and I hope that, in the big cities, the people will be by our side.”