The on-loan Southampton forward tuned in his most impressive performance since his August arrival as he fired the Hoops into the December 8 Final.

As well as notching a double, Elyounoussi also had a hand in Scott Brown’s two strikes, but he still wasn’t entirely satisfied at full-time.

He was out of luck at the start of the second-half in his pursuit of a hat-trick when he superbly tricked his way past defender Tom James to thump a left-foot drive away from Chris Maxwell only for the ball to thud against the inside of the left-hand upright and bounce straight back into the relieved keeper’s harms.

Elyounoussi, speaking to the Sunday Mail, said: “I would say I’m getting towards 100 per cent with my performances now.

IN THE AIR…Mohamed Elyounoussi nets the first goal with Odsonne Edouard and Callum McGregor getting a close-up view.

“But I’m getting back to where I was a while ago. I’m feeling really good and the boys are playing me in to good positions.

“I enjoy playing in this team and we’re in a really good place. In the league, this Cup, the Europa League, we’re doing well so it’s a good time to be a Celtic player right now.

“But I’m frustrated at my missed chances. I’ve been close twice now to scoring a hat-trick, first in the  league and now in the Cup.

“So, that frustrates me, of course, because I’m hungry and I always want to score more goals.

“But I suppose I have to be happy that we achieved our goal to get to the Final. I’m here to score goals, but also to win titles.

“I set high standards for myself and as an attacking player, I always want more. But I’m happy to get the two along with Broony.”

The Norwegian international agreed a season-long deal when he arrived from the Premier League outfit after being frozen out at the south coast outfit who paid £16million to Basel for him last summer. 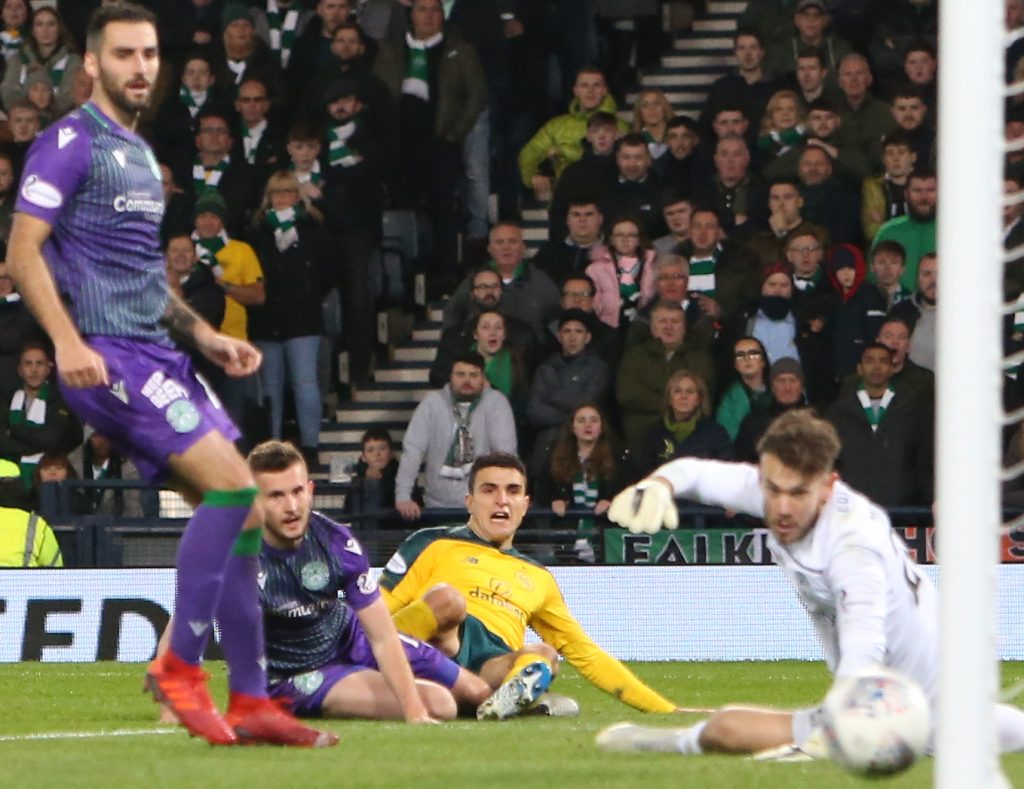 ON THE DECK…Elyounoussi stabs his second goal beyond Hibs keeper Chris Maxwell.

He added: “Celtic have now won 30 Cup games in a row. That says a lot about the mentality and hunger of this team. We always want more.

“We had a good start against Hibs and wanted to kill the game as early as possible.

“But they were good and made it difficult at times for us. They came back twice, but we always felt in control and could have scored more goals.

“We have a lot of big games, but I’m enjoying it. We’re fit – the coaching staff make sure we’re ready for every game and that we recover well.

“We can enjoy this match, but then we have to focus on the next one.

“I came here to get more minutes and to become a better football player. I think the manager can definitely do that for me.”

GREAT SCOTT AT THE DOUBLE AS HOOPS HAVE FINAL SAY