Celtic Quick News on News Now
You are at:Home»Football Matters»‘I THRIVE ON PRESSURE,’ COMMONS
By CQN Magazine on 1st April 2016 Football Matters
KRIS COMMONS insists it’s time for Celtic get rid of the fear factor and prepare for 10 games that could bring the league and Cup double to Parkhead.
The Hoops are four points clear of nearest challengers Aberdeen with a game in hand, a fifth successive Premiership crown is within their grasp.

Victory in this month’s Scottish Cup semi-final would also put the champions on course for a second piece of silverware – their fourth in Ronny Deila’s two years in charge. 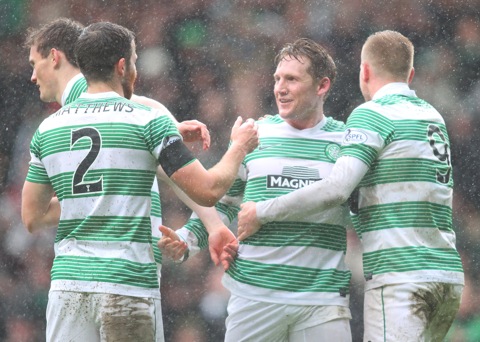 Commons said: “It has been a little while since there has been a party atmosphere.

“It’s getting to the business end of the season where you want to be putting on a show and you can sense a wee bit of nerves in the stands because of the situation we are in.

“There are a lot of people who are keeping an eye on Aberdeen and also looking towards the Scottish Cup semi-final. These are the sort of things that I thrive on.

“You have to go out there and show who you really are, use every ounce of experience you have and, hopefully, get across the line to celebrate.”

The cultured midfielder added: “From my first season being up here, I quickly realised things are won and lost on very fine margins.

“But we’ve got experience in the dressing room where people will be looking to the likes of Scott Brown, Charlie Mulgrew, Craig Gordon, myself, the guys who’ve been there and done it and it’s up to us to use our experience.

“If there are people who are on edge then we’re the ones that tell them they’re here for a reason.They’re all top-quality players and if we bring our A-game into every time then I’m sure we’ll be champions at the end of the season, but it’s not guaranteed.

”I managed to get away, recharge the batteries and I’m feeling good so, hopefully, all the boys will come back from international duty injury-free. 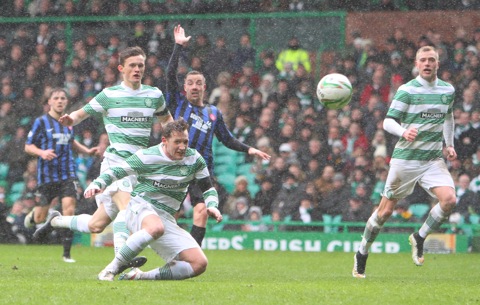 “We’ve got a big game against Hearts and it’s important now that we kick-on and try to get some momentum going. We’ve also got a semi-final coming up and with the title race being as close as it is at the moment, it’s important we start getting on a bit of a winning run.

“This match against Hearts is a really big one for us and we’ve got games coming thick and fast that are going to be crucial to where we want to be.

“The last game we played against Hearts in Glasgow was just frustrating. They defended well and rode their luck at times, but they could have nicked it towards the end of it to be fair, so we’ve got to be fully prepared.

“Against any team, if we can get an early goal it puts them on the back foot, especially at Celtic Park, but if we’re on our game we’ll cause them more problems than they will us.

“It’s about being mentally focused and trying to get the job done. You can’t count your chickens before they’ve hatched, but if we do go on to win the game, then Aberdeen’s whole thought process and mindset will be: ‘Right we need to win now just to maintain the gap’.

“If we lose, they’d be thinking they could get within one point and it gives them a huge boost. I’ve been in all different situations. I’ve been chasing and being out in front and there’s no question that when you’re in front and you keep pulling away it can do huge  psychological damage to those on the outside looking in.

“So for us we’re just going to concentrate on what we need to do. Hopefully, if we get the result, we can start pulling away and get on a roll.”

—————————–
HALF PRICE PIZZA!
Get half-price pizza if Celtic score twice against Hearts! Click on the link below to register…