Celtic Quick News on News Now
You are at:Home»Latest News»‘I WANT TO BE CELTS BOSS,’ BROONY
By CQN Magazine on 12th May 2018 Latest News

SKIPPER Scott Brown has revealed he wants to manage Celtic.

The inspirational midfielder, who will celebrate his 33rd birthday next month, has been at the Hoops for 11 seasons following his £4.4million switch from Hibs.

Brown now admits he would welcome the opportunity of moving into the Parkhead dug-out once his playing career draws to a close.

He said: “Who wouldn’t? Everyone would love this job: every fan, every manager – especially in Scotland.

“I’m not one to just sit about and chill, enjoy life playing golf. For me, I’m going to go into coaching.”

Brown is aiming to help guide the seven-in-a-row champions to an unprecedented second consecutive domestic treble, with a Scottish Cup Final against Motherwell due a week today.

He stated: “I had the chance through Celtic to go and help coach the Under-20s with Stevie Frail and Tommy McIntyre – and I jumped at the opportunity.

“I was doing my B-licence, so it was a great for me to help push through that. I really loved it, but it was just too much hard work doing that as well as coaching during the day; going to games at night, training during the day and then trying to focus on games on Saturdays and Sundays.

“I think the imbalance was just too much for me.” 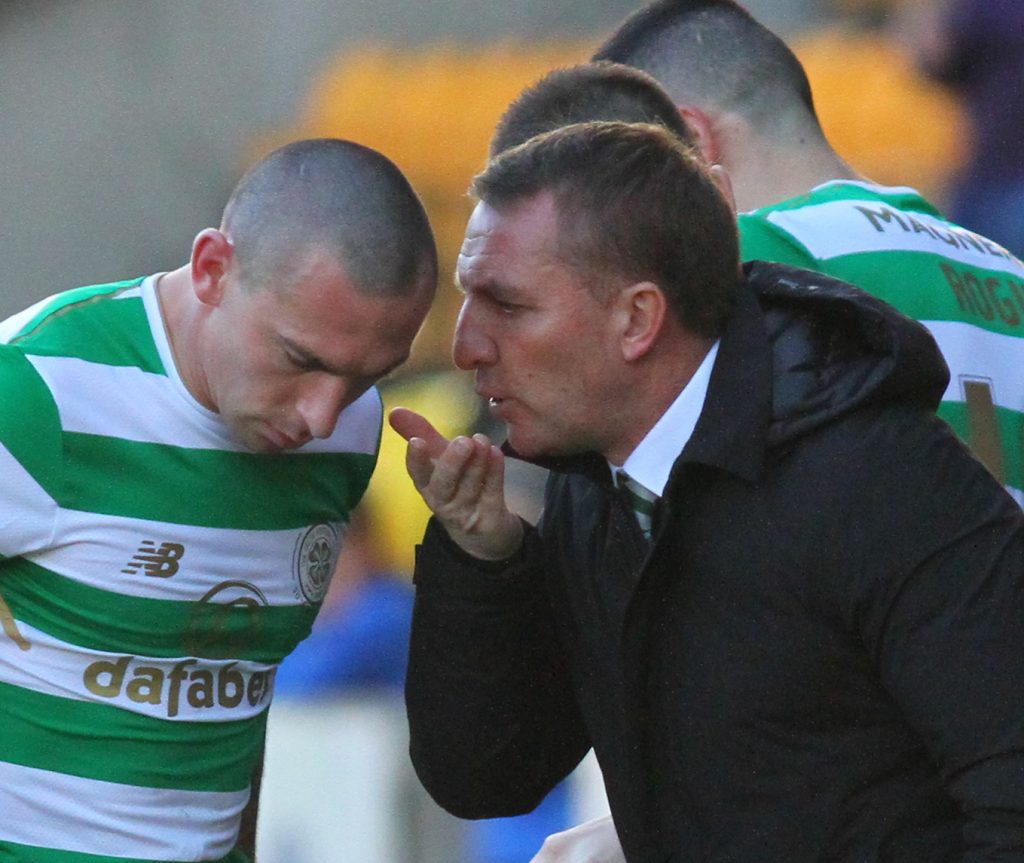 A WORD TO THE WISE…Brendan Rodgers passes on some instructions to skipper Scott Brown. Pic: Geo.

Brown admitted he has been massively impressed by Brendan Rodgers, who took over from Ronny Deila in May 2016 and has won all five of the domestic trophies that have been up for grabs so far.

The influential onfield leader added: “As you see, we got a top quality manager from England who almost won the Premier League with Liverpool.

“He wanted to come here, so it shows you the pull this club has got.

“I’ve seen a lot of managers come here and leave with grey hair. I’ve also seen managers love the job and I think Brendan is the perfect one for that and he seems to be thriving off it, coming up to Glasgow and just enjoying life and management – although maybe not enjoying the weather as much as down the road.

“It’s that love for the club and the desire to want it to do well – I’ve got that, too.”