FORMER Celtic midfielder Scott Allan has revealed he has a heart condition which threatened to end his career at the age of 29.

The ex-Scotland Under-21 star discovered the ailment earlier this season when he was substituted by Hibs boss Jack Ross in the side’s loss against Aberdeen – the third successive game in which he had been hauled off.

Allan, who was signed by Ronny Deila for the Hoops in August 2015 and returned to the Easter Road side in the summer of 2019, felt fatigued just six games into the new campaign and realised something was very wrong.

The skilful playmaker, who made only 17 appearances for the Parkhead side after his bargain £300,000 arrival, had come back for pre-season training and after a month admitted to “dizzy spells and feeling faint”. Allan, speaking to Sky Sports News, said: “I am a type one diabetic, so everybody assumes it is something to do with your diabetes. I knew something was underlying there.

“It wasn’t until we played Aberdeen and after 10 minutes, I felt physically drained. I remember getting subbed off and thinking: ‘I need to get to the bottom of this, I can’t continue to play like this’.

“We did extensive checks. I went to my diabetic consultant just to make sure that all that side was oaky, and it was. I went to Hampden Medical Centre to get the heart screening and they weren’t happy with the ECG (electrocardiogram).”

After being advised to stop training, Allan continued: “I did MRI scans and a few other heart tests, but everything looked okay. It was not until we did the exercise test, which is testing the heart under stress which relates to me playing football. In a relaxed state, you wouldn’t know there is a problem, but when we did the stress exercise test, that showed up cardiomyopathy.”

Cardiomyopathy is a disease that causes the walls of the heart to become too thick, restricting the blood flow around the body.

Allan, who has also played for Dundee United and West Brom while having loan spells at Rotherham, Dundee and Hibs during Brendan Rodgers’ reign, said: “You always think the worst, especially when it is something like a heart condition. It is a scary thing.

“It was just surprising because you go to these things, you do those tests and you think everything is going to be fine – you’re a fit professional footballer – but that wasn’t the case that day.” 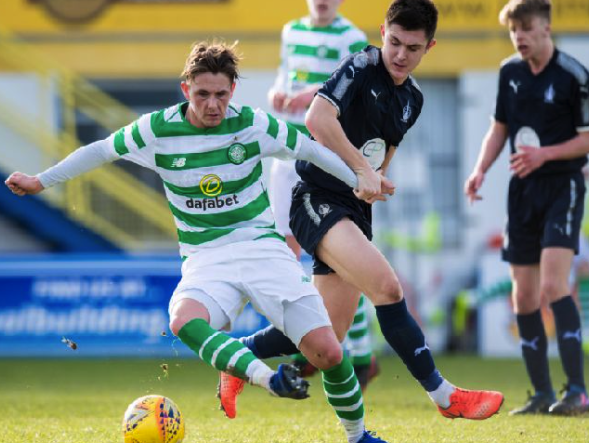 RARE APPEARANCE…Scott Allan made only 17 starts for Celtic in four years.

Allan, who won 10 caps for the young Scots and was tipped for great things as he emerged at Tannadice, commented: “In terms of my football career, I was fearing the worst. Going on how I felt in the previous months in terms of the symptoms, I wasn’t happy with how that was affecting me in a game. I was really concerned.

“I went to see all the medical staff at Hibs and from there, we arranged a second opinion and third opinion via a Zoom call with a leading expert in New York.

“I had spoken to a few other people that had the same condition in professional sport and they were back playing and managing it, so that gave me a lot of motivation moving forward.

“I did not get the second opinion until the end of November. It was basically three months of doing nothing. It came back very positive and that’s when the previous cardiologist got in touch and the two of them came up with a plan to get me back on the training park.

“I did a six-week mini pre-season, stage-by-stage building myself up to see how I would feel week-by-week and whether the symptoms would come back the harder the training got.

“Fortunately, I have not had any symptoms since I have been back and felt the best I have felt in my playing career in terms of controlling my diabetes and finding out that I have had this my whole career. ON THE RUN…Scott Allan in a race for the ball in Hibs’ 3-0 Betfred League Cup semi-final loss against St Johnstone this season.

“Now I know what I need to do so that I don’t have any symptoms. I am in a good place just now.

“I feel a lot safer knowing what the condition is and knowing what I need to do to manage it and make sure I don’t get those sorts of symptoms. I am excited about moving forward now in terms of my football career than worrying about what could have been.”

Going public with the heart condition was not something Allan did lightly, but the player wanted to highlight the issue and spread awareness among fellow-sportsmen.

He added: “I think the awareness is important to make sure every player is tested to the best possible quality from each club. I would not have known this had I not gone to the cardiologist in London, so I think that is a massive thing to know if anything is underlying.

“One opinion might not just be the definitive answer and that has certainly been the case with me, but it can be a serious condition. Some other player might not be as lucky, but you can overcome these things and forge a career for yourself.”

Watch the full interview via Sky Sports On Demand or on Sky Sports’ YouTube channel.