Celtic Quick News on News Now
You are at:Home»Latest News»‘I WAS HAPPY AT CELTIC,’ LARSSON EXPLAINS WHY HE REMAINED
By CQN Magazine on 26th February 2020 Latest News

CELTIC legend Henrik Larsson has revealed he was never tempted to quit the Hoops for a megabucks move to England.

The Swedish sensation spent seven years at Parkhead after joining from Feyenoord in a cut-price £650,000 switch in 1997.

Larsson, who claimed 242 goals for the club during the Wim Jansen and Martin O’Neill eras, was a long-time target for Manchester United manager Sir Alex Ferguson when he was in his prime.

However, he resisted any thoughts of a transfer across the border although he eventually caught up with the Scot at Old Trafford in a loan move from Barcelona in 2007 and scored one goal in seven appearances.

Asked if there was ever a chance for him to join a top English club, Larsson told Sky Sports : “There probably was, but I never got any information.

“I was never bothered about that because I was happy at Celtic.

“I was playing with the Swedish national team on and off, so I was in a happy place. 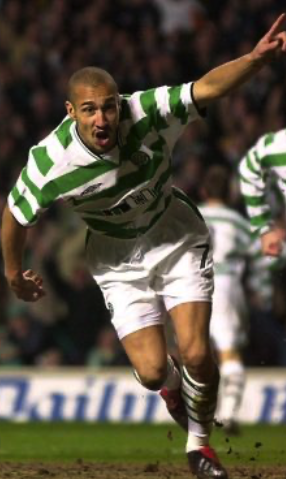 HOOPY DAYS…Henrik Larsson in familiar pose after scoring one of his 242 goals for Celtic.

“I was earning good money, it was a great contract that I had.

“So, to move down south for a few more pounds a week, it wasn’t interesting for me because I knew what we had at Celtic.

“I saw the manager (Martin O’Neill) and I think I started to understand his plan and what he wanted to do with the club.”

Larsson, 48, admitted he was shattered after the side’s 3-2 extra-time defeat against Jose Mourinho’s Porto side in Seville.

Larsson added: “There was a long time I couldn’t speak about the game, I couldn’t watch the game.

“I scored two great goals, that I can recognise now, but 10 years back it wasn’t something that I even looked at because it would’ve meant so much for the club and the fans. And obviously for us players.

“Everybody talked about the Scottish league being poor, how we couldn’t play and beat the English teams.

“They had good sides, it gives you an idea of what kind of team we had.”