Celtic Quick News on News Now
You are at:Home»Football Matters»‘I WILL FIGHT FOR MY PLACE,’ SVIATCHENKO
By CQN Magazine on 2nd July 2017 Football Matters

ERIK SVIATCHENKO has admitted he is ready to fight for his first team place at Celtic in the new season.

The big Dane missed out in the run-in to the season when Brendan Rodgers favoured Jozo Simunovic and Dedryck Boyata as his central defensive partnership.
There has also been speculation the Hoops boss is considering a move for another quality centre-back before the transfer window closes at the end of August.

Leicester City enquired about Sviatchenko last season, but he preferred to stay and help the champions to claim the historic treble.

He said: “I was, of course, aware of things in the transfer window, but that didn’t take away my focus.

“I am in a place where I have good players and coaches around me, they know me and I am the best player I can be so I am enjoying the time here. 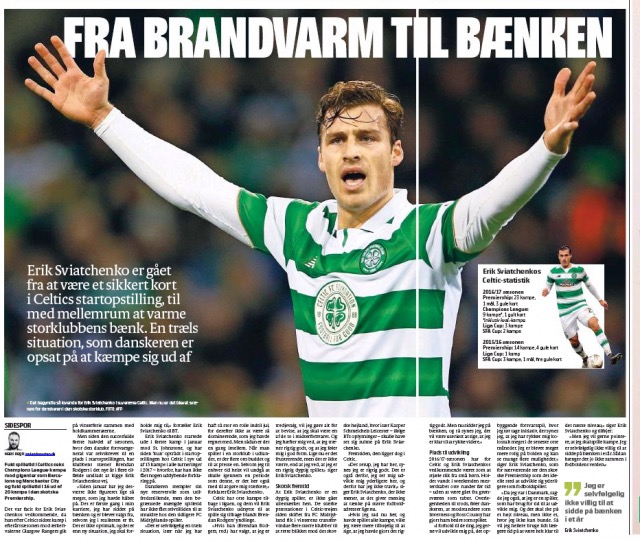 “Why have a rush to leave? I am really happy to be a part of this. I know that we have Dedryck, Jozo and Kris Ajer has come back in from Kilmarnock. I will always accept those terms.

“Competition makes you even more alert, maybe I need to be even better at things. I have spoken with the manager about that.”

Sviatchenko, 25, lost his place in the Danish national squad in recent months, partly through his reduced first-team exposure at Parkhead.
He added: “Of course, the national team will always be in my thoughts, but in that specific position we have so many good players.
“If you want to be one of them, then you need to be at your best and so club and country goes hand in hand.

“But I am part of history now. I was a member of an Invincible squad and that is something I’m really proud of.

“I played a key role, too, because I played over 40 games. When I am an old man, I will say to my son I played these games.”
CHECK OUT CQN Magazine later this evening for the latest edition of the CQN Podcast featuring among other items, an interview with the President of the SFA!
Meanwhile if you haven’t caught up with the latest edition featuring Lisa Hague talking about her family’s love of Celtic then the link is below.