SCOTT BAIN has revealed he feels a lot more settled at Celtic now his future has been sorted.

The keeper, who agreed a loan deal from Dundee in January, signed a four-year contract at the end of the season.

And the new Scotland international No.1, who played 90 minutes in the 2-1 win over BW Linz in a closed-door friendly in Austria yesterday, believes the Hoops fans will now see him at his best.

He said: “With the contract all sorted, it makes me feel a little more at ease than I was before.

“I know I am going to be here for a long time and I have really enjoyed getting back to the levels we had before.

“It did feel a little bit like a trial before. If you make a mistake, you think ‘Who’s watching?’. I got a few games and last year was great, but now I am here permanently, I feel settled.

“But it’s always a case of improving. It doesn’t matter what your levels are, you always strive to get better.” 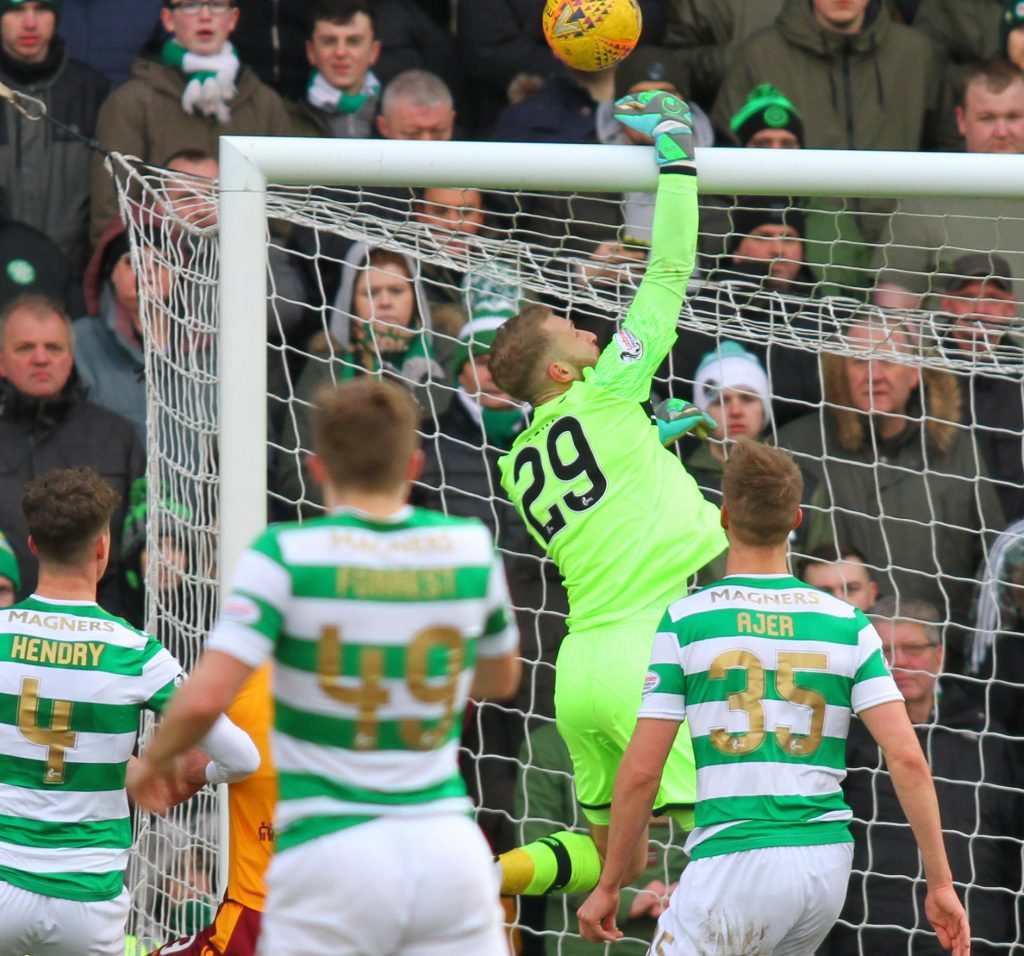 TOUCH OF CLASS…Scott Bain gets up to clear a cross against Motherwell in the goalless draw at Fir Park in March. Pic: Geo.

Bain faces a battle to wrestle the first team place from Craig Gordon, but has admitted he will fight him all the way.

And he reckons he can only improve working under the guidance of Parkhead goalie coach Stevie Woods.

He added: “Woodsy is at the top of his game in the goalkeeping coaching department.

“But even for the wider squad, he’s a guy who is appreciated as a person, as well as a top coach. Before coming here, I only knew Stevie from playing against Celtic with Dundee. We met after games, but had never had an in-depth conversation before I came.

“Celtic is a giant club and one that everyone wants to play for, but as a goalkeeper Woodsy is a massive part of that.

“It’s one of the reasons why you want to come here because he’s top notch. He’s very modern. He looks into a lot of things and analyses the position, so you can learn a lot from him.

“The manager hasn’t really give me any targets, but it is something that me and Woodsy will speak about in the coming weeks.

“As of now, it’s a case of working hard and doing as well as possible.

“Who will start? I’m not really sure, that’s up to the manager. He trusts me and Craigy and that’s a great position for him to be in.

“But it’s his decision and all me and Craigy can do is work as hard as possible and be ready.”