SILENCE wasn’t so much golden as baffling for Livingston’s goalkeeper hero Max Stryjek in the scoreless stalemate at Parkhead at the weekend.

The Polish netminder made certain the Celtic fans had nothing to shout about with his save from Giorgos Giakoumakis’ timid stoppage-time penalty-kick.

But Stryjek, who insisted he knew he would deny the Greek at the spot-kick, also admitted it was “a bit weird” that the stadium was so quiet for the first half-hour.

The 25-year-old shotstopper, who also had a shut-out against the Hoops in his side’s 1-0 win in West Lothian in September, said: “I have been here with a friend to watch them against Bayer Leverkusen this season and the atmosphere was unbelievable.

“It was so loud and I was thinking: ‘I would love to play here’.

“And then when I got here I was thinking it was going to be really hard with 60,000 supporters shouting and singing.

“But as the game started and for the first 30 minutes I realised there was no singing and it was very quiet.

“I didn’t know why, but then I heard later there was a protest. It was a bit weird, but then it all started getting very loud after 30 minutes and it was great. I really enjoyed it.” 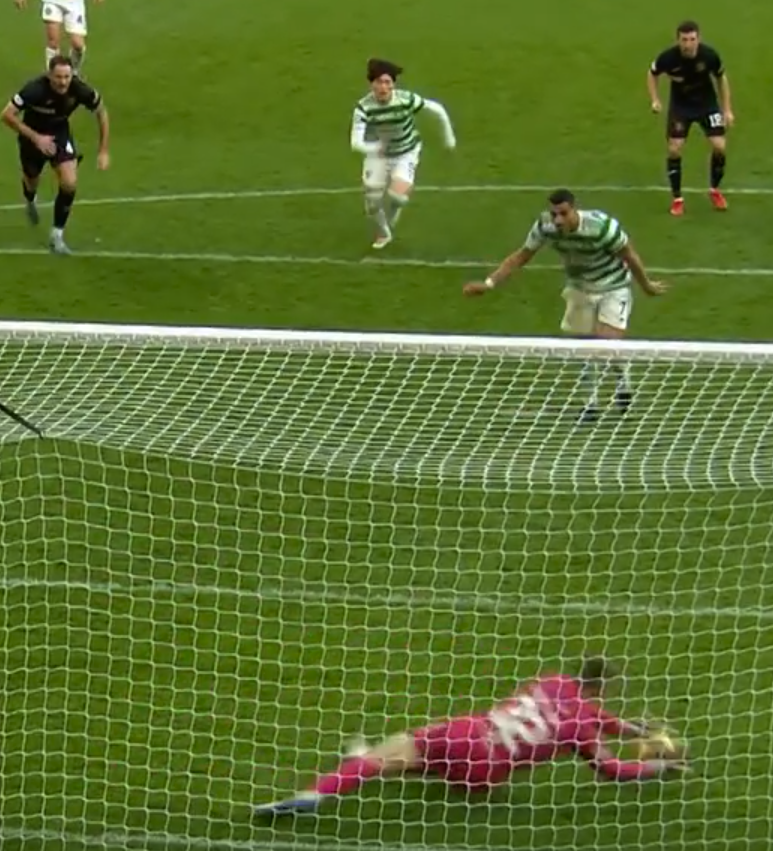 Reflecting on his penalty-kick save from Giakoumakis, Stryjek, speaking to the Daily Record, added: “I felt confident. I just felt something inside myself and I knew I was going to save it. I don’t know why.

“We analysed all their penalty-takers, but it is really hard to get it right because he can just go and put it in the other side and it is usually a goal.

“I just had a feeling he would put it to my right hand side and I saved it.

“I think Celtic only had one shot on target apart from the penalty, so we did well in general and defended our box really well.

“We did ever so well to get a point and I think we deserved it.”

HEADS YOU LOSE…Max Strykek is beaten by Anthony Ralston, but Jack Fitzwater clears off the line.

The only time Stryjek was beaten came in the first-half when Anthony Ralston swept in a drive from 12 yards, but it was headed clear off the line by Jack Fitzwater.

Now all eyes are on the Europa League Group G match against Ferencvaros on Thursday in Budapest where Ange Postecoglou will be hoping his players give the Hoops fans something to cheer.