Celtic Quick News on News Now
You are at:Home»Exclusive Series»IAN YOUNG: GREAT UNCAPPED CELTS (Part Two)
By CQN Magazine on 6th June 2021 Exclusive Series
CQN is turning the spotlight again on the Celtic players who never had the honour of playing for their country. Ian Young, the solid, unspectacular right-back who sadly passed away in December 2019 at the age of 76, never got the nod to get into a Scotland squad.
Young rarely hit the headlines with his steady, reliable defending on the right-hand side of the Celtic rearguard. He was content to be a dependable full-back who concentrated on making sure opposing left-wingers didn’t enjoy much success against the Hoops.
Here is his story in another EXCLUSIVE CQN feature.
IAN YOUNG launched himself into Celtic history by playing right-back in Jock Stein’s first success upon his return to Parkhead – the nerve-racking, but, ultimately, thoroughly enjoyable, 3-2 victory over Dunfermline in the 1965 Scottish Cup Final.
It was the Hoops’ first trophy triumph in eight excruciatingly long years since walloping Rangers 7-1 in the League Cup Final in 1957.
And, of course, it was the conquest over the Fifers that kicked off a magical era for the club as they reigned supreme amid an avalanche of silverware achievements, the tributes flowing on a weekly basis.
It was easy to be overshadowed in this Celtic line-up with the likes of Jimmy Johnstone, Bobby Murdoch, Billy McNeill, Tommy Gemmell, John Hughes and Bertie Auld lighting up football wherever they displayed their devastating skills, at home and in Europe. 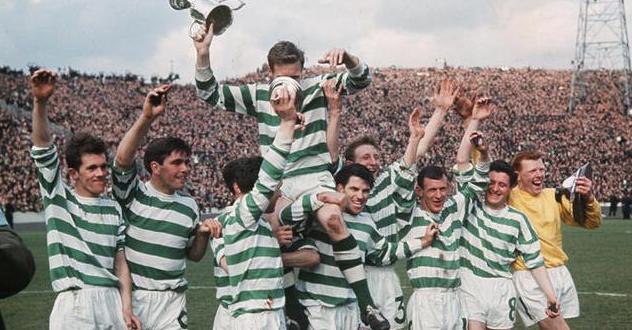 HAMPDEN HEROES…Ian Young (extreme left) celebrates with his Celtic team-mates after the dramatic 1965 Scottish Cup Final triumph over Dunfermline.
Truly, Ian Young, at right-back, was an unsung hero. He was eclipsed by the cavalier-like Gemmell on the opposite flank, but never complained about the lack of a spotlight and the adulation that goes with it. Young saw his job as a defender, first and foremost. He rarely stormed into attack and preferred his full-back partner to provide the spectacular touches from his berth. The fact that he netted a mere three goals – all of them penalty-kicks – in 164 games tells you all you need to know.
Young, who originally played at centre-half, replaced the more adventurous Dunky MacKay on the right side of the defence when he made his breakthrough in 1963, two years after signing from Junior side Neilston Waverely.
MacKay had been converted from an old-fashioned wing-half and still possessed natural attacking instincts which, it has often been said, drove assistant manager Sean Fallon, a former full-back, crazy in the dug-out. Sean was never a fan of full-backs crossing the halfway line and often threatened all sorts of retribution if they did not obey orders. It was just as well for Tommy Gemmell that Big Jock arrived when he did or we might not have had the privilege of watching a genuine world class star operate at the top of his game while terrifying opposing goalkeepers with his howitzer-like shooting from long range.
Young, much to Fallon’s relief, was satisfied to play his part in locking the back door. After replacing MacKay, who won 14 caps, it was expected that Young may also move into the international reckoning. For whatever reason, that call to represent his country never came.
On a more satisfying note, the player picked up a league championship medal and a League Cup winner’s badge in season 1965/66 to complete the domestic treble before moving to St Mirren in 1968. His time with the Paisley side was beset with knee injuries and he finally called it a day at the age of 27.
A cap would have been a nice reward for a great club servant.
Click Here for Comments >
Share. Twitter Facebook Google+ Pinterest LinkedIn Tumblr Email
Previous Article‘BEWILDERED’ LENNY ANSWERS ‘DINOSAUR’ JIBES
Next Article ANDY LYNCH: GREAT UNCAPPED CELTS (Part Three)