RYAN KENT has been charged by the SFA after punching Celtic skipper Scott Brown on the face during the champions’ 2-1 win at Parkhead on Sunday.

The Ibrox winger angrily lashed out at the Hoops midfielder and sent him crashing to the turf in the immediate aftermath of James Forrest’s winning goal in the 86th minute.

Kent was actually in the Celtic half when the incident took place with Steven Gerrard’s side waiting to recentre the ball for the kick-off.

The on-loan Liverpool star launched a fist onto Brown’s jaw, but, amazingly, not one of the four match officials, including referee Bobby Madden, witnessed the flashpoint. 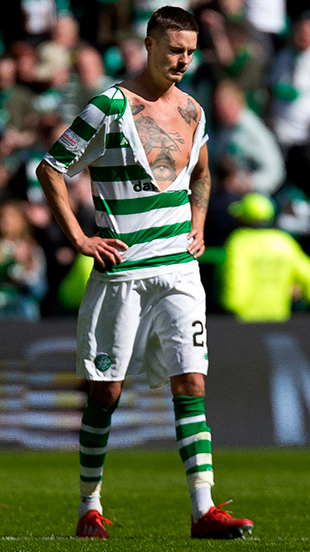 The controversial incident was flagged up to the SFA’s compliance officer and put forward to a review panel that has decided Kent has a case to answer at a hearing on Thursday.

It’s unclear how long a potential ban would be, but it could be longer than the normal two games normally offered for violent conduct, see Paul 67 today.

A suspension for Kent would be another huge blow for Steven Gerrard, with Alfredo Morelos set to miss four games.

The Colombian hot-head was dismissed for the FIFTH time this season after slamming a left elbow into the face of Brown.

And the SFA have confirmed Celtic’s Swedish international right-back Mikael Lustig, who emerged from a fracas after the final whistle with his jersey torn to bits, and the Ibrox side’s reserve keeper Wes Foderingham had also been booked for their part in the rumpus.