Celtic Quick News on News Now
You are at:Home»Latest News»ICE ONE, RONNY: CALMAC’S DEBT TO EX-BOSS DEILA
By CQN Magazine on 28th May 2020 Latest News

The 26-year-old Celtic midfielder has become a mainstay in the Hoops first team and has already promised the Hoops fans he will be at Parkhead for 10 in a row.

McGregor, though, took time off to reflect on the start of the glory run and he expressed enormous gratitude to Deila for giving his breakthrough opportunity in the summer of 2014.

The Norwegian had just taken over from Lennon after quitting Stromsgodset when he handed a first-team debut to the youngster who had just returned from a five-month loan spell at Notts County.

McGregor was pitchforked straight into the first team for the Champions League qualifier against FK Reykjavik in Iceland and repaid the new gaffer with the only goal of the game.

The Scotland international anchorman, speaking to the Daily Record, said: “Ronny was the one who gave me my chance to go and perform in the first team.

“I will always be grateful to him for showing that faith in me.

“When he took over he could have gone in a safe  direction, but he liked to develop young players.

“He always wanted to give you a chance and you have to give him credit for that.

“Ronny was willing to throw in younger boys such as myself and Kieran Tierney and let us play. Without that, I might not be playing for Celtic today.

“It’s something I will always thank him for. I’m grateful to him for setting me on my journey.

“He set me on my way to becoming a Celtic first-team player when I was at a real crossroads in my career.

“Ronny helped me achieve a dream and I will always be thankful to him.” 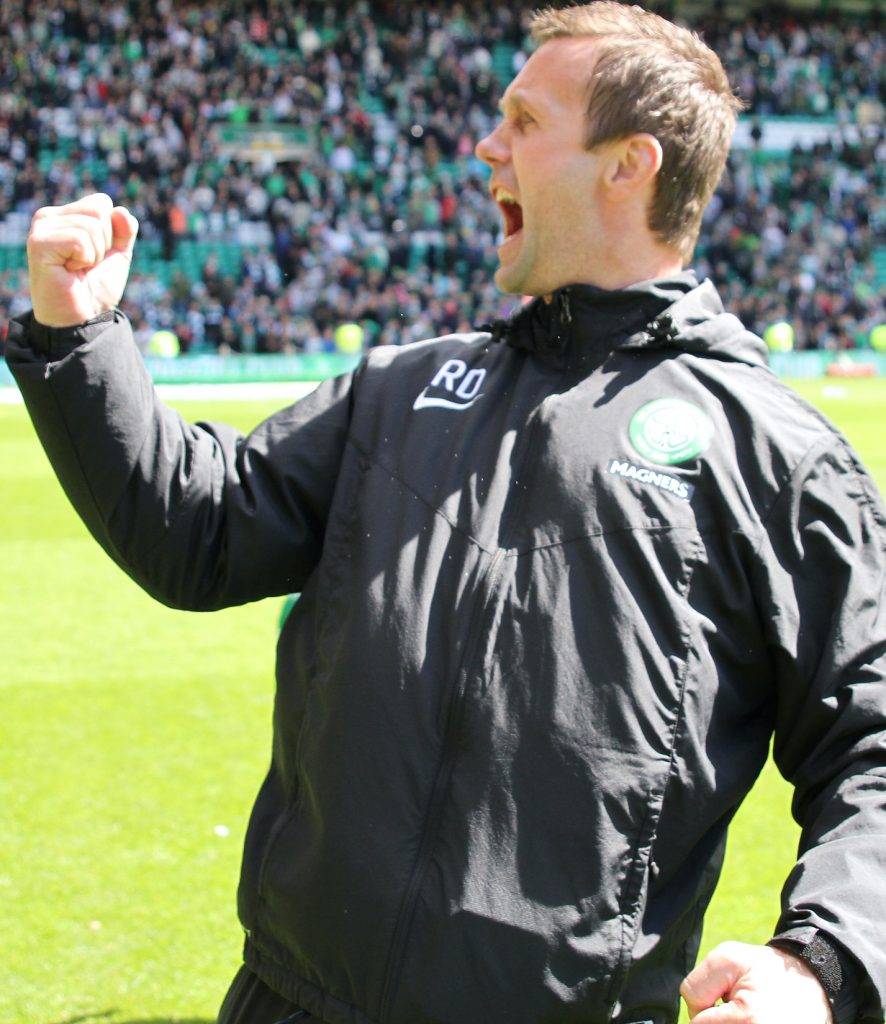 THE RONNY ROAR…boss Ronny Deila celebrates with the Celtic fans after winning the first of his two titles in season 2014/15.

McGregor has also worn the armband for his club in his role as vice-captain to Scott Brown and admitted it was important to take on extra responsibility following the exit of experienced players such as Mikael Lustig and Dedryck Boyata in the summer.

He added: “Some of the senior boys moved on and everyone was looking at Broony. He had lost a couple of older heads and people probably felt he needed a bit of a hand.

“Guys like Mika were senior figures in the dressing room and I looked up at them over the previous five years.

“There is also the vocal side of things and, with the more games you play and the more you achieve, you feel you are well respected in the dressing room. Younger boys will look at who is performing every week and is trying to set the standards.

“When I was breaking in, I would look at Broony and Mika and think: ‘That’s what I need to do to have a successful career’.

“I feel I have stepped into that role quite well over the last few years as I picked up more experience.

“I have always been driven to win since I was younger and when you start achieving a lot for Celtic you take on that extra responsibility in the dressing room.

“Senior boys need to set the right standards and markers for those coming through into the side. That’s what I’ve tried to do.”