NEIL LENNON insists Celtic should be declared champions if Scottish football doesn’t resume after today’s order for a lockdown.

The Hoops boss backs the decision to suspend the leagues, but believes the champions, 13 points ahead and requiring only five wins from eight games to clinch the title, should be handed the crown if the campaign is not completed.

All football has been shut down in the wake of the coronavirus pandemic with the Hoops’ game at Ibrox on Sunday postponed. A win for the visitors would have left them needing only three victories to lift the flag.

Asked if his side deserve to be crowned champions in the most extreme of circumstances, Lennon, speaking to the Daily Record, answered: “We’d be the champions and rightly so.

“We’re 13 points clear. And I think in most of the other leagues, like Dundee United, they’d have to be promoted, as well.

“We’re over 30 games into the season, they’re not going to take that away from us.”

The inrerruption may have temporarily halted the Parkhead side’s surge towards nine in a row with only two points dropped from a possible 30 in 2020, but the Irishman backed the joint decision of the SFA and SPFL.

He remarked: “I’m not a health expert, it’s come from people far more well qualified than me and the public health is the most important thing.

“If that decision’s been taken, then we back it. 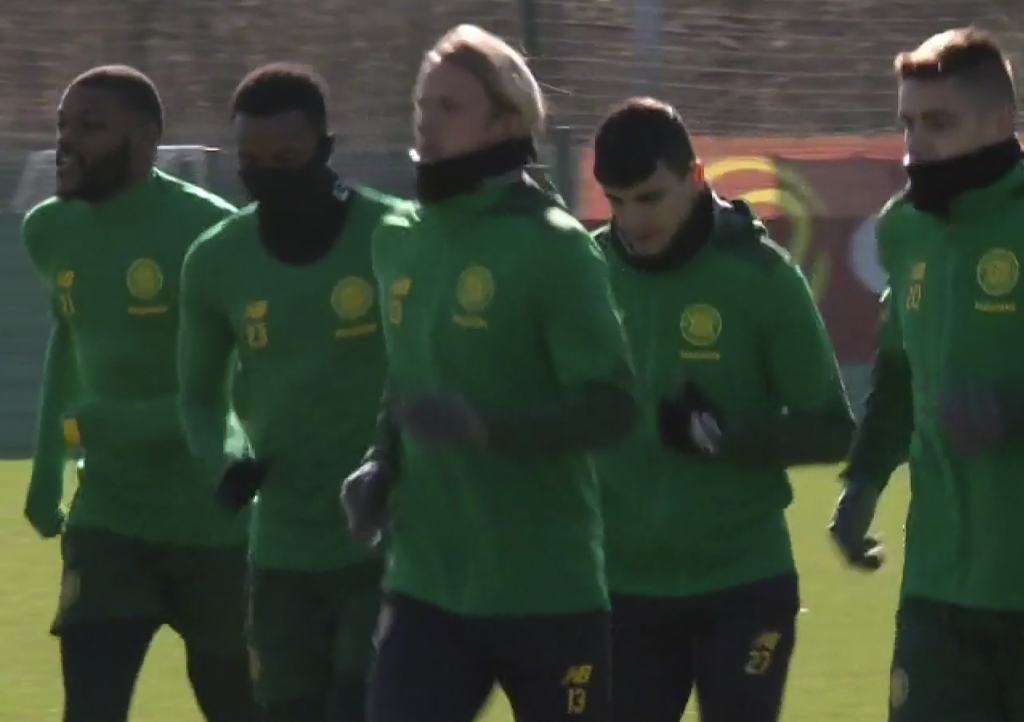 ON THE RUN…Celtic players, led by Moritz Bauer, preparing for Ibrox at Lennoxtown this morning.

“It’s been business as usual, we’ve been training today and then we heard that the game was cancelled.

“So, we’ll be giving the players a few days off until we can sit down, maybe on Monday, and see where we go from there.

“We’ll give them a couple of days off and then, hopefully, come Monday we’ll have a better idea of what’s ahead of us in the future.

“It’s unprecedented, I’ve never experienced anything like this in my career and I’m sure everyone’s in the same boat.

“But the gym is here for the players to use if they want. It has been business as usual, we were preparing for the game and looking forward to it, but we understand. We’re still bitterly disappointed.”

Lennon acknowledged it would be a lot more satisfactory for the Hoops to achieve the championship in the same manner as they have done the previous eight.

He added: “That would be the ideal scenario, but it could be death by a thousand cuts. From what I gather, this is going to get worse before it gets better, the spread of it.

“Playing in the summer? That would be okay, but then you’ve got Champions League qualifiers. It might be, what, a week later?

“It’s impossible. I think the Euros will get cancelled and put back a year so there may be a window where you can extend the league into the summer.

“But then when does the following season start? When do the Champions League qualifiers start? All those are unanswerables at the minute.”