Celtic Quick News on News Now
You are at:Home»Latest News»‘I’LL BEAT MYSELF UP’ GRIFFITHS
By CQN Magazine on 27th November 2015 Latest News

BLUNDERING Leigh Griffiths has accepted most of the blame for Celtic’s sad exit from Europe after last night’s 2-1 flop against Ajax at Parkhead.

The striker fluffed two excellent opportunities in the closing 15 minutes before substitute Vaclav Cerny scored on the counter-attack to give the Dutch aces all three points.

As his shot eluded Craig Gordon at his near post, any faint hopes the Hoops had of reaching the knock-out stages were dynamited into oblivion.

The final game against Fenerbahce in Turkey next month has now been rendered meaningless and Ronny Deila’s men are destined to finish rock bottom of Group A.

Griffiths also missed the target twice in the first-half after Arkadiusz Milik had cancelled out the third-minute opener from Callum McGregor.

He said: “This has been my toughest moment of 2015. I will be taking a lot of stick from fans, but that is part and parcel of football. 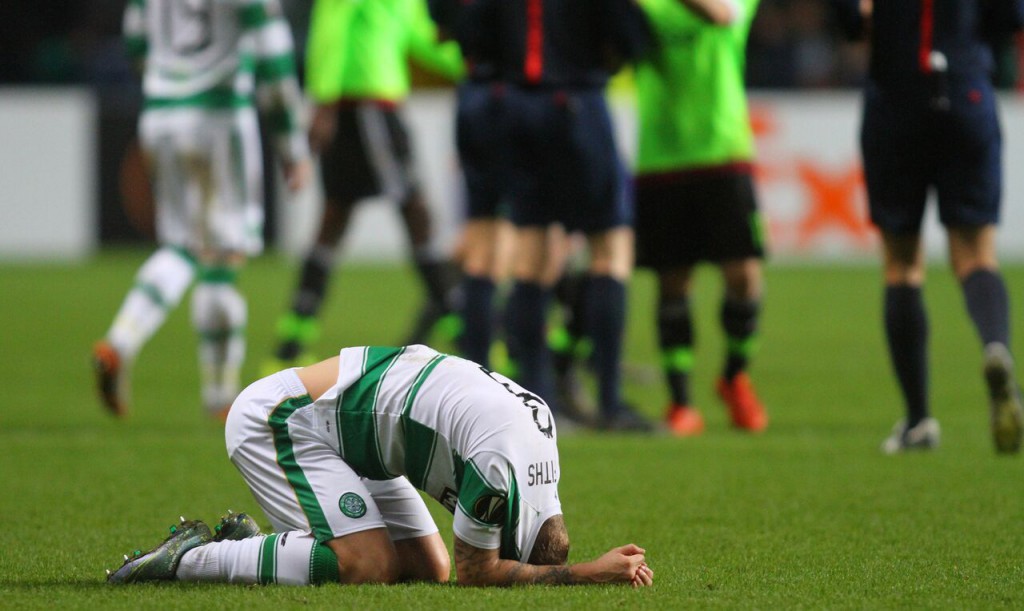 “We had the opportunity to go to Istanbul with a chance and the fate rested with me and my shooting boots. Unfortunately, for me, they were on the wrong feet.

“I will beat myself up until Sunday. Ultimately, my performance has cost the team in Europe. I’m putting that on myself because I can’t fault anyone else in the team. I thought they were outstanding.

“I will blame myself. If I take my chances, it could be a different scoreline. I had three, four, five good chances. On another day, I would have scored two or three of them, but this has cost us dearly.

“I couldn’t utter a word to my team-mates after the game. I was just so disappointed. It is not their fault. It is down to me and my finishing.

Griffiths admitted he would understand if Deila axed him from the starting line-up for Sunday’s league game against Inverness Caley Thistle.

He added: “If I was him, I would want to change it. It is down to him and what he thinks is good for the team.

“If he picks me, I will go out and give it everything.”

Leigh could do well to watch a video or two on the guys smiling on the cover of the book below, especially the player on the left. He scored a bucket-load for Celtic but was never selfish. It there was a pass on, he’d pass. A couple of squared balls last night Leigh and we’d have won.

You can order THE WINDS OF CHANGE direct from CQN here or click on the image below.