The 26-year-old Japanese international was the target of an outrageous and unacceptable attack which was shown on social media as Govan followers sang racist lyrics about the Hoops striker.

The insulting video was posted online and has attracted widespread criticism. Kyogo has responded by thanking his supporters for their welcoming reaction.

Celtic posted a statement in support and called for action to be taken against those involved. 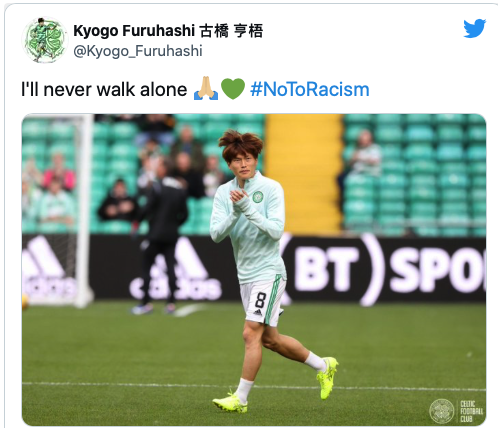 The £4.6million frontman who arrived from the J-League late last month has scored six goals in six starts for the Parkhead club to become an instant favourite with the club’s fans.

They have issued widespread backing for the player since the abuse was published online and the club also released a statement in support for him, as CQN highlighted earlier today.

Following UK-wide derision, the Ibrox club have been forced to react swiftly to identify the culprits and have indefinitely banned them from attending any of the Ibrox club’s matches.