ANDY ROBERTSON admits he is looking forward to battling with Kieran Tierney for the Scotland left-back spot.

The Liverpool defender is poised to play in the position against Costa Rica at Hmpden on Friday night while the Celtic ace is sidelined through injury.

Robertson, who began his career at Parkhead before being released to join Queen’s Park in 2012, is confident he will rise to the challenge if he has to go head to head with Tierney, who, at 20, is four years his junior.

He said: “KT has been brilliant. He had to adapt to playing right-back in the World Cup qualifying campaign, but against England we played five at the back and we worked down the left-hand side together.

“I thought it worked quite well. But that was under the old manager and now the new manager will have some new ideas and we’ll look forward to seeing what they are.

”We’re not quite sure how Alex McLeish will set up. There’s been a lot of talk but, ultimately, that’s up to him.

“I’m sure he’ll adapt to different games and different situations.

“But if we have to fight for one spot then I’m sure we’ll be both be up for it and whoever the manager picks we’ll have to respect that.

“If he is going to try to get both of us in the team then one of us will have to adapt, because we both can’t stand on each others’ toes, that’s for sure.” 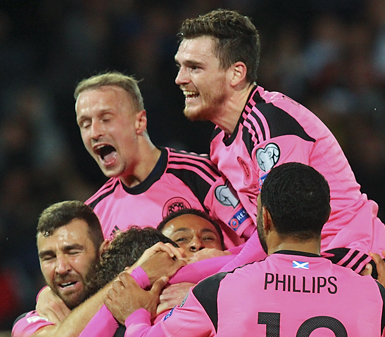 Robertson, who joined the Anfield outfit for £8million from Hull City in July 2017, also paid tribute to Hoops skipper Scott Brown who recently retired from the international scene.

He added: “Broony was a fantastic captain for a number of years and we were very lucky. He led by example and did a terrific job.

“So, I think whoever takes over will have big boots to fill.”