KIERAN TIERNEY has swept aside reports linking him with a £25million move to Everton and insisted: “It’s always been Celtic for me.”

The Scotland international left-back has once again underlined he is 100 per cent committed to his boyhood idols and is in no rush to quit the champions.

Tierney, who was introduced to the top side by Ronny Deila against Dundee in April 2015, admitted he has no regrets over passing up the opportunity of £70,000 -per-week wages at Goodison and said: “I know, and my family know, that since day one we have been committed to Celtic.

“That’s 100 per cent. In football, you never what might happen next, but I have never been anything else than focused at Celtic. It’s always been Celtic for me.

“I’ll never be in a hurry to leave this club. No matter what the situation is. But I can’t predict what will happen in the future.

IN WITH A SHOUT…Kieran Tierney displays his “100 per cent commitment”.

“There was obviously a lot of talk at the start of the transfer window during pre-season, more than before, but for me it’s just about switching off and focusing on Celtic.

“When I got away from training, I would focus on day-to-day life and try not to think about anything else and get distracted.”

Tierney, 21, said: “I’m still here, playing for this great club, giving everything every day at training.

“At the start of pre-season, people were coming up and asking me what was going to happen. It has died down.

“Nobody is talking about it so much now, but if a supporter asks me, it doesn’t bother me.

“I’ll tell them the truth. I’m 100-per-cent committed to Celtic. That’s how it stands.”

The full-back, who was born in Douglas on the Isle of Man and brought up in Wishaw, was rewarded with a bumper pay rise and a six-year contract after impressing Brendan Rodgers. 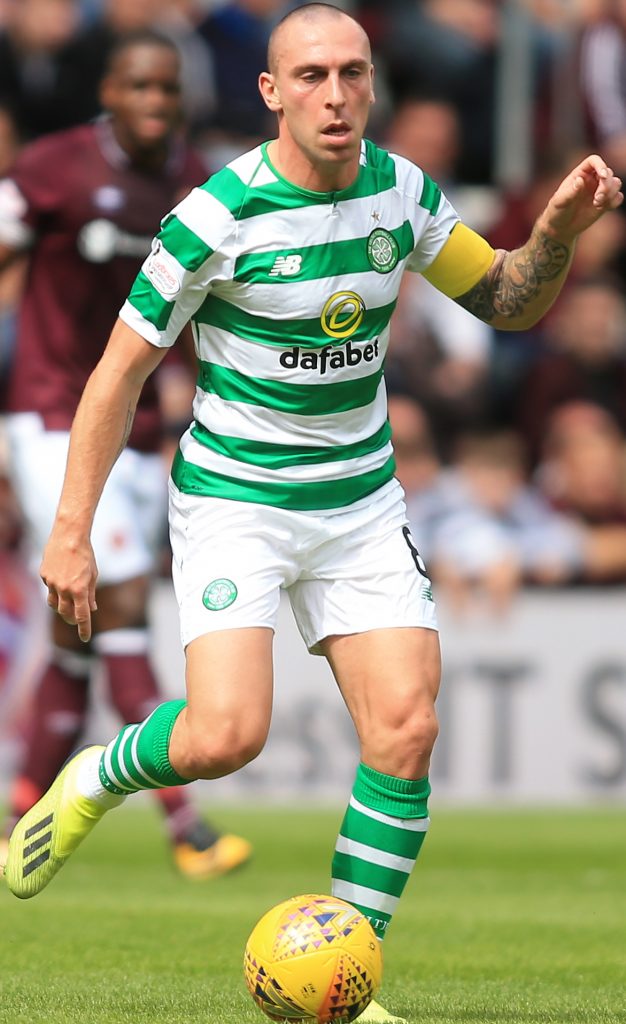 Speaking of the salaries up for grabs across the border, KT remarked: “It’s crazy, isn’t it? Absolutely crazy.

“The money being spoken about and what you can earn in England is life-changing.

“However, the money I am on, for someone my age, is more than I ever thought I’d earn.

“My life has changed because of Celtic. I have them to thank for everything.

“I have given them everything, really all my life and it’s paid off so far.. I have enjoyed it.

“I still live at home and I’m not planning to move out for a while. I can’t make a cup of tea. I can’t make my bed. But it’s important to switch off from all the talk.”

KT had the last word: “‘Working under a captain like Scott Brown is amazing. I learn from him every day. He’s my hero.”