BRENDAN RODGERS is in no mood to hang around when it comes to clinching Celtic’s seventh successive title.

The Hoops can seal the championship against Neil Lennon’s Hibs at Easter Road tomorrow.

However, there are some fans who would prefer to delay the flag-waving party until a week on Sunday when struggling Sevco Rangers play at Parkhead.

But Rodgers, who has yet to sample defeat against the Ibrox outfit in 10 outings and who masterminded last week’s 4-0 Scottish Cup semi-final thrashing, said: “I am a Celtic fan, but I don’t want to wait. I want to win it tomorrow.

“If we can do it, great. It will be a tough game for us, probably the most difficult place we could go to win the title, but if it doesn’t happen it is okay.

“We go to the next game and, if not, the next game. The most important thing is to win and we want to do it as soon as we can.”

The Govan side have gone into meltdown after their Hampden horror show that saw Kenny Miller and Lee Wallace suspended following a dressing room bust-up, Andy Halliday and Daniel Candeias throw strops when they were substituted and Ross McCrorie red-carded as he hauled down Moussa Dembele for the French ace’s cheeky penalty-kick effort for the third goal. 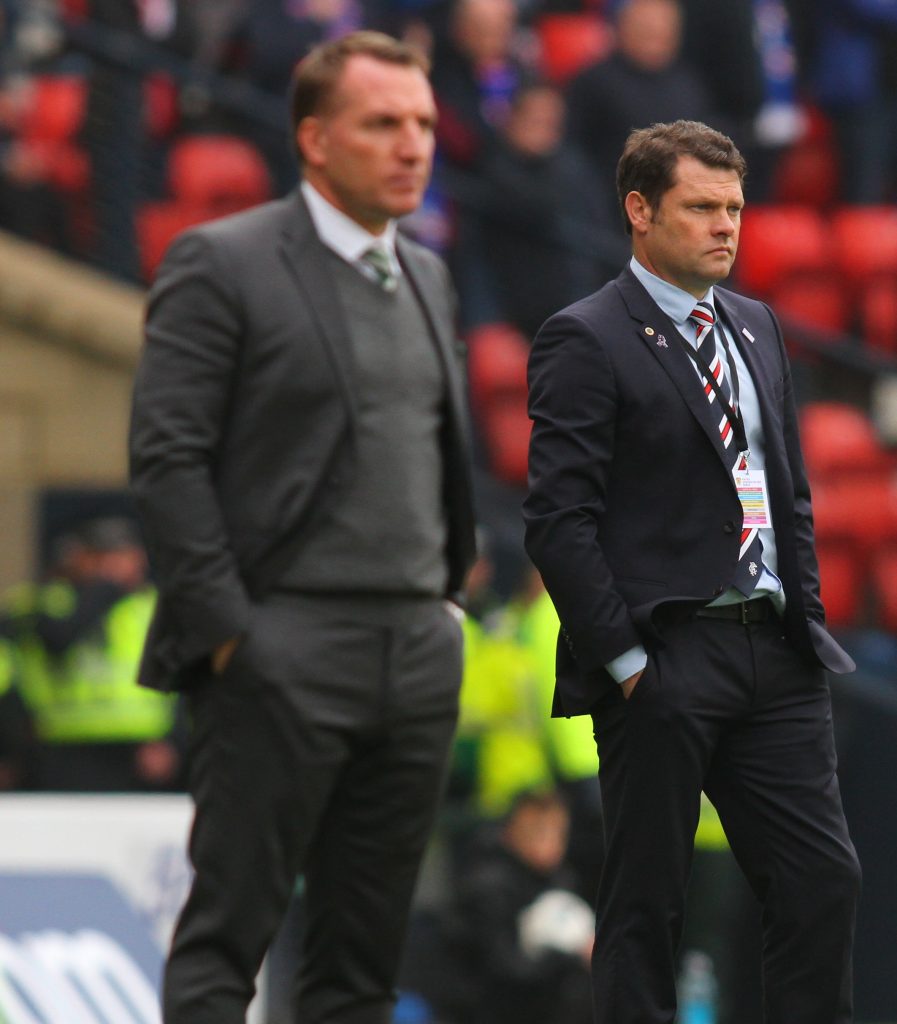 Pressure is mounting on caretaker boss Graeme Murty and there is the possibility of the Ibrox outfit failing to cement a place in next season’s Europa League.

Rodgers said: “Listen, that is the game, isn’t it? If you lose a semi-final it’s tough. The focus is to win the semi-final and, hopefully, win the trophy. If you lose and lose to one of your great rivals, it’s difficult. Everyone knows what the fall-out from these type of games can be.

“But we coped with it. You can enjoy it, but you always have to retain your humility, look at it and see what you could have done better. Then the show goes on and you make sure you’re ready for the next game.”

Reflecting on the Hoops third four-goal winning margin against the Ibrox team in two seasons, Rodgers added: “There have been other games with greater scorelines, but under the professional pressure of the game and everything that was on it, what pleased me really was the performance.

“After playing at Hampden seven times and winning seven times, you see the calmness and the edge players are playing with – but also the control.

“That intent, real ferocious intent, in our defending and our pressing. It was something we talked about before the game.

“To stop the long ball, you have to counter-press the game hard so there were very few opportunities for that for Rangers.

“So, tactically, I was really pleased with the players in the semi-final.

“To play under that pressure with that calmness, again it was another problem that the players solved. Coping in that situation was really pleasing.”