Celtic Quick News on News Now
You are at:Home»Latest News»‘I’M A CELTIC FAN, SO IT’S A DREAM,’ RALSTON
By CQN Magazine on 12th May 2022 Latest News

ANTHONY RALSTON scored Celtic’s first goal of the 2021/22 Premiership campaign – and it passed without a murmur.

Last night, the rejuvenated right-back sent over a delicate cross for Giorgos Giakoumakis to hammer in a close-range header and the Hoops fans partied well into the net.

Admittedly, there were 35 games sandwiched in between both moments that saw the fortunes of the Parkhead club take an astonishing upswing. 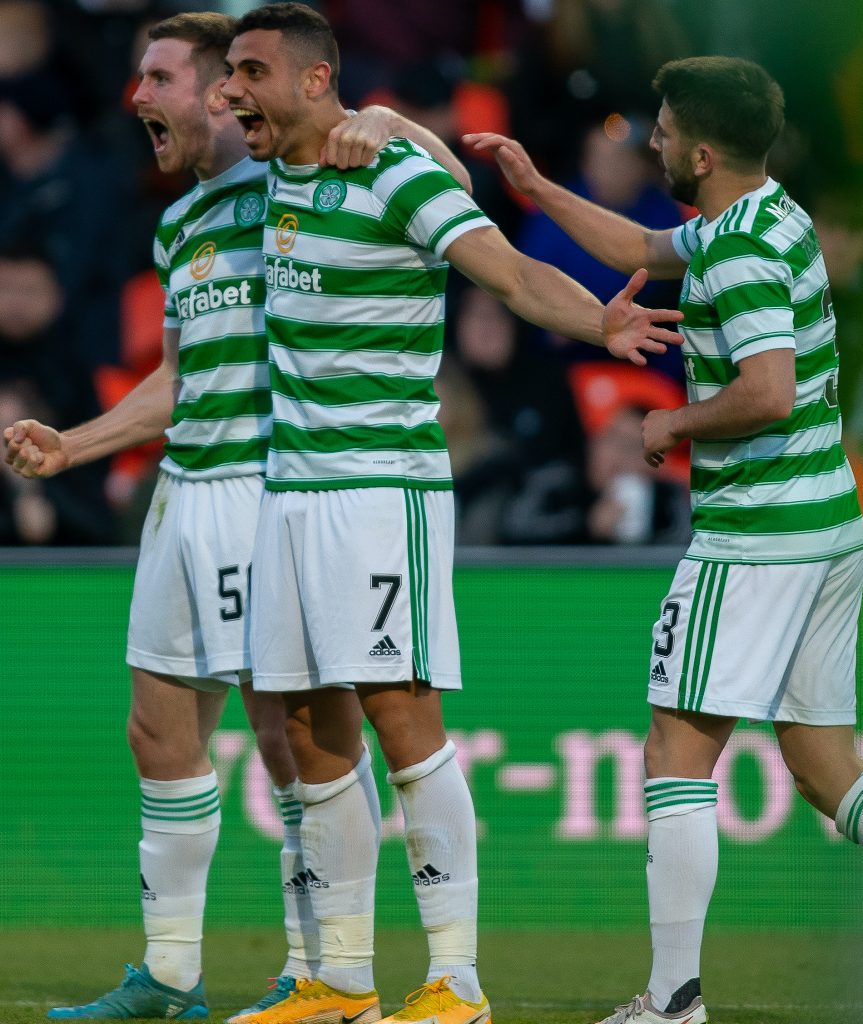 ROARING SUCCESS…Anthony Ralston and Giorgos Giakoumakis yell in delight after the Greek striker’s goal as Greg Taylor prepares to join the celebration.

Ralston’s early-season effort came in the second-half against Hearts at Tynecastle on July 31 and cancelled out ex-Celt Gary Mackay-Steven’s early opener. The defender’s strike looked like giving Ange Postecoglou a point in his first-ever league game since his arrival in Scotland te previous month.

However, the visiting back lot failed to deal with a swirling left-wing free-kick and John Souttar was allowed to rise unchallenged to send a header past Scott Bain for a last-gasp winner.

Ralston’s excellent solo goal was forgotten amid the sob stories that the team could be about to embark upon another embarrassing season after the previous campaign had ended in abject disappointment and misery.

But the full-back, who looked to be heading for the Parkhead exit until the new manager triggered an extension on his contract, and his team-mates had other ideas and that was emphasised with his headed winner deep in stoppage time against Ross County in Dingwall on December 15 when a 10-man team, with Carl Starfelt red-carded, refused to accept second best. 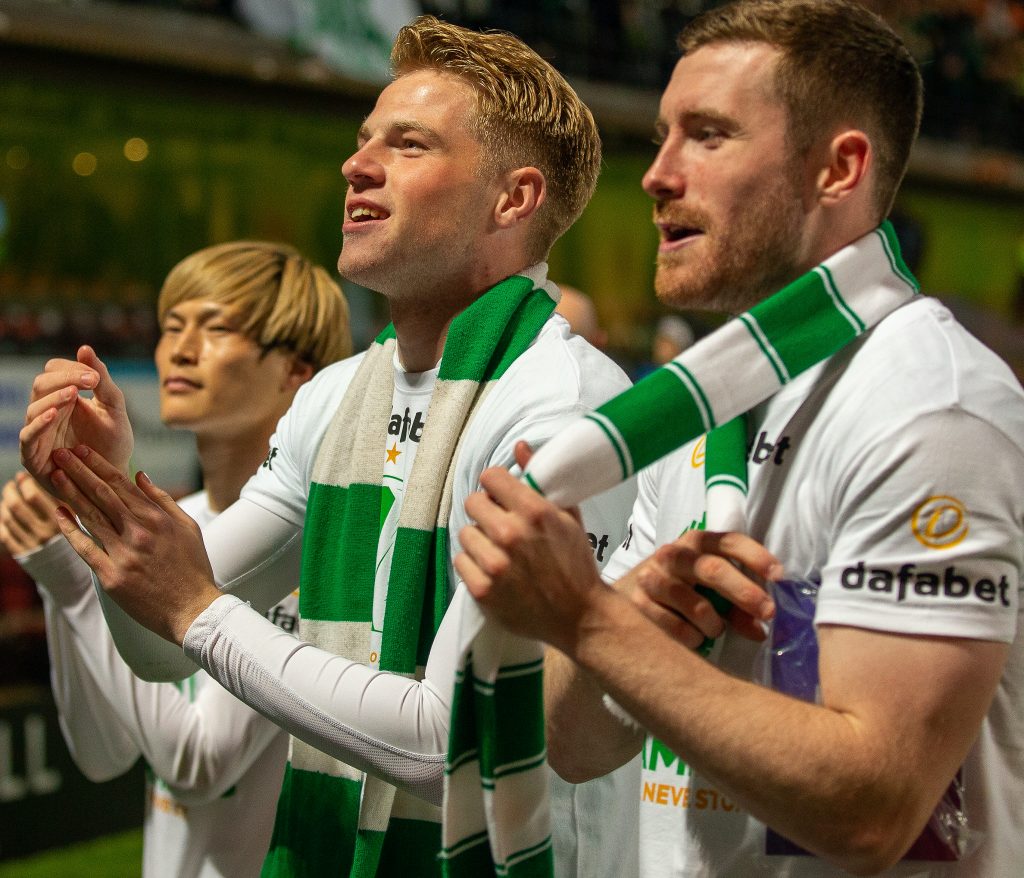 And that was the story on Tayside last night when Ralston stormed forward after a sequence of clever passing on the right to flight in a perfect ball for Giakoumakis who did the rest with an unstoppable header from four yards.

Dylan Levitt equalised with a memorable long-range effort to make it 1-1 at the end, but one point was enough for the Hoops to deliver their tenth title in 11 years.

At the conclusion of a frantic confrontation against stubborn opponents, Ralston admitted: “It’s a bit overwhelming, but I’m absolutely delighted. All the boys deserve it, the staff deserve it and we’ve all worked so hard over the course of the season.

“It’s a very proud moment for myself personally to be here and have played a part. Obviously, I’m a Celtic fan, so it’s a dream.

“If I was to imagine at the start of the season how it would pan out for myself this probably wouldn’t have been how I thought it.

“I’ve got a good family and friends behind me who helped me through the hard times last season and helped me get to where I am now. So I’m delighted and I owe it to them, as well. 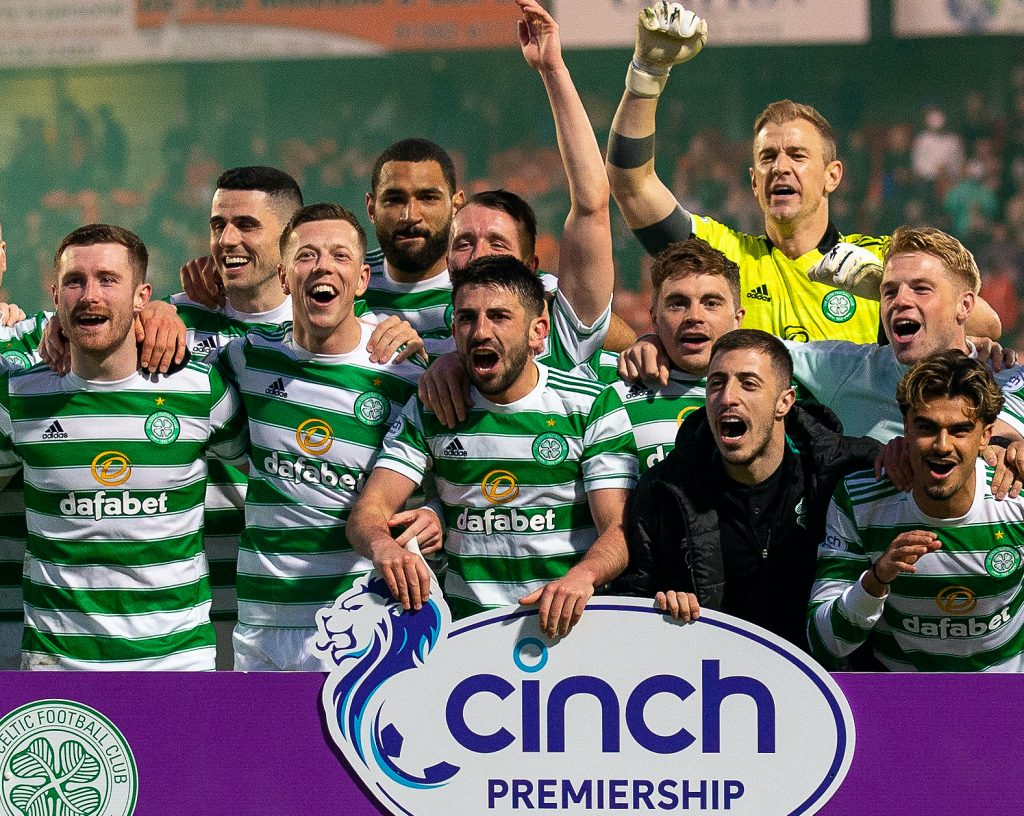 “To be standing here on a personal more is a proud moment for me to achieve this when I’ve got my father and my little girl.

“So, I’m delighted, but above all else for the team – they deserve it, they’ve worked so hard, each to a man, the boys have come in from different places and cultures and adapted so well and all contributed to where we are now.”

Ralston, speaking to Celtic TV, added: “It’s through hard work very day, it’s every day we are on the training ground, we’re putting in really hard work in terms of training and we’ve taken that into the games.

“We’ve really bought into how the gaffer’s wanted us to play and that’s why we are where we are today.

“We’ve shown that we’re a top-quality side this season and we’re in European football at the highest level next season – we’ll take that head on the same as we’ve done with everything else so far.”