NEIL LENNON has hailed his Celtic players as he prepares for yet another assault on history in the new season.

The Hoops boss is determined to maintain his team’s domination of the domestic scene – and everyone is gearing up for the historic tilt at ten.

Lennon returned to Parkhead in February last year following the sudden exit of Brendan Rodgers to Leicester City and earned praise for keeping the club on course for an unprecedented treble treble.

He added a ninth successive crown and the Betfred League Cup last time out and an extraordinary quadruple treble was on the horizon with a Scottish Cup semi-final against Aberdeen due on Easter Sunday before football went into cold storage in mid-March due to the coronavirus outbreak.

The champions have returned to open-air training at Lennoxtown and the Irishman has admitted his satisfaction of his playing staff as they get ready for the rigours of a new campaign.

Lennon, speaking to Celtic TV, said: “We’ve had the players back for just over a week and that’s caused a lot of anticipation and excitement. It was great to see them all back.

“It’s brilliant to be back here at Celtic Park. The pitch looks beautiful and we’re just all ready to go.

“The players will probably need another couple of weeks preparation, but they’ve come back in really good condition. I’m delighted. They’ve done some really good work and they’ve obviously kept themselves in good nick during the pandemic. They are just itching to get back to it now.” 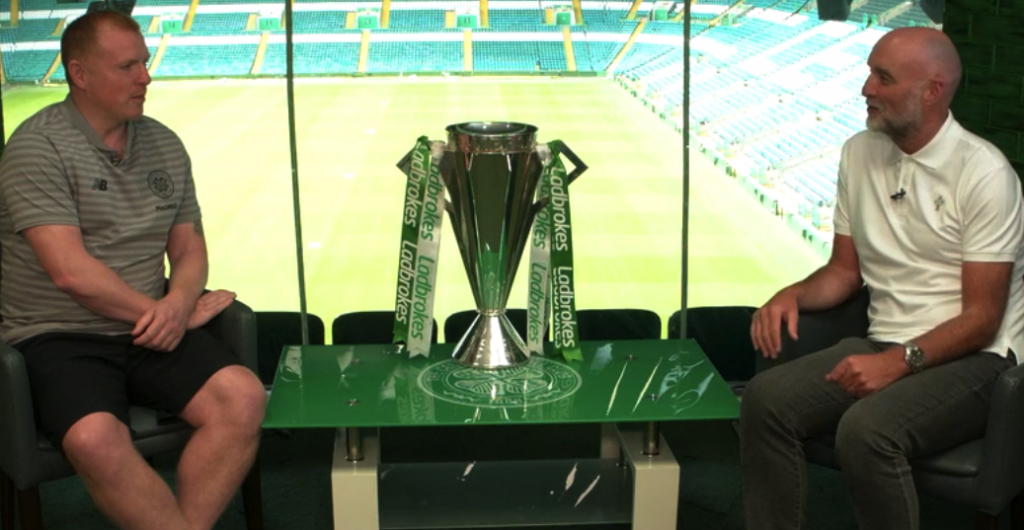 The gaffer continued: “How football in Scotland manifests itself as we come back, we don’t know, but we’re doing everything we can as a club to be purposeful and be positive about getting it started as best we can.

“Some players thrive on big atmospheres and they look forward to the games and having the fans is such a huge ingredient for a successful team – and no more than Celtic because we’re synonymous with having a fantastic support.

“They’ll be missed, but, hopefully, it will be a short-term fix and we can get the punters back in sooner rather than later. To be fair to the club, behind the scenes they’re doing everything they possibly can to make that happen.”

Lennon also applauded the fans and added: “I think they’re magnificent and I’m very grateful for their support, putting their hands in their pocket at such a difficult time.

“Being a Celtic fan, it’s an identity, it means so much to the individual and families, as well, and no more than this year with what lies ahead.

“It’s going to be very exciting and we guarantee that we will do  everything we can to bring more success to the club.”