EFE AMBROSE has dismissed reports linking him with a move to Greek champions Olympiakos.

And the Nigerian defender, who played the entire 90 minutes of the 1-1 draw against Astana in Kazakhstan, admitted he is perfectly happy at Celtic. 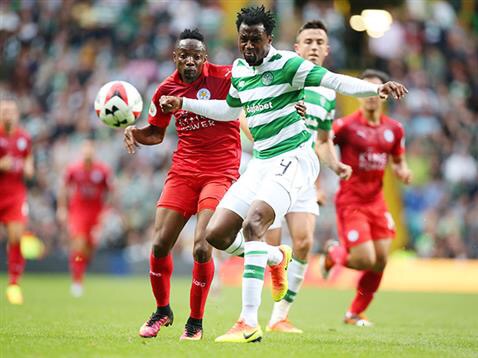 Ambrose, 27, revealed he is aware of the people who are spreading stories about his imminent departure from Parkhead.

The centre-half, who still has a year of his current contract to run, said: “I know those who are behind the rumours, but I won’t mention them – at least for now.

“I am not aware of any talks regarding a move away from Celtic. It’s the same people who were behind the Bayern Leverkusen interest who are involved in this Olympiakos story.

“The perpetrators of the Bayern Leverkusen interest went as far as saying I told close friends that Leverkusen want me.

“Meanwhile, I was alone training with the youth teams of Celtic while the first team was away for pre-season Slovenia and Austria.”

Ambrose added: “I have said before that am ready to fight for my spot in the team and nothing has changed,

“It will also impress you to know that just as am reading about Olympiakos interest in me, I also heard in January the same story.

“However, I am fully settled and happy at Celtic.”

The experienced international has had a rollercoaster four years at the SPFL champions since Neil Lennon paid £1million to bring him from Israeli outfit FC Ashdod.