DAMIEN DUFF’S promotion to Celtic first team coach has been meteoric as he became an integral part of the new-look Hoops management team.

Brendan Rodgers led an exodus with him of his backroom staff that included his assistant Chris Davies and former centre-half Kolo Toure when he quit for Leicester City on Tuesday.

The champions had to very swiftly assemble another team to see out a crucial season with an eighth successive title on the horizon and a Scottish Cup to be won to complete the historic treble treble.

Former gaffer Neil Lennon answered the SOS to take charge on an interim basis until the end of the campaign and John Kennedy was immediately promoted to assistant manager while former Republic of Ireland international star Duff moved up from his recent appointment with the reserves.

Duff has admitted he understand what is required in the vital months ahead with 10 Premiership games to play and the possibility of three Scottish Cup-tie to face, starting tomorrow night at Easter Road against Hibs in the quarter-final.

The Irishman got off to the best possible start in his new role with the champions securing three points to maintain an eight-point advantage at the top of the table following a thrilling and dramatic midweek stoppage-time 2-1 triumph over Hearts at Tynecastle. 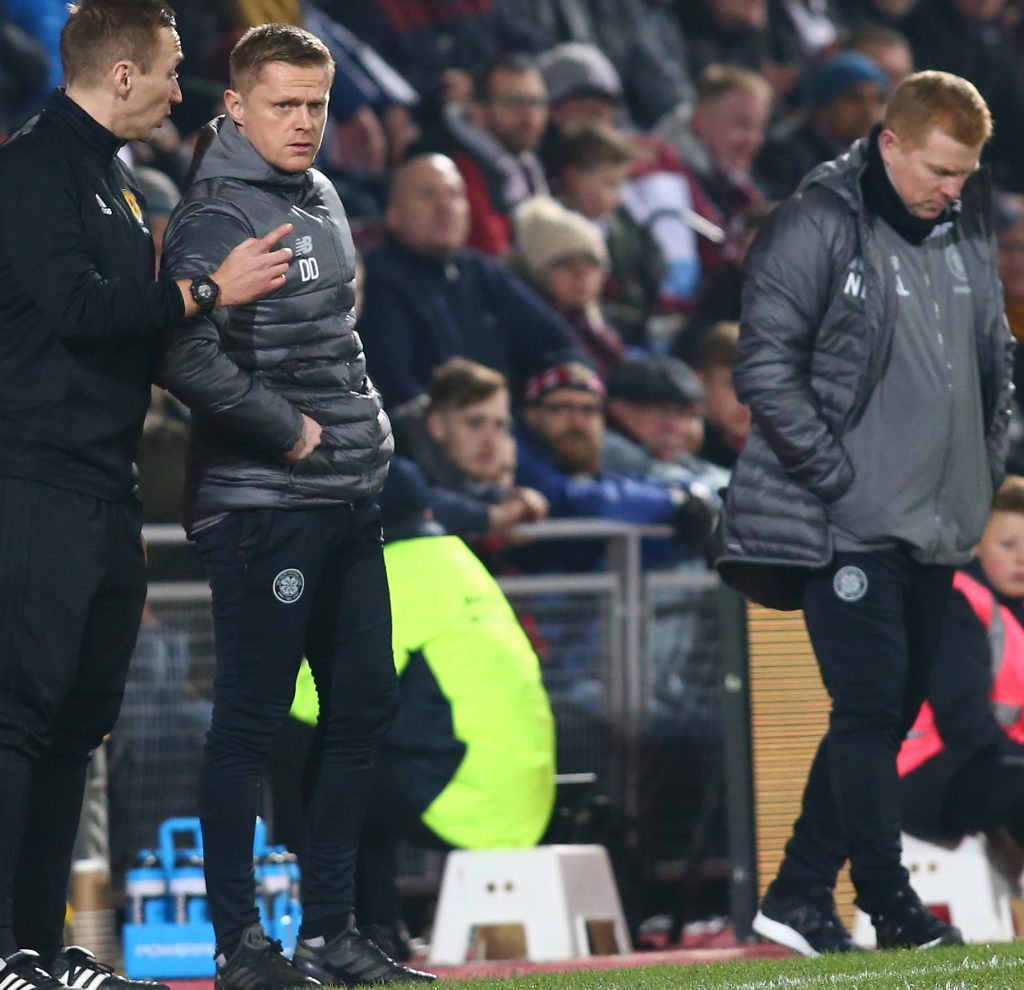 TOUCHLINE TALK-IN…Damien Duff chats to the fourth official while Neil Lennon patrols the touchline during the 2-1 midweek win over Hearts at Tynecastle.

Duff, 39, speaking to Celtic TV, said: “I’m ready for it. I know the role, I know the club and it’s a massive honour.

“I know what the club means to fans. It means the same to me, so I’m ready.

“I understand the club and, Celtic Football Club aside, myself and football, I’m all about emotion and enthusiasm.

“I felt like they were starting to really understand me and the way I work.

“The game against the Kilmarnock reserves is the best they’ve been and for 70-80 minutes they were brilliant.

“‘What I’ve enjoyed up until now is improving young players. I feel I’m good at it, so I guess I’ll miss that side of it, but I’ll still be keeping an eye on them and helping them whenever I can.

“There were four or five of them training with the first team after the Hearts game.

“That’s what the club’s built on, bringing youth through so nothing’s going to change.

‘”t’s obviously a massive step up to the first team. There will be more quality and a quicker tempo, but I’ll just be helping the gaffer and John wherever I can. That’s what I’m here for.”