TIMOTHY WEAH has hinted strongly he could remain at Celtic for a second loan season.

The 19-year-old American international is due to return to Paris Saint-Germain at the end of the campaign when his temporary transfer expires.

However, Weah, who scored his fourth goal for the champions in the 2-0 victory over St Mirren in Paisley on Wednesday, admitted he was loving life at Parkhead.

The charismatic forward, speaking to Celtic TV, said: “It was an amazing feeling to get that celebration in and was great to see Ryan Christie back on the field and also scoring another goal.

“I’m really happy for the team when I’m on the field, but even when I’m off, I’m really positive about it. I just try to keep my head up and go into training and train hard. 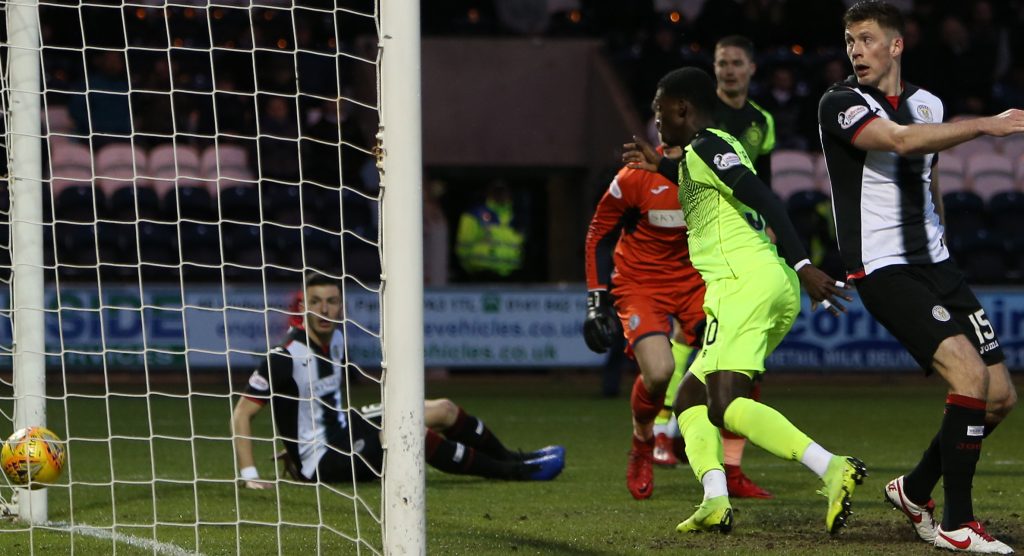 GOAL-DEN BHOY…Timothy Weah gets the opener against St Mirren in midweek.

“Whenever I get game-time, I try and give what I can give to the team, that’s the most important thing as we are a team. So far it’s been great and I’m really happy here. The guys have been amazing and it’s been a great experience.
“Obviously, because I wasn’t getting game-time where I was, being here at Celtic and getting the experience has been awesome.

“I love it here. I love the supporters, I love my team-mates and it’s been a great experience so far.”

Weah was also full of praise for skipper Scott Brown and insisted the 33-year-old midfielder was such an influential figure both on and off the field.

He remarked: “Scott Brown is amazing. Ever since I’ve been here, he’s been a role model for me. Just knowing that people said he was finished, he’s showing the world he still has it in him and it’s great.

“He shows me never give up and to keep going and he’s doing an amazing job. He’s a leader of men and he’s one of the best captains I’ve had.

The champions are now in a position where they can lift their EIGHTH successive crown if results go their way at the weekend.

If the Hoops beat Livingston at Parkhead tomorrow afternoon and Steven Gerrard’s Ibrox side lose against Motherwell at Fir Park 24 hours later the Premiership trophy while remain at Paradise with five league games still to play.

Weah is looking forward to the prospect of winning silverware for the first time in his career.

He added: “As a player, you always hope you get more opportunities, but whatever I get, I’m happy with it.

“My main goal is to help the club and to help my team-mates win games. I want to help the team whichever way I can, whether that be coming off the bench or starting.

“I just try to keep a positive mind about it and continue working hard and I know God will come through with me.

“Whenever I get opportunities, I try to seize them and I think that’s important when you’re young, learning, maturing and that’s what I’ve been doing. It’s been a great experience and I’m happy with how it’s gone so far.

“We also have to go the semi-final really focused because we have a good team to play in Aberdeen. It’ll be my first time playing at Hampden, so it’ll be an amazing experience and, hopefully, we can come through that and get a win for the supporters.”