CRACKSHOT Callum McGregor has explained why he is now scoring so many goals with his so-called weaker right foot.

The Celtic midfielder, who cracked in an exquisite half-volley to open the scoring in the 2-0 Scottish Cup Final win over Motherwell, revealed the thinking behind the textbook finish.

“It’s just reactions. It happened so quickly and when I hit it, I knew it was going in.”

McGregor has enjoyed an exceptional season which as seen him make his Scotland international breakthrough as well as claim big goals against Bayern Munich, Zenit St Petersburg and  Sevco Rangers, among others.

Like a host of team-mates, the playmaker has pledged his immediate future to the Hoops, in his case a further three years. 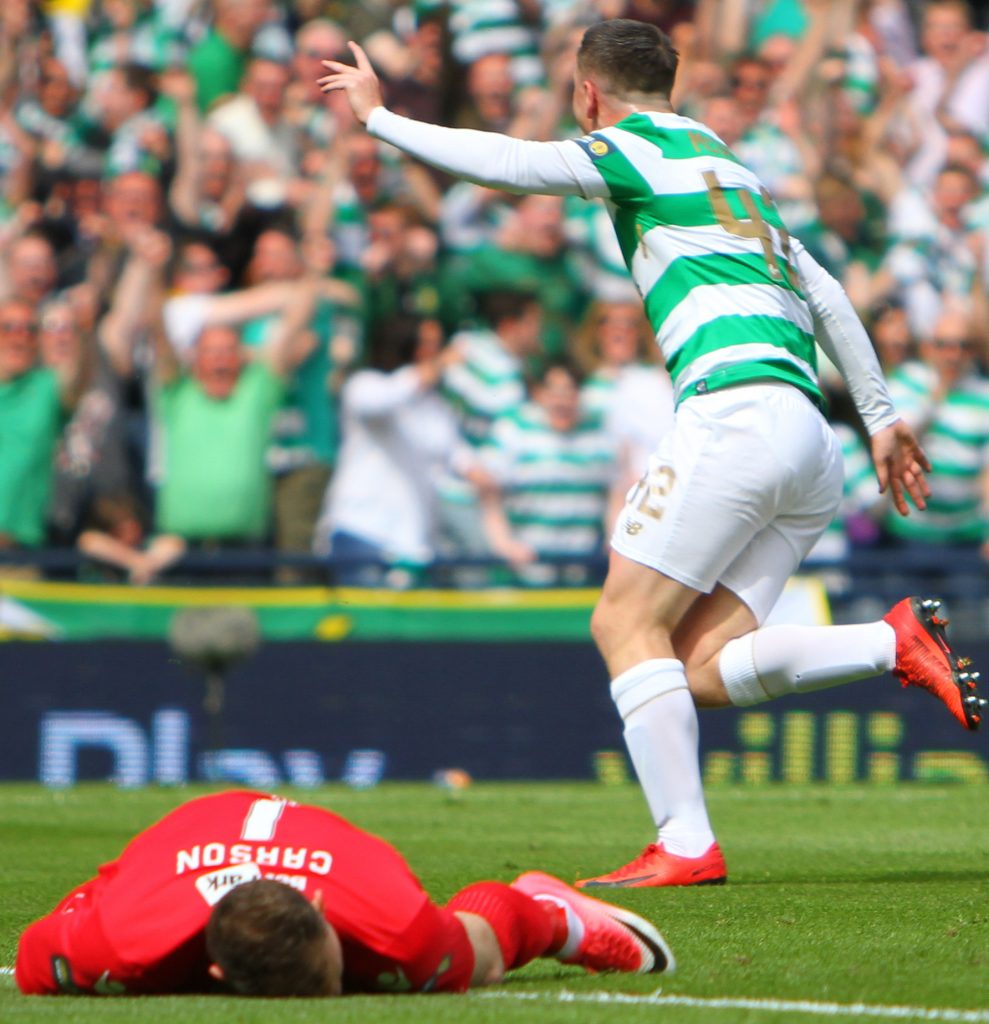 BY THE RIGHT…Callum McGregor turns away after slamming the opening goal past Motherwell keeper Trevor Carson in the Scottish Cup Final triumph. Pic: Geo.

He said: “It’s just the challenge of playing in big games. You see over the years, the great goals and the great players and you see the scenes they create among the supporters and the memories that it gives them.

“You think: ‘I want a bit of that. I want to be the guy who scores the goal that wins the game’.

“The more and more you do it, it becomes a bit more natural. You feel as though you can be the one who is going to make the difference.

“I probably don’t get nervous before big games. It’s more that excitement for the game – the way you feel with butterflies in your tummy wanting to go out and give a good performance and help the team to win.”

Reflecting on the Hampden triumph that clinched the unprecedented double treble, McGrgor added: “To be a part of a special day in the club’s history is hard to put into words and it’s difficult to sum up just how I am feeling.

“With the number of games I played and the amount of starts I made through the season, I felt as though I contributed more this time.
“There were goals in big games, as well. Obviously, it was great last year and I hope I played a part, but probably becoming more of a main player is something that I wanted to do.
“It was great to hear the manager give me credit and the way you want to repay him is by giving him trophies and playing well. It also creates good memories, as well.”