Celtic Quick News on News Now
You are at:Home»Latest News»IMAGE THAT SHOWS HOW DESPERATE ENGLISH ARE TO NICK EDOUARD
By CQN Magazine on 2nd May 2020 Latest News

THE qualities of Odsonne Edouard have attracted admiring glances throughout Europe.

And there is no doubt Sky Sports would love to see Celtic’s French striker flourish in the English top flight.

There appears to be a story every day from the satellite giants linking the Hoops star with a big-money switch to the so-called Promised Land.

Their main focus appears to be to get the champions’ talisman, with 28 goals before the season went into cold storage due to the coronavirus pandemic in mid-March, a move to Arsenal, as CQN reported during the week.

They have already thrown Brendan Rodgers’ Leicester City and Newcastle into the mix, but an image on their website now seems to underline their desire to see the 22-year-old fans’ favourite at the London club. The photoshopped snap shows Edouard wearing two halves of a Celtic and Arsenal shirt. 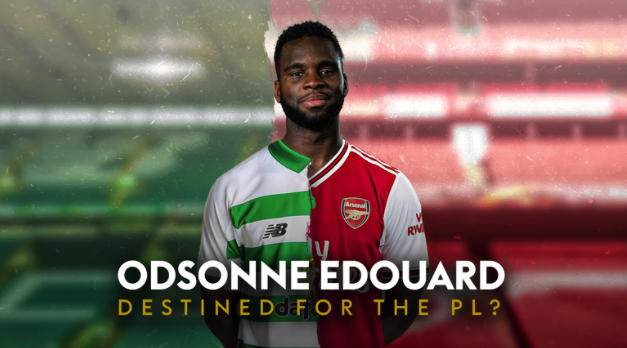 CQN can remind the broadcasters the flamboyant frontman, who cost a club record £9million when he arrived from Paris Saint-Germain in June 2018, still has two years of his contract to run at the eight-in-a-row title kings.

However, by all accounts, new Gunners gaffer Mikel Arteta has been told he will be operating with a severely restricted transfer budget and it appears his priority target is Chelsea’s attacking midfielder Willian who is poised to quit Stamford Bridge at the end of his contract next month.

The Brazilian international, who will be 32 in August, is demanding a three-year deal which will be worth a basic £18.72million.

Willian is holding out for a whopping £120,000 per week and the Emirates outfit are now pondering if the switch is financially feasible.

In the meantime, Edouard will continue to focus on all things Celtic to be prepared when – or if – football restarts.