Celtic Quick News on News Now
You are at:Home»In Pictures»IN PICTURES: BRENDAN RODGERS, THE MAN FOR ALL SEASONS
By CQN Magazine on 2nd December 2018 In Pictures

BRENDAN RODGERS walked into Parkhead on May 23, 2016 to be announced as the new Celtic manager.

He was welcomed by thousands of cheering Hoops fans – but no-one could have envisaged the remarkable impact the selft-confessed Celtic fan would have on the club.

Rodgers has led the team to back-to-back trebles and he has the opportunity this afternoon to pick up his SEVENTH successive piece of silverware when the Bhoys take on Aberdeen in the Betfred League Cup Final at Hampden.

That would be the first step towards an amazing treble treble. Who would bet against it?

CQN‘s snapper supreme Geo has followed the Irishman’s progress from day one. Here is the pick of the pics. 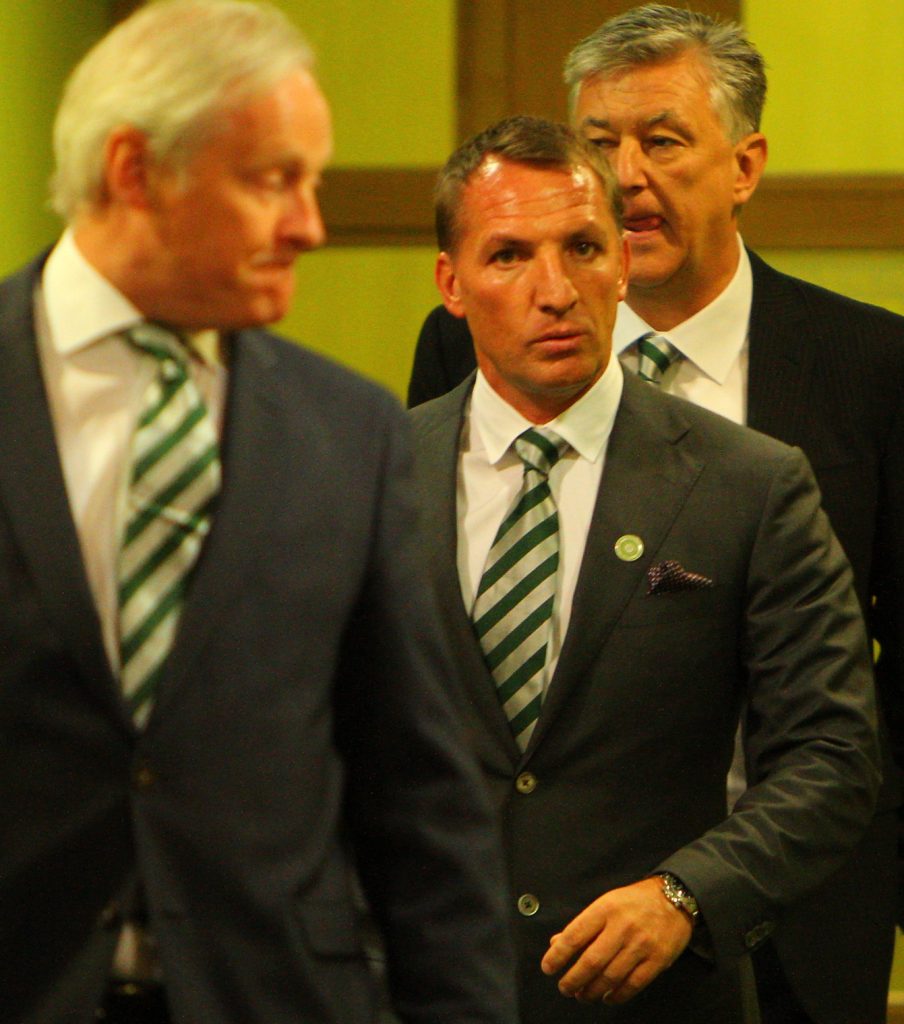 WELCOME TO PARADISE…Brendan Rodgers is ushered in by chairman Ian Bankier and chief executive Peter Lawwell. 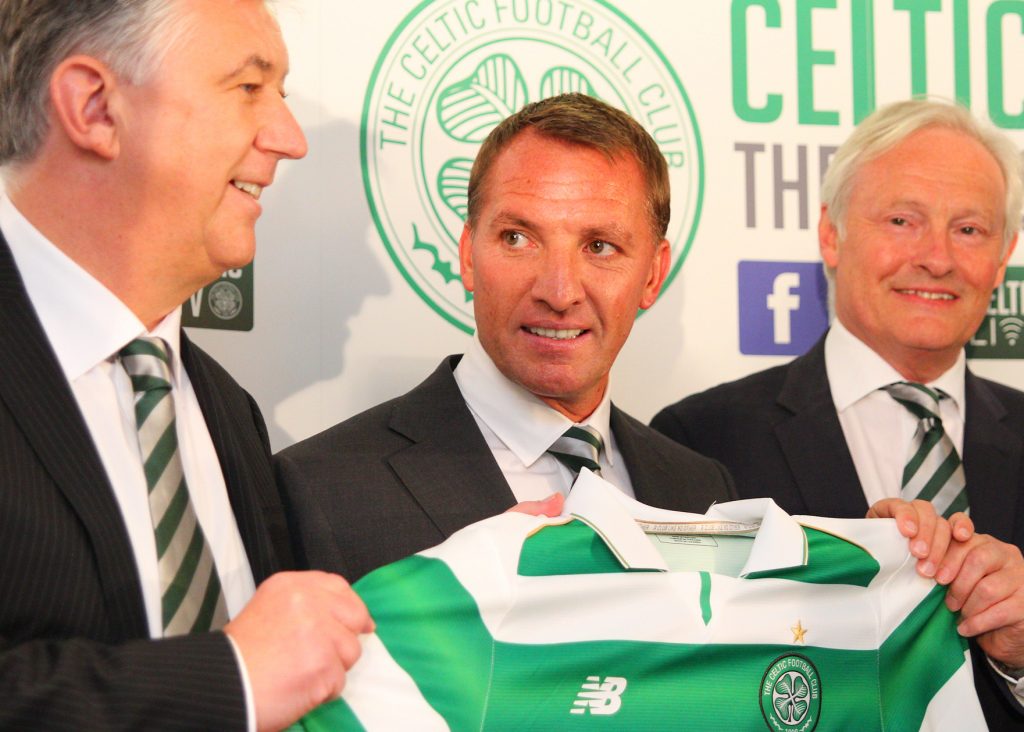 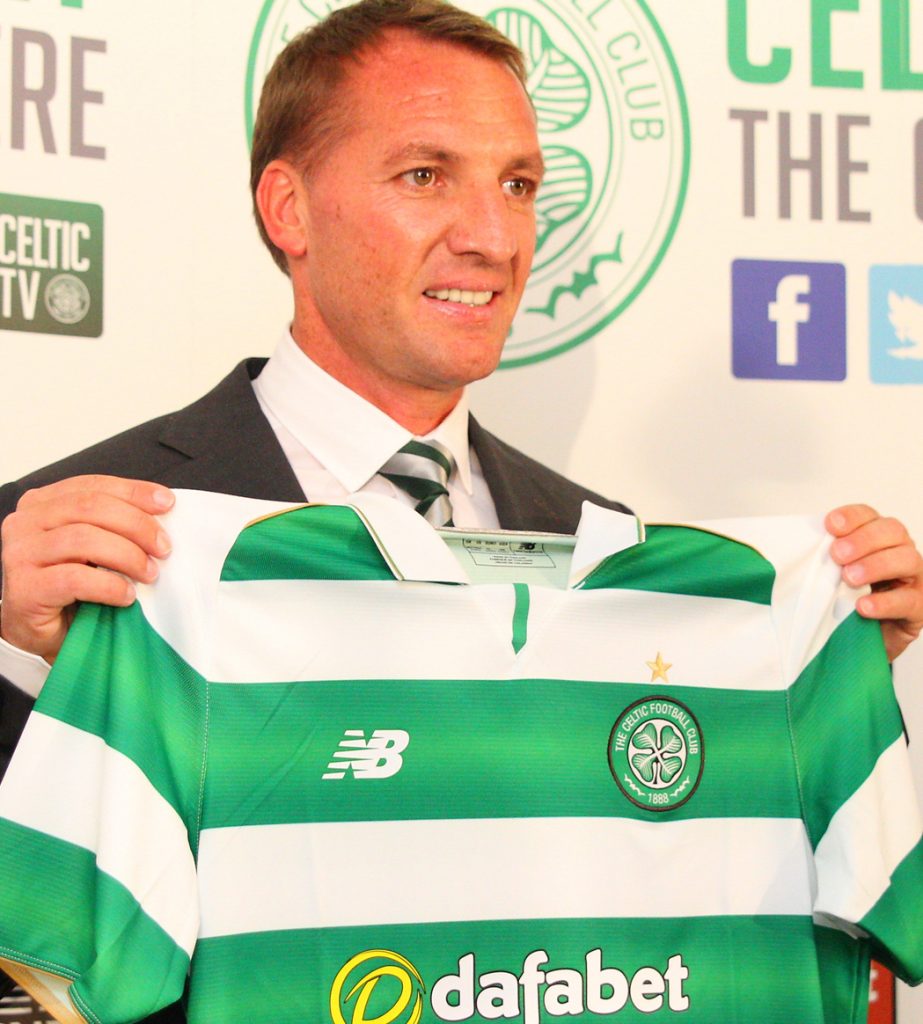 GETTING SHIRTY…Brendan gets the feel of the world famous Hoops. 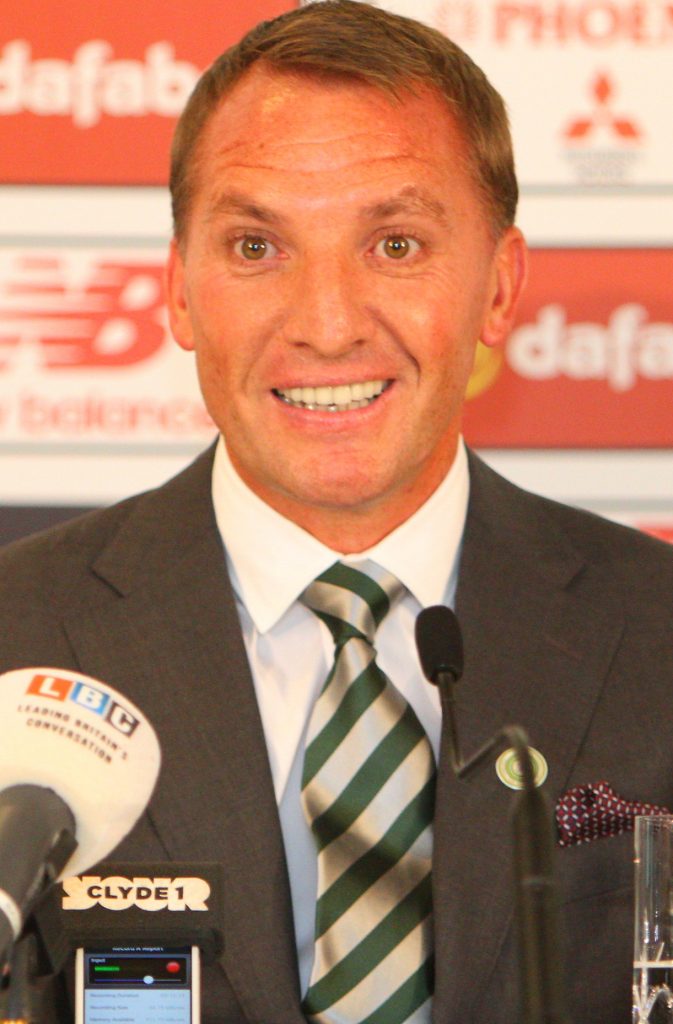 MEET THE PRESS…Brendan’s obviously delighted to be here. 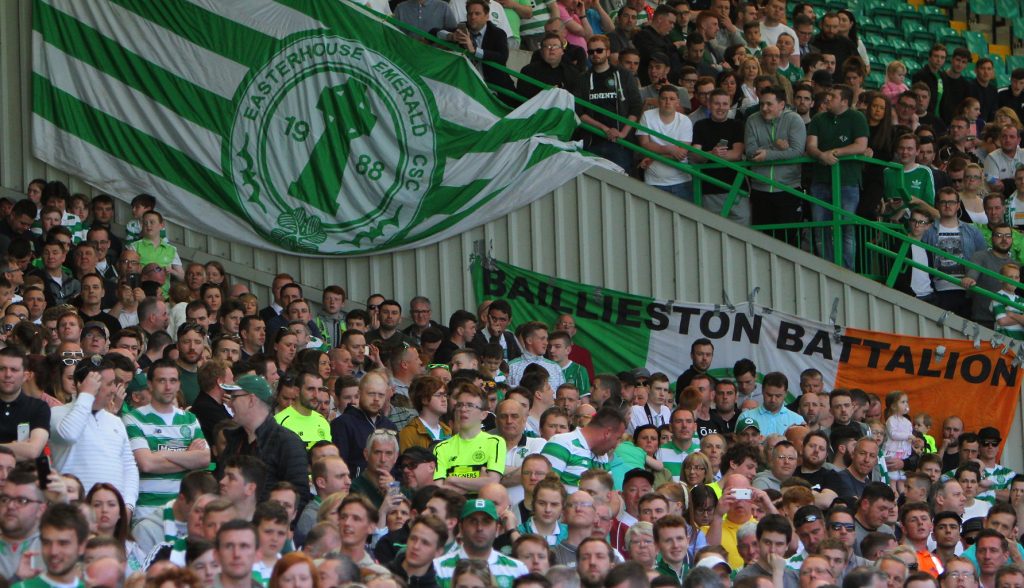 CHEERS…Celtic fans turn out in their thousands to welcome the new boss. 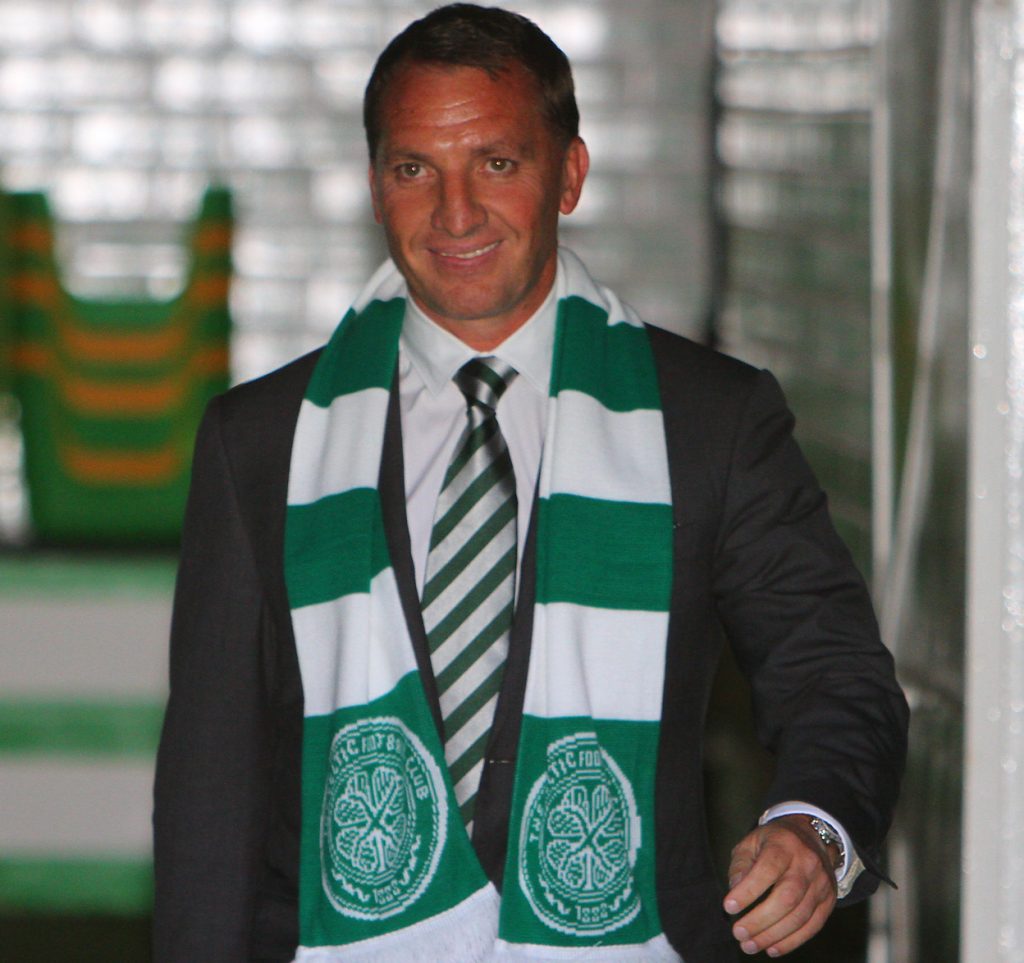 THIS IS HOW IT FEELS…Brendan holds aloft the Celtic scarf to the rapturous applause of the fans. 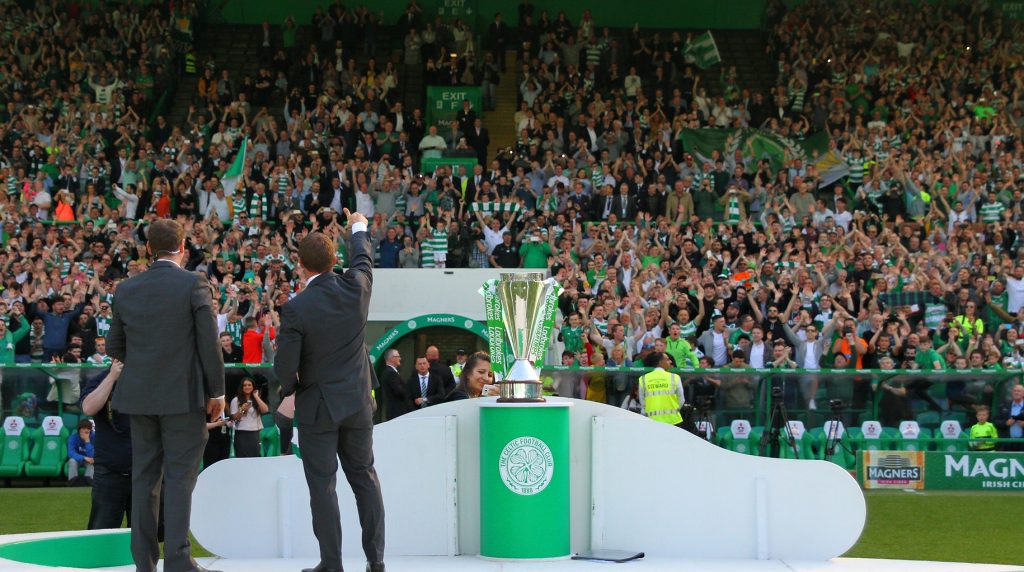 FAN-TASTIC…Brendan acknowledges the support in his speech. 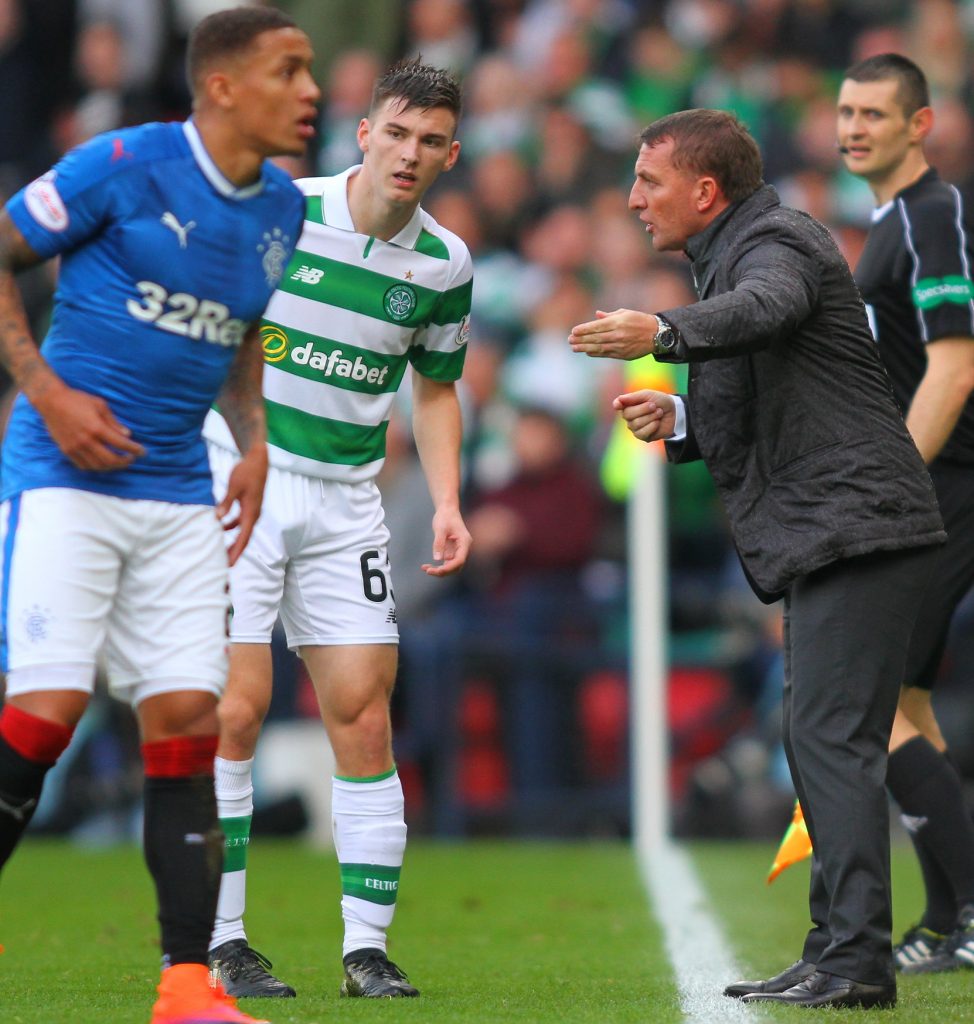 GLASGOW BELONGS TO ME…Brendan passes on some information to Kieran Tierney on their way to a 1-0 Betfred League Cup semi-fnal win over the Ibrox side on October 23, 2016. 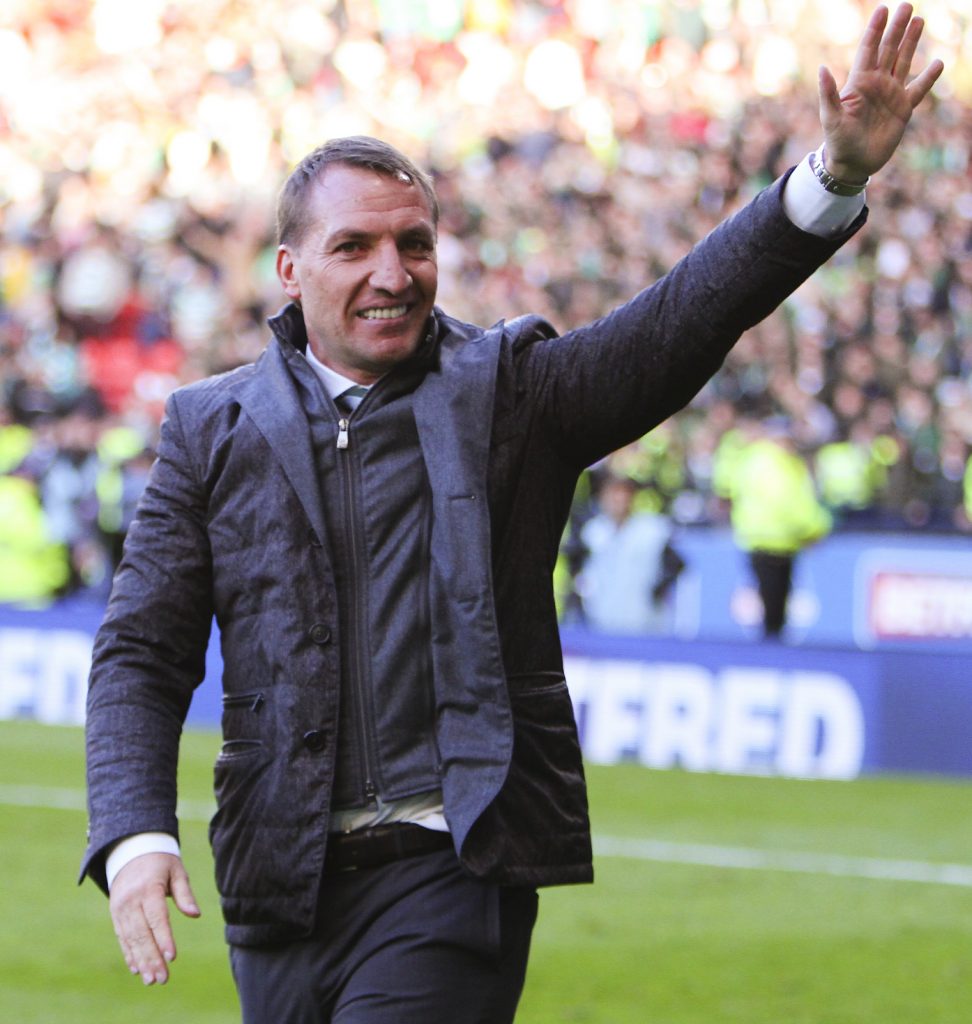 THE FINAL RECKONING…Brendan shares the joy as the Hoops set up a Betfred showdown with Aberdeen. 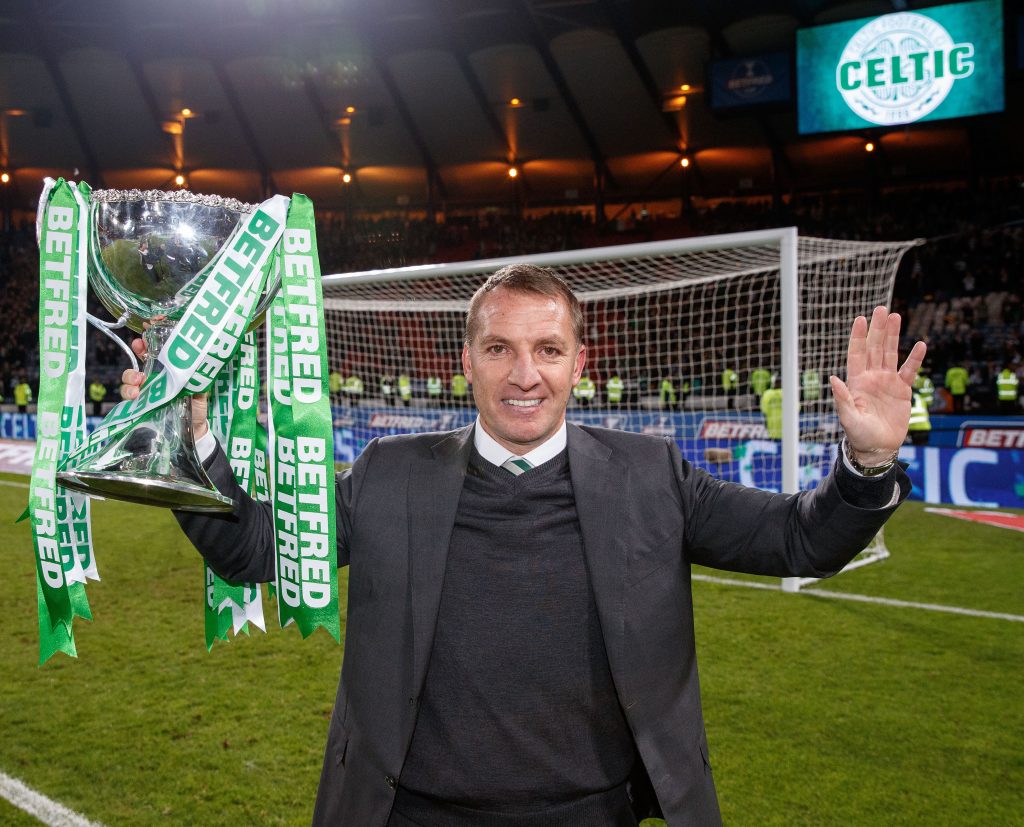 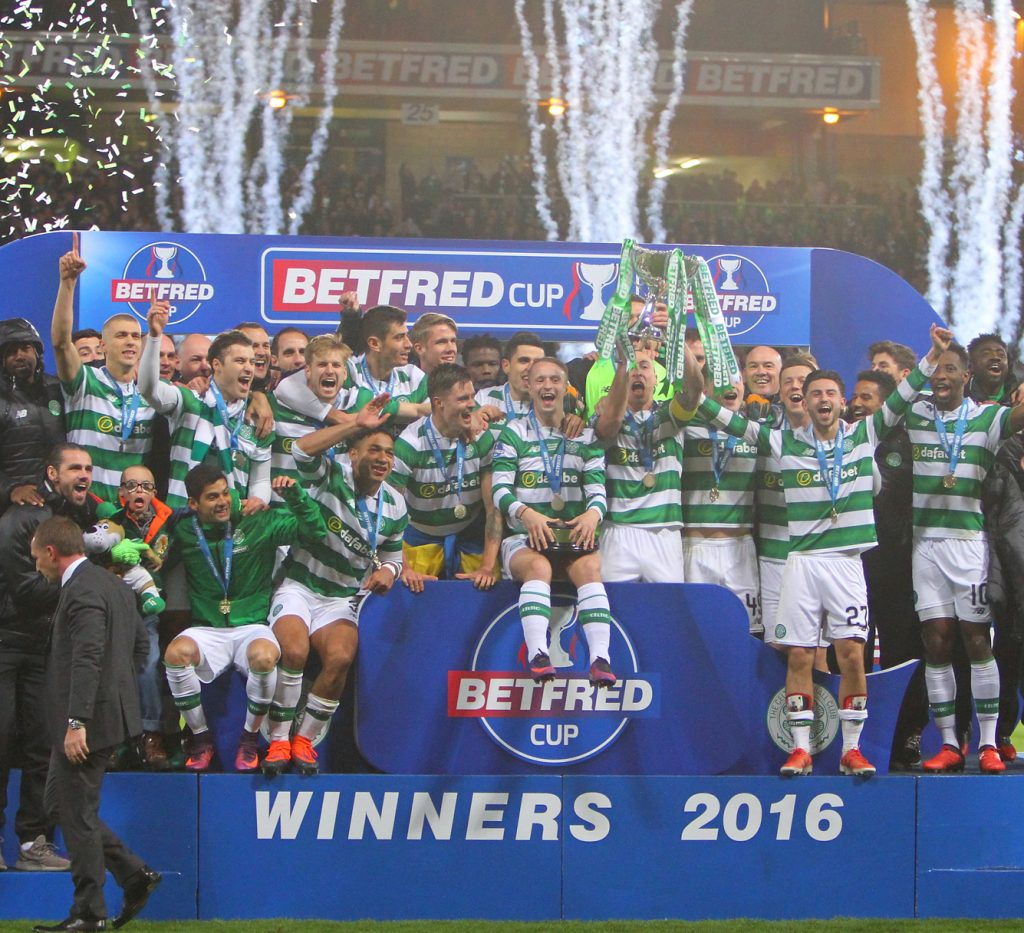 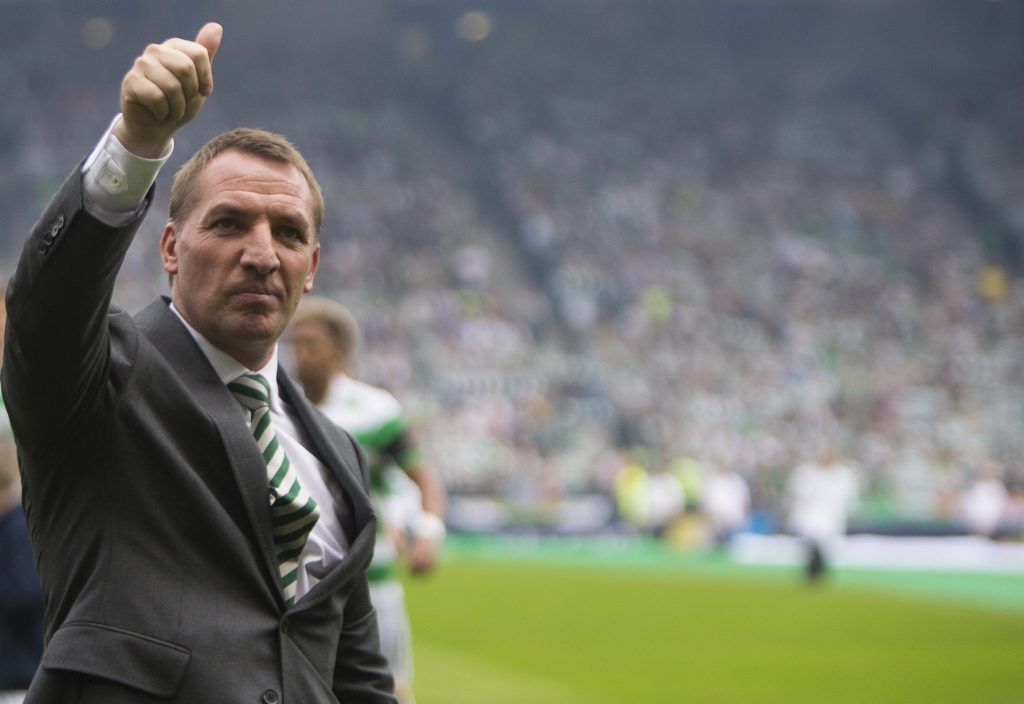 CALM BEFORE THE STORM….Brendan Rodgers gives the thumbs up as he prepares for the kick-off to the Scottish Cup Final meeting with Aberden on May 27, 2017. 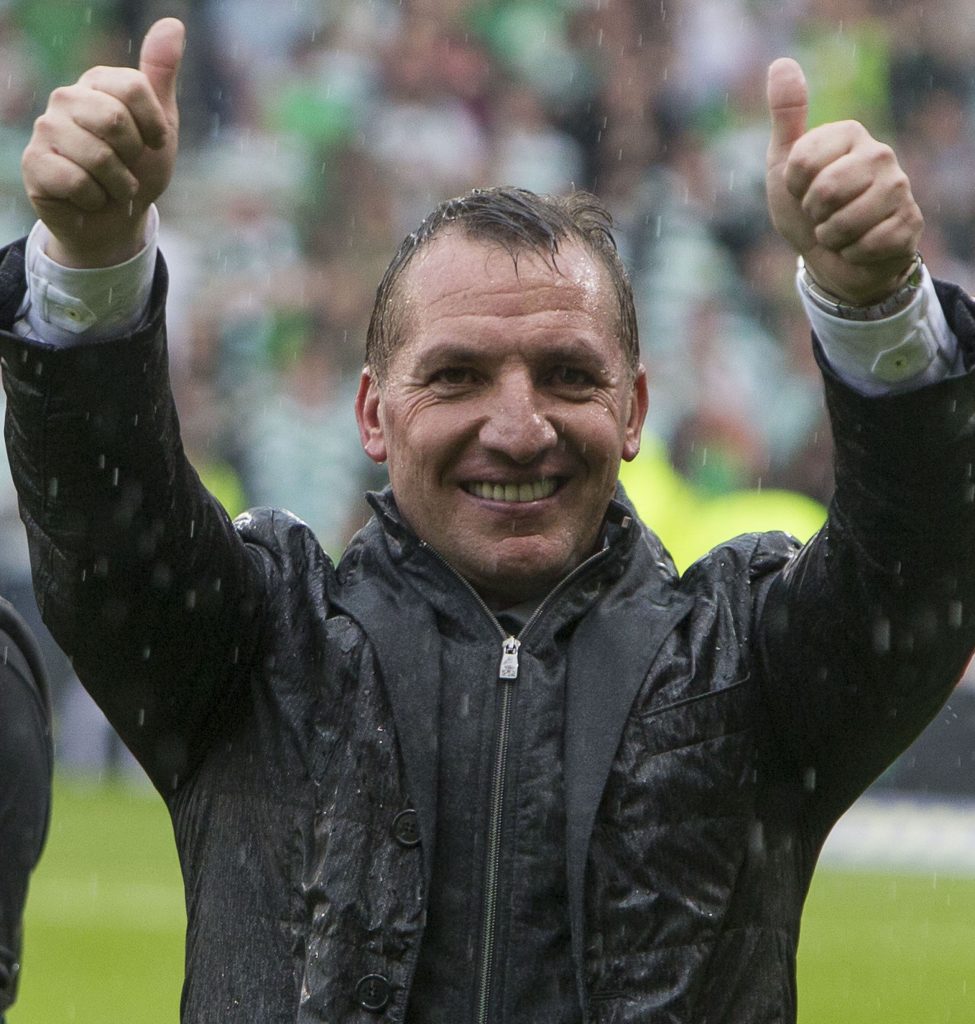 JOB DONE…Brendan Rodgers is all smiles following the 2-1 success over the Dons. 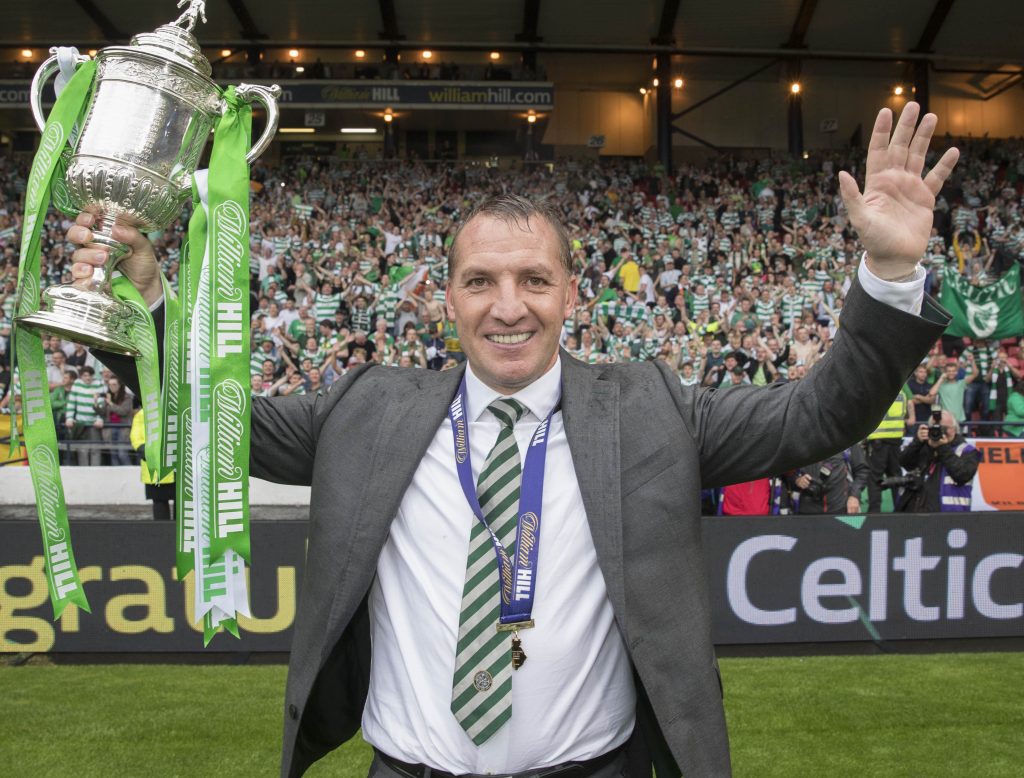 THE TREBLE IS WON…the Hoops boss holds aloft the Scottish Cup as he completes the team’s domestic domination in his first season. 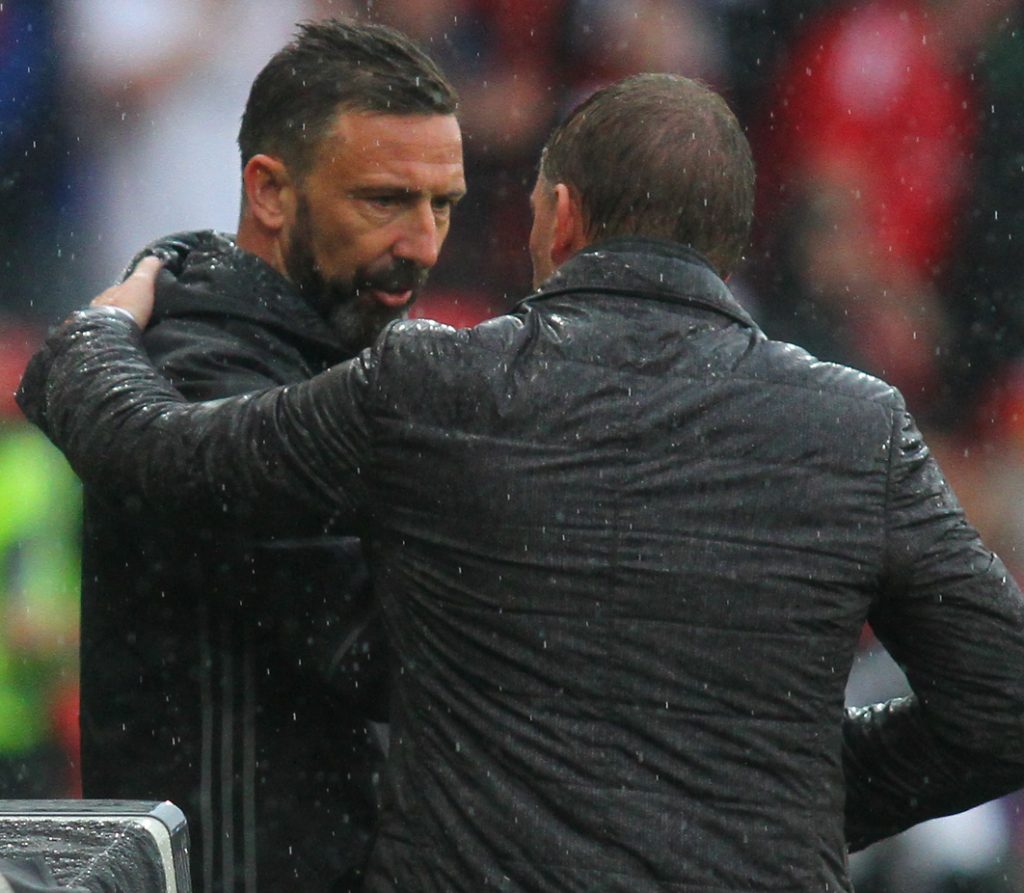 THE VICTOR AND THE VANQUISHED…Brendan Rodgers consoles dejected Dons gaffer Derek McInnes at the final whistle. 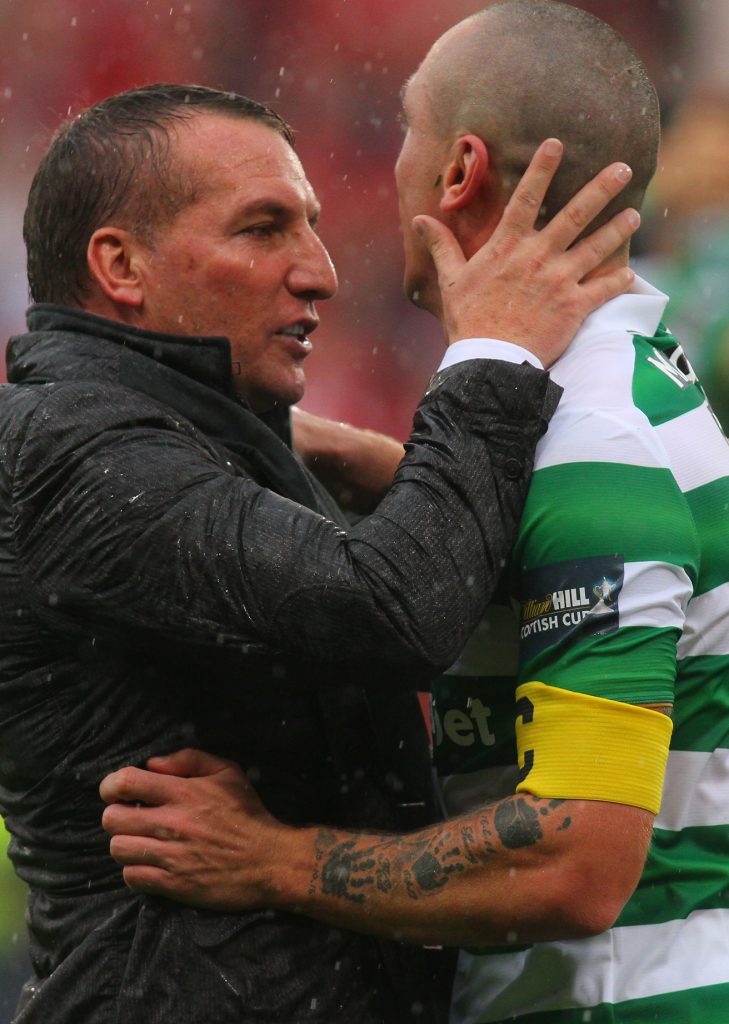 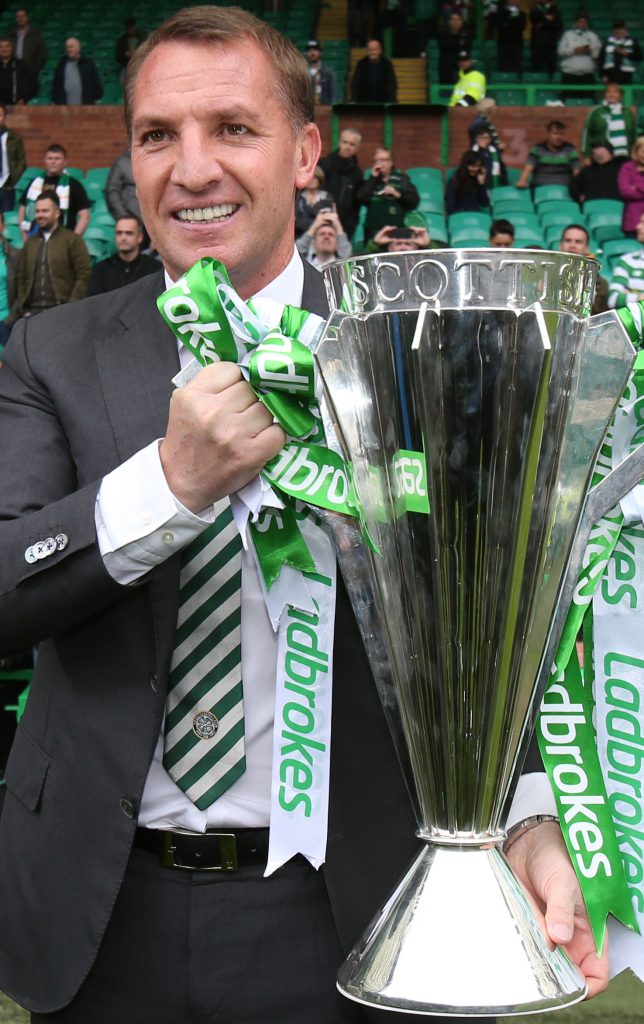 TITLE-WINNER…Brendan Rodgers with the Premiership trophy. 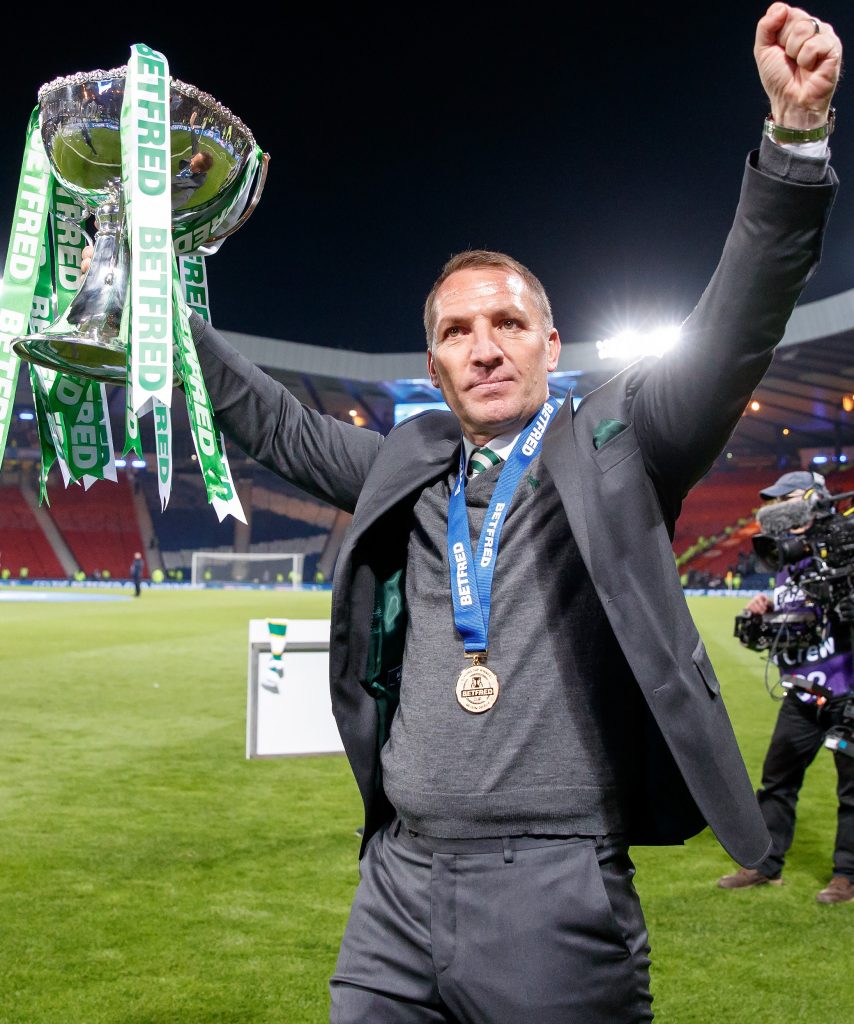 ACTION REPLAY…Brendan Rodgers with the League Cup after last season’s 2-0 win over Motherwell. 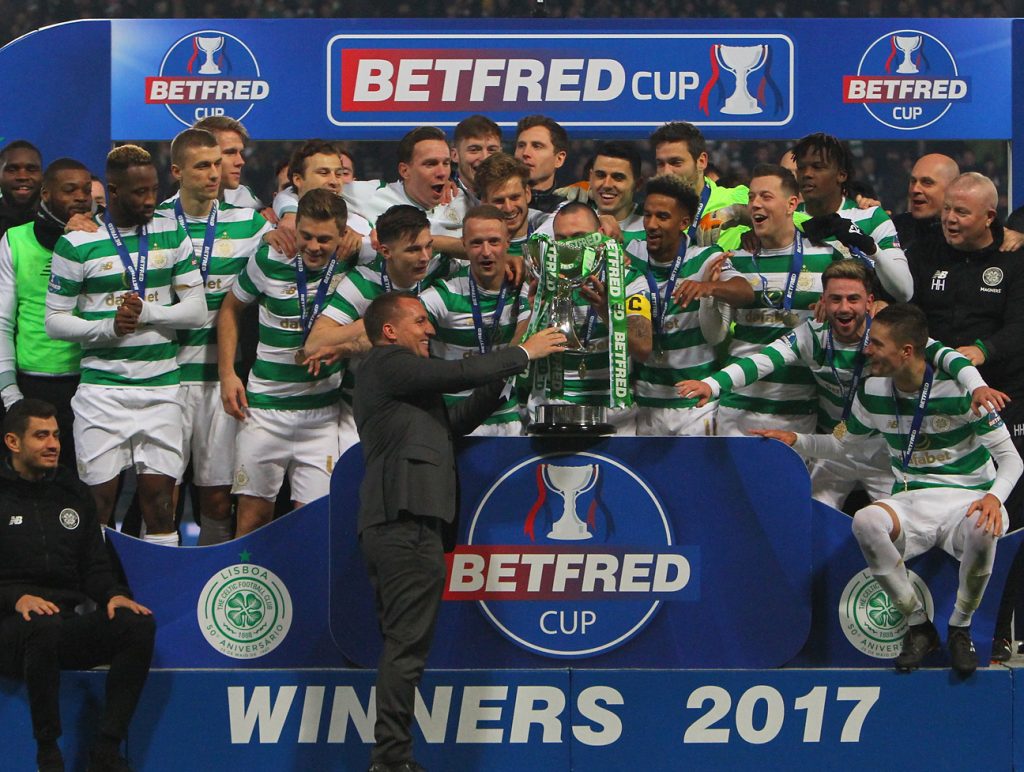 THE GLITTERING PRIZE…Brendan Rodgers joins in the celebrations. 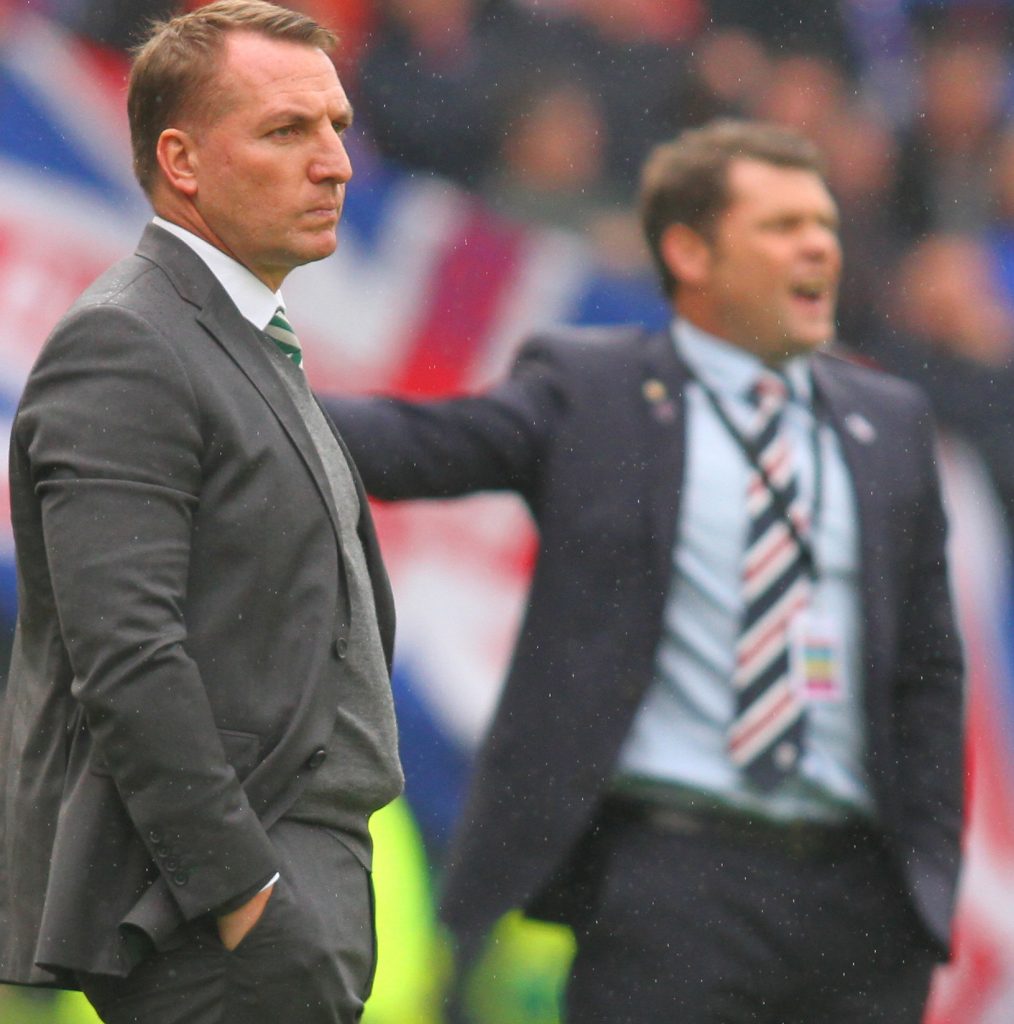 DAY OF RECKONING…Brendan Rodgers on the touchline with Gers caretaker boss Graeme Murty during last season’s Scottish Cup semi-final. The Hoops triumphed 4-0 – and the Ibrox man was heading out of a job. 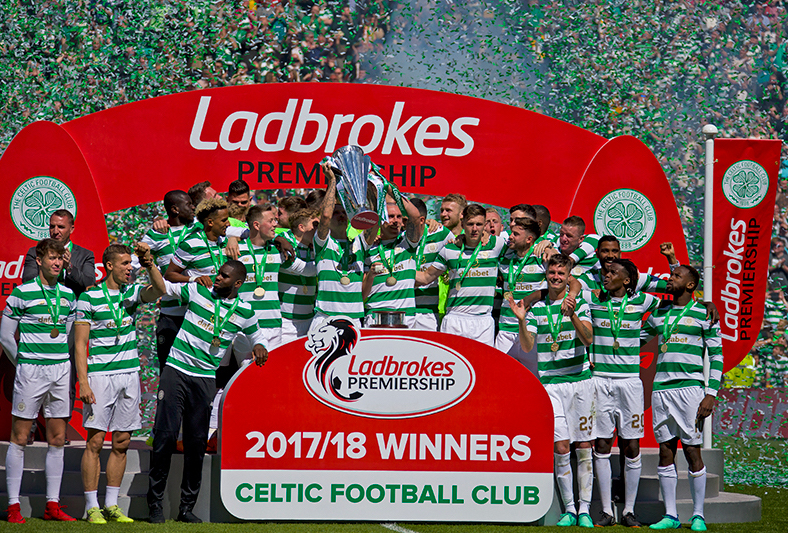 BACKROOM BHOY…Brendan Rodgers (back row, top left) is calmness personified as the players whoop up their title success. 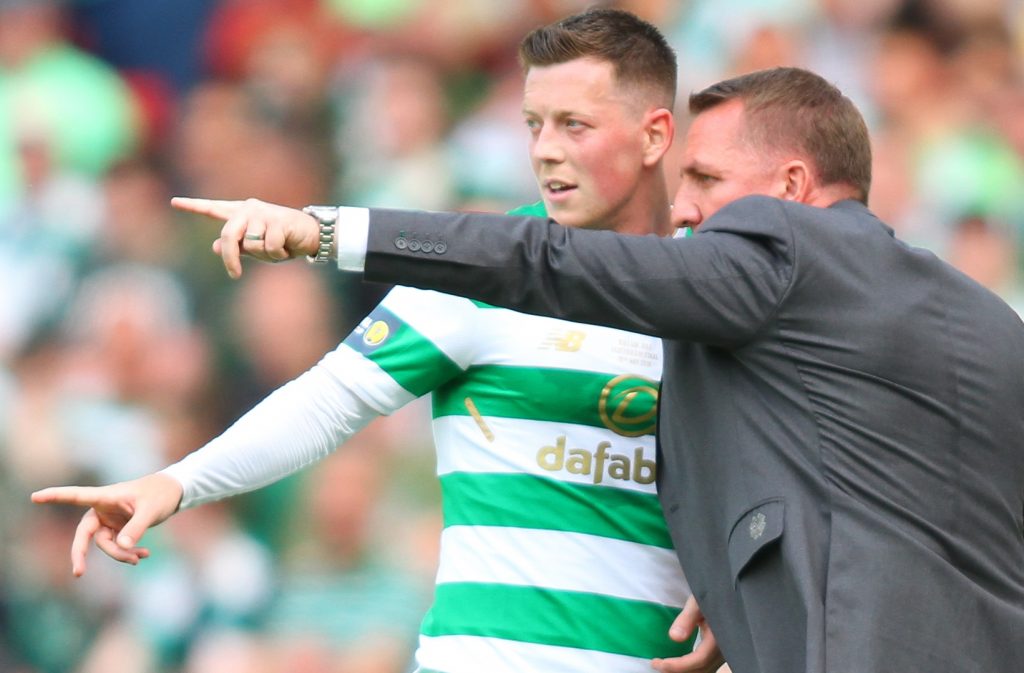 THE WAY AHEAD…Brendan Rodgers points the way to Callum McGregor during the 2-0 Scottish Cup Final win over Motherwell. 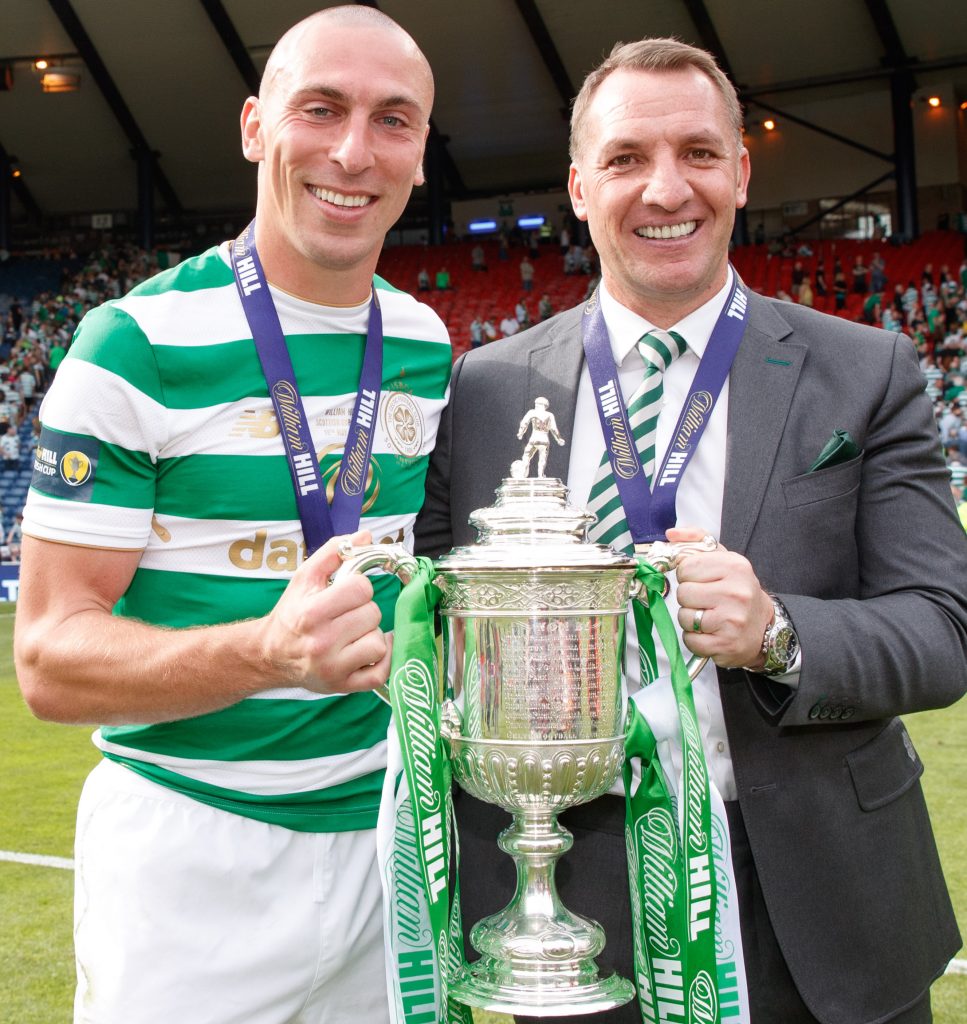 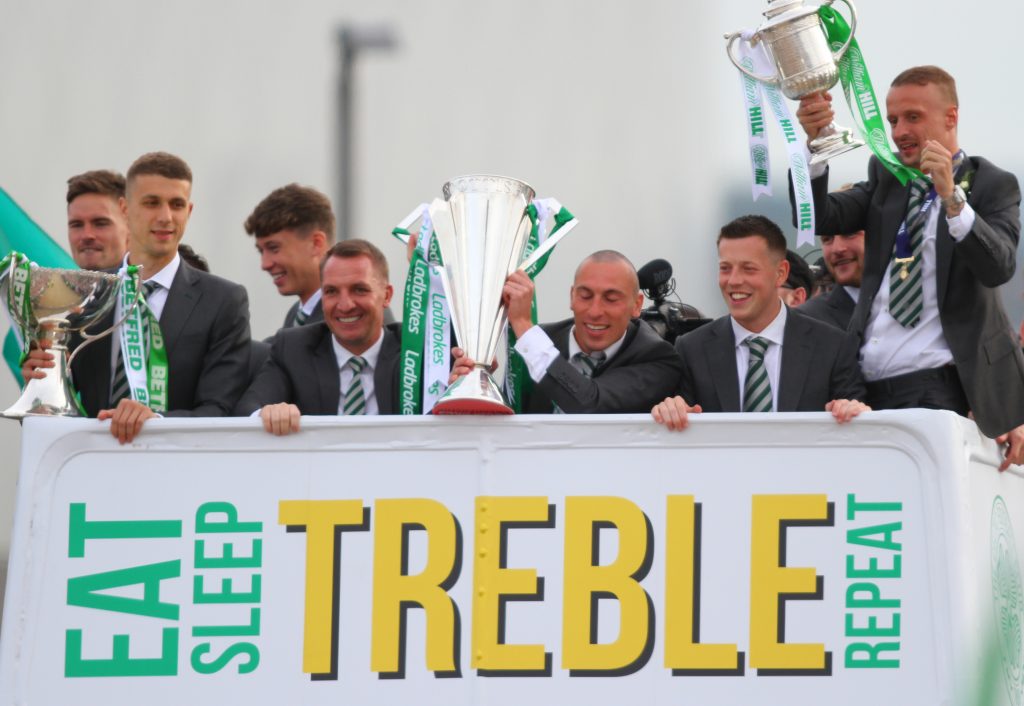 TREBLE YELL…Brendan Rodgers and his players celebrated their double treble success on board the open top boss heading for Paradise. 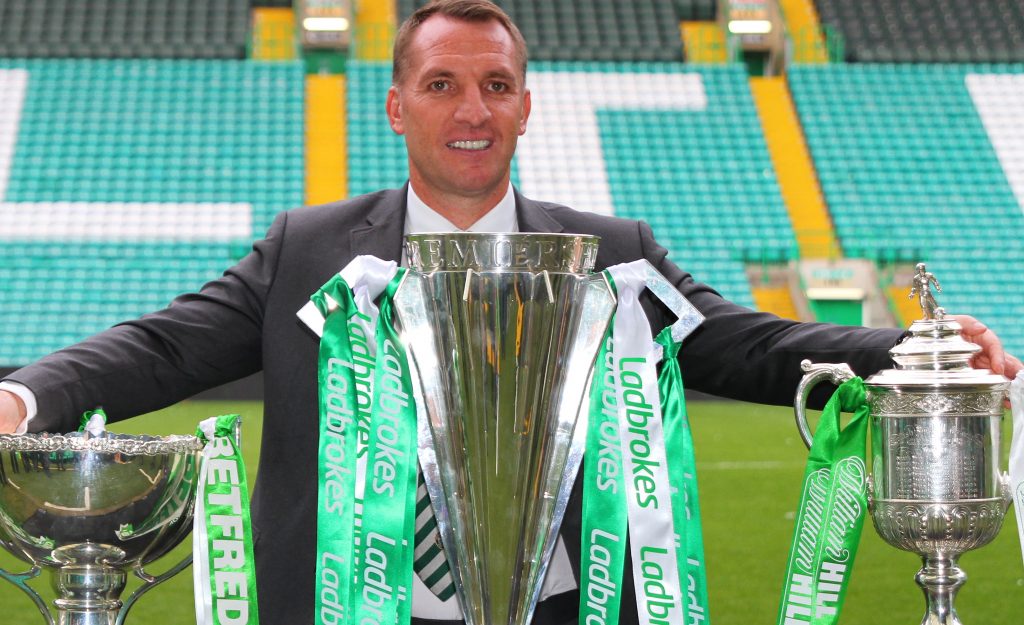 THE SILVERWARE CLEAN SWEEP…Brendan Rodgers with the domestic hat-trick of the League Cup, Premiership trophy and the Scottish Cup. Pics: Geo.