CELTIC have the mesmerising opportunity of winning an unprecedented treble treble when they take on Hearts in the Scottish Cup Final at Hampden on May 25.

It’s a date that is carved into the Parkhead club’s history – the day, 52 years ago, that saw legendary skipper Billy McNeill lift the European Cup in Lisbon when goals from Tommy Gemmell and Stevie Chalmers overcame mighty Inter Milan to ensure Jock Stein’s unforgettable Lions had conquered all to become the first UK club to lift the most glittering of all prizes.

Next month, Neil Lennon’s players have the chance of going into the Celtic Hall of Fame when they line up against the Edinburgh outfit, just 90 minutes away from picking up their NINTH successive domestic honour over a sensational three-year period.

The eighth consecutive championship is already heading for Paradise and the title should be done ad dusted long before the grand finale at the national stadium as the curtain comes down on another special campaign.

Goals from James Forrest, Odsonne Edouard and Tom Rogic defeated Aberdeen 3-0 in a rousing semi-final yesterday to set up the silverware showdown with Hearts. 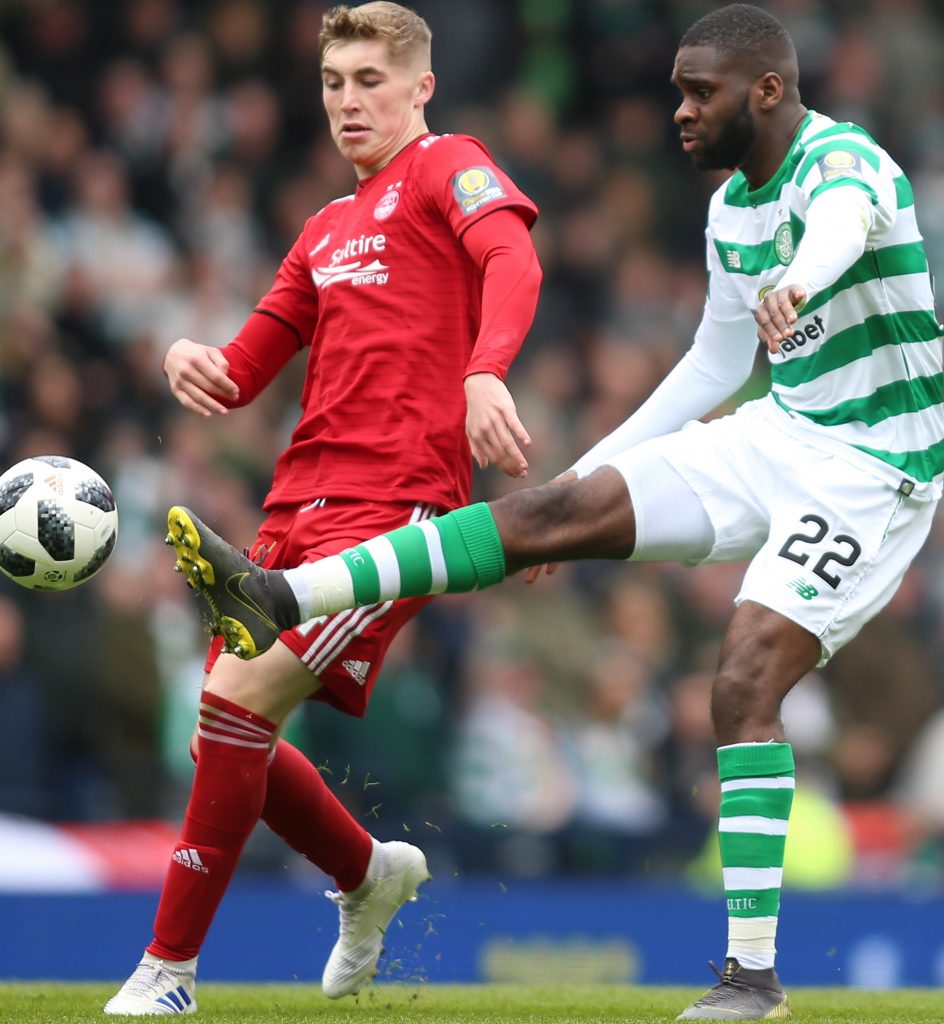 FOR MY NEXT TRICK…Odsonne Edouard displays his ball skills to Dons’ Dean Campbell. 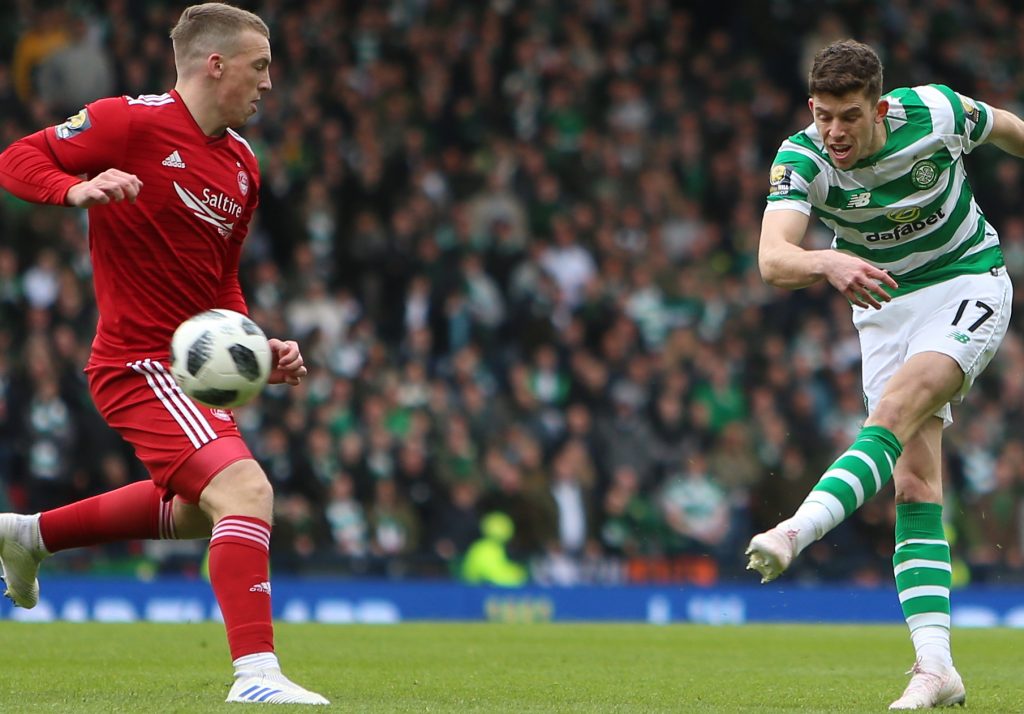 WALLOP…Ryan Christie fires a shot at goal as Lewis Ferguson is too late to challenge. 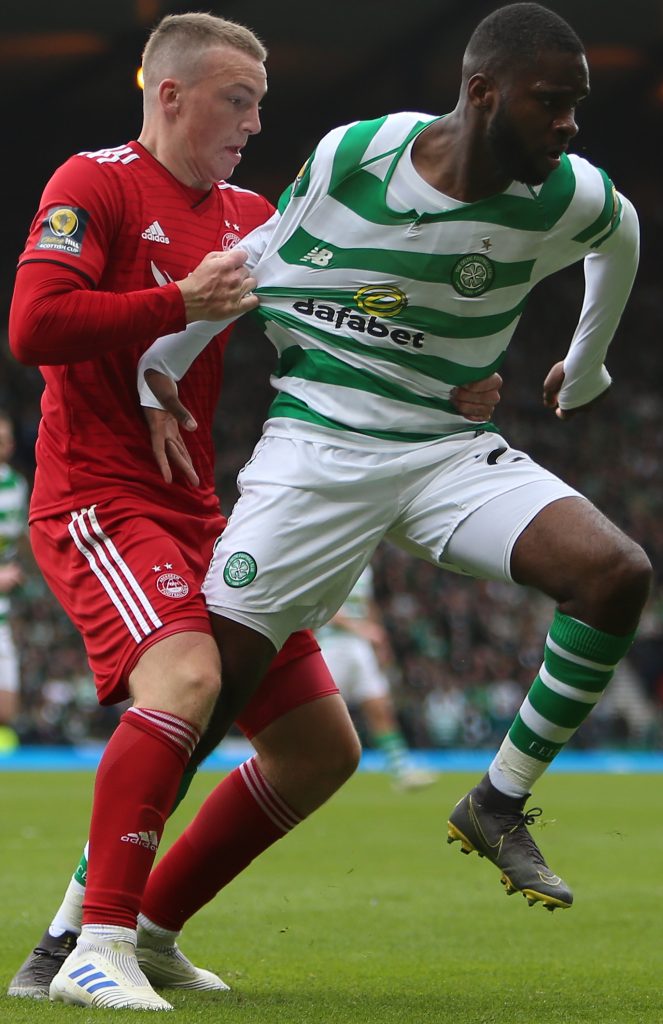 HOLD ON…Odsonne Edouard is hauled back by Lewis Ferguson. 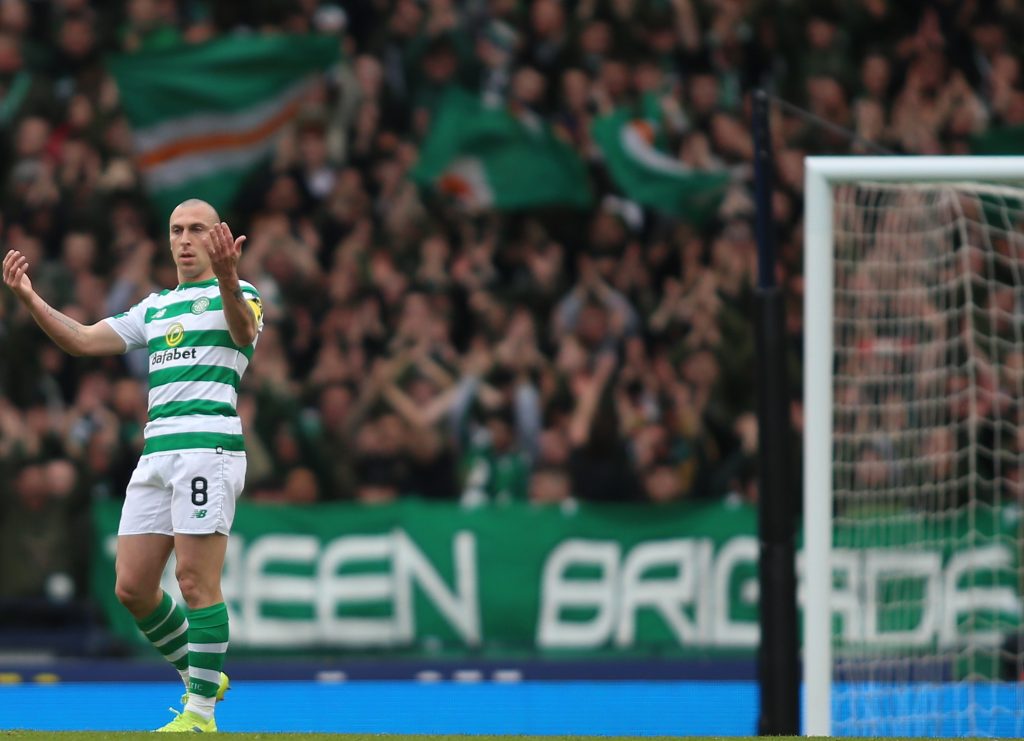 HAIL, HAIL…Scott Brown gets backing from the Celtic support. 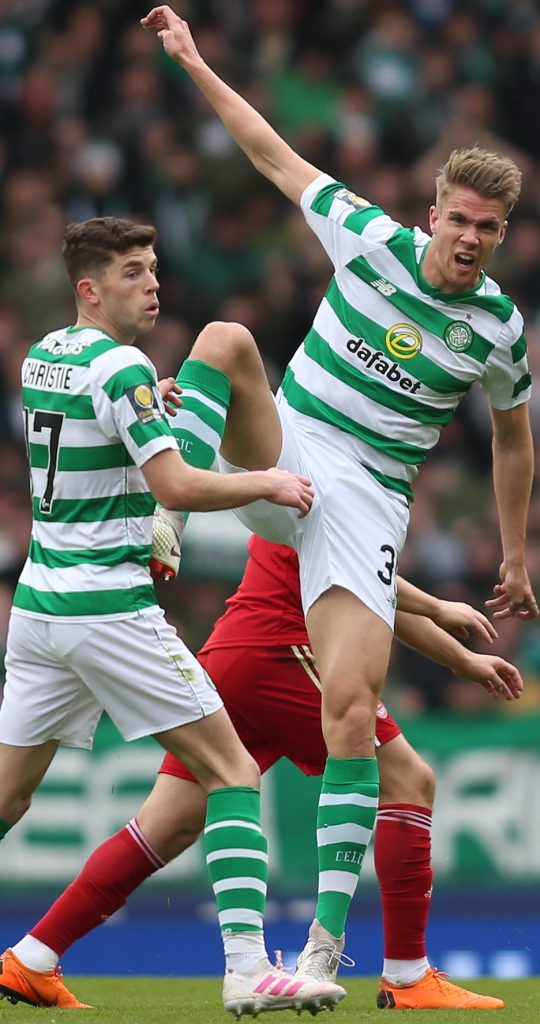 HEADMASTER…Kristoffer Ajer and Ryan Christie are in control. 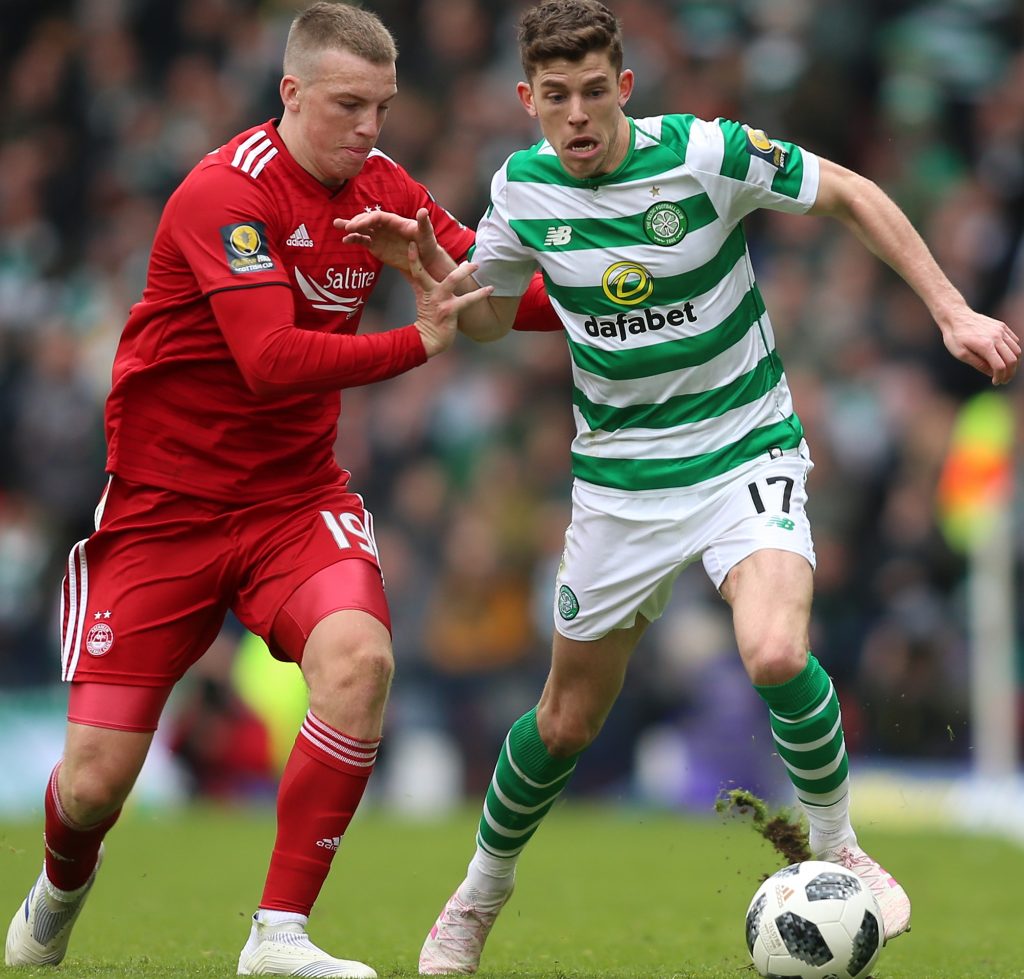 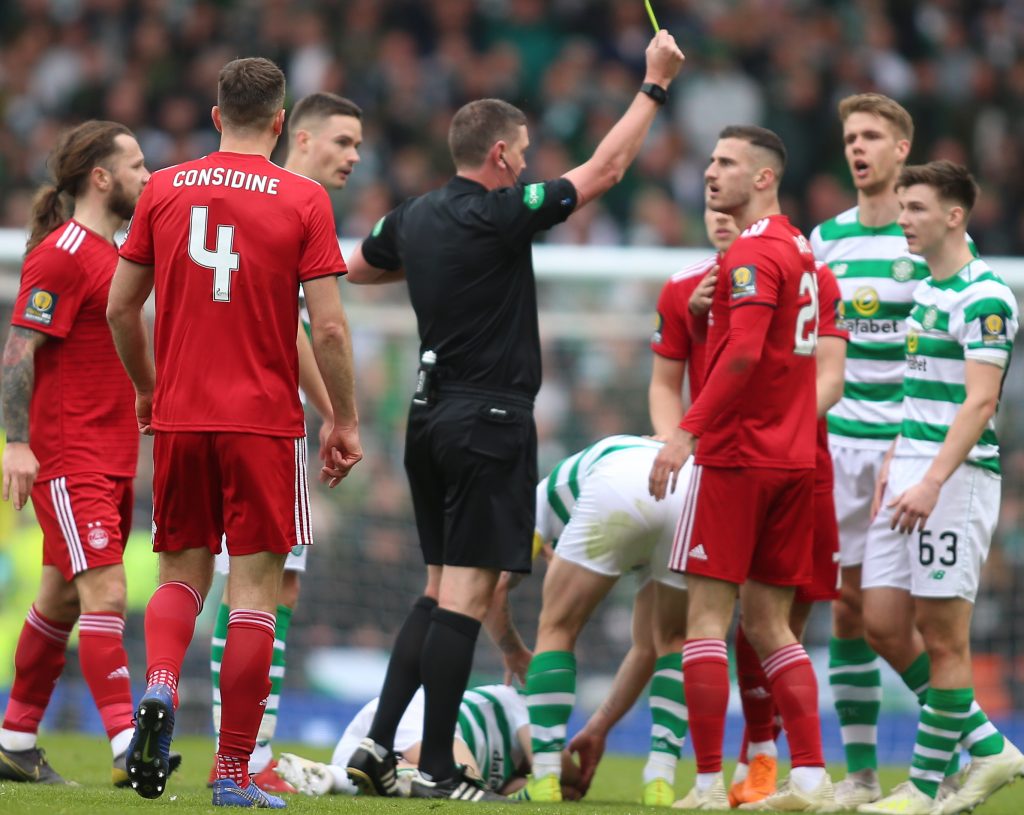 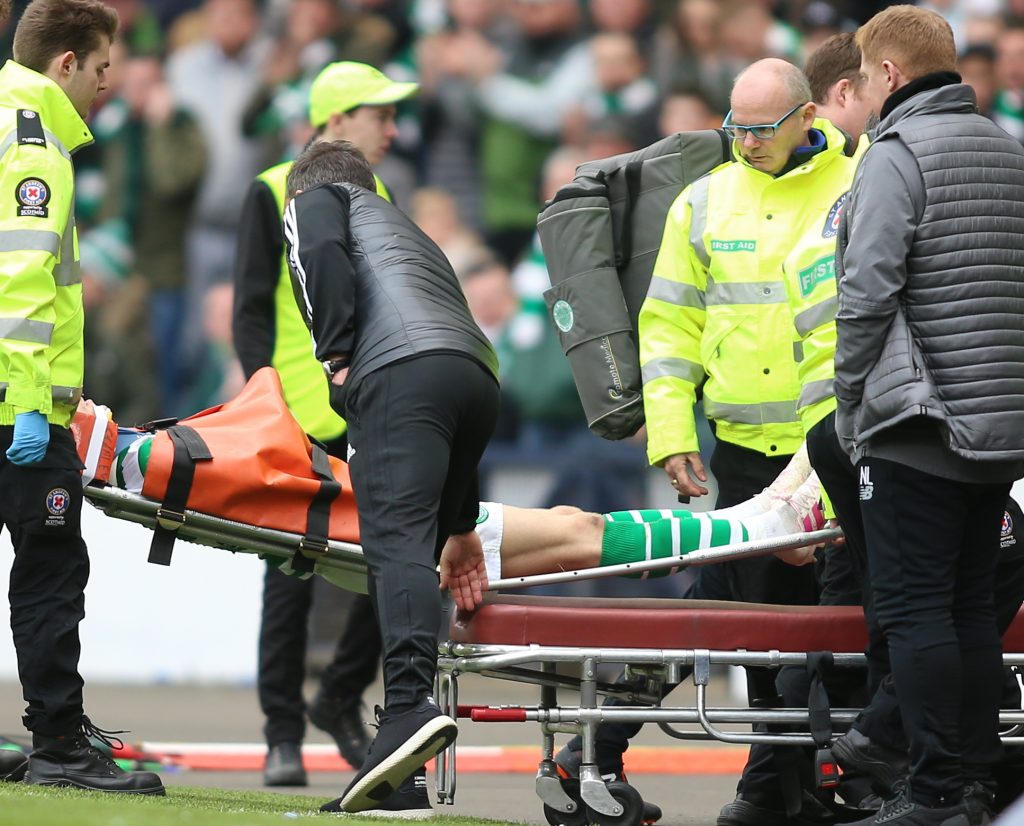 SAD EXIT…Ryan Christie is stretchered off with managers Neil Lennon and Derek McInnes checking the situation. 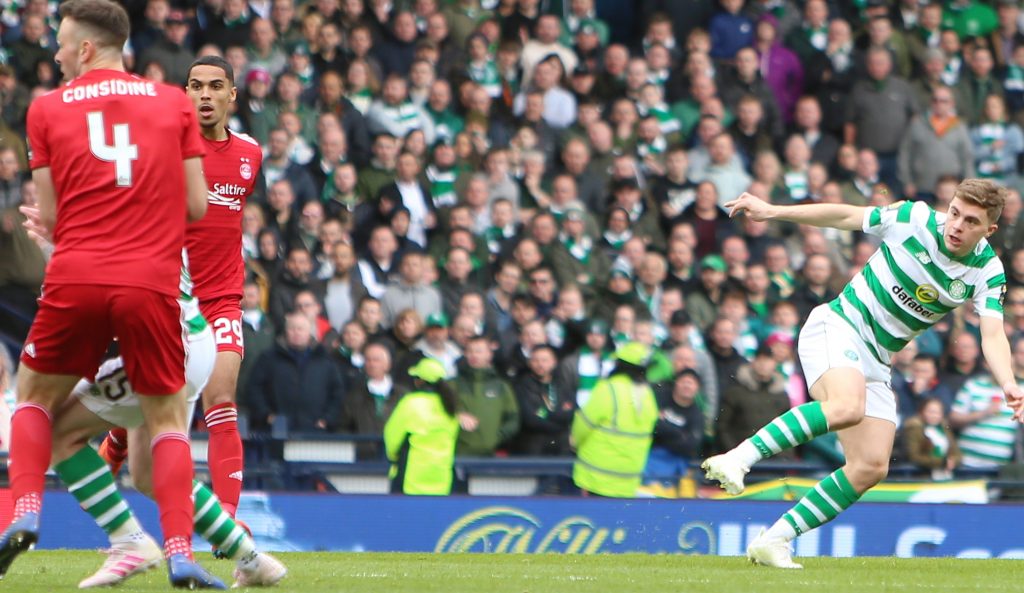 SPECTACULAR…on-fire James Forrest sizzles in the opening goal with an unstoppable left-foot strike. 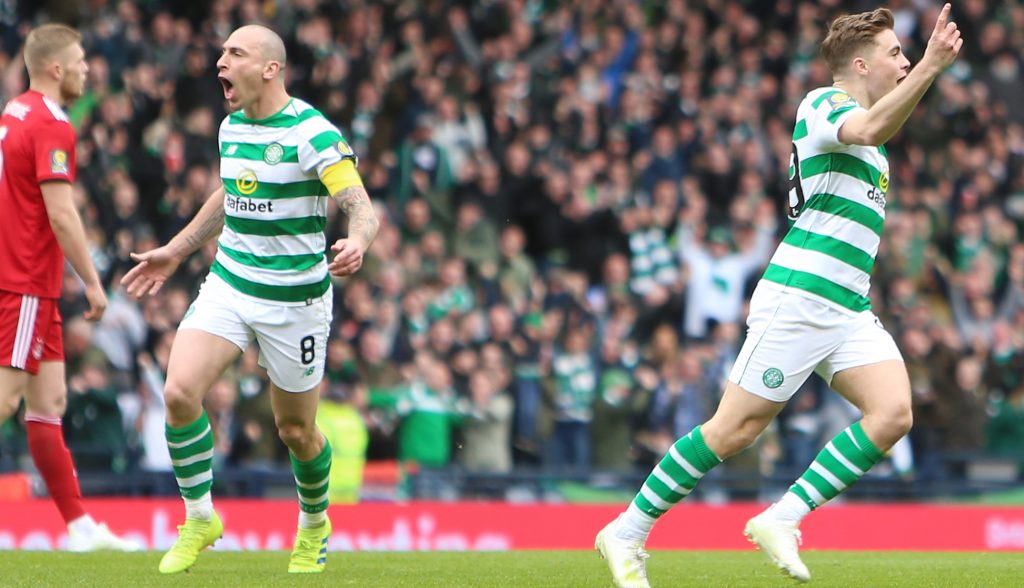 PICK IT OUT…James Forrest runs away in triumph as Scott Brown acclaims the strike.

WONDER, BHOY…James Forrest is congratulated by his delighted team-mates. 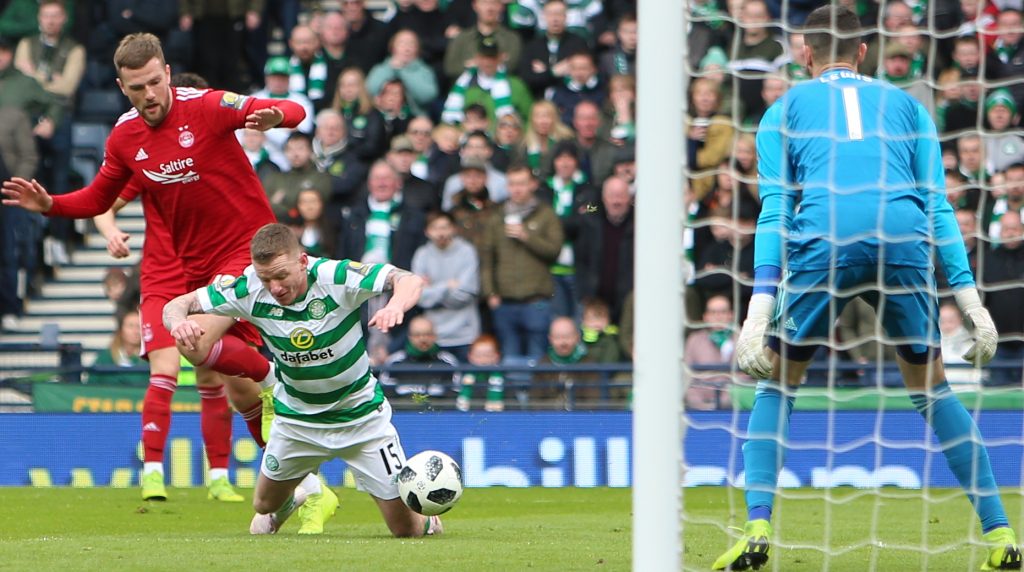 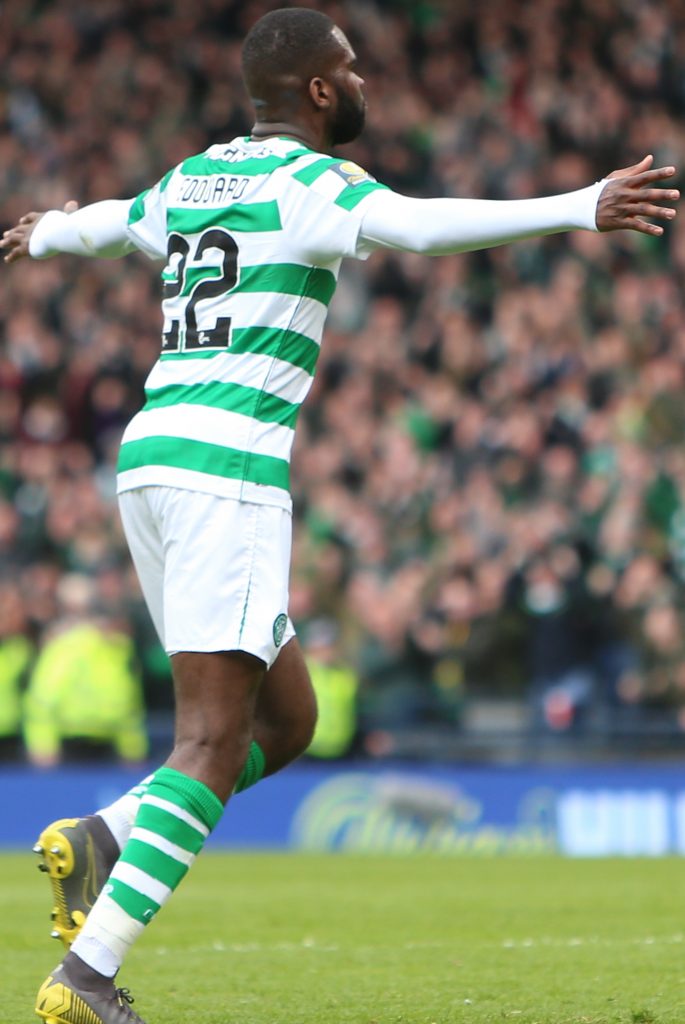 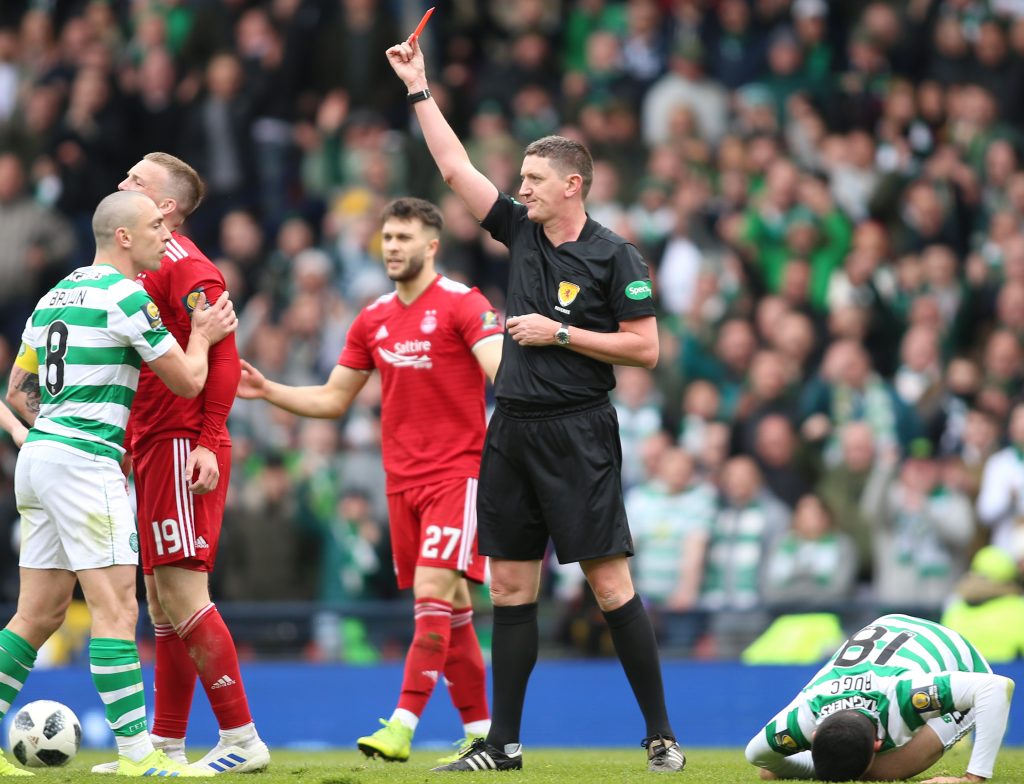 SEEING RED…Tom Rogic is left in a heap after a reckless challenge from Lewis Ferguson that sees ref Craig Thomson unhesitatingly order off the Dons midfielder. 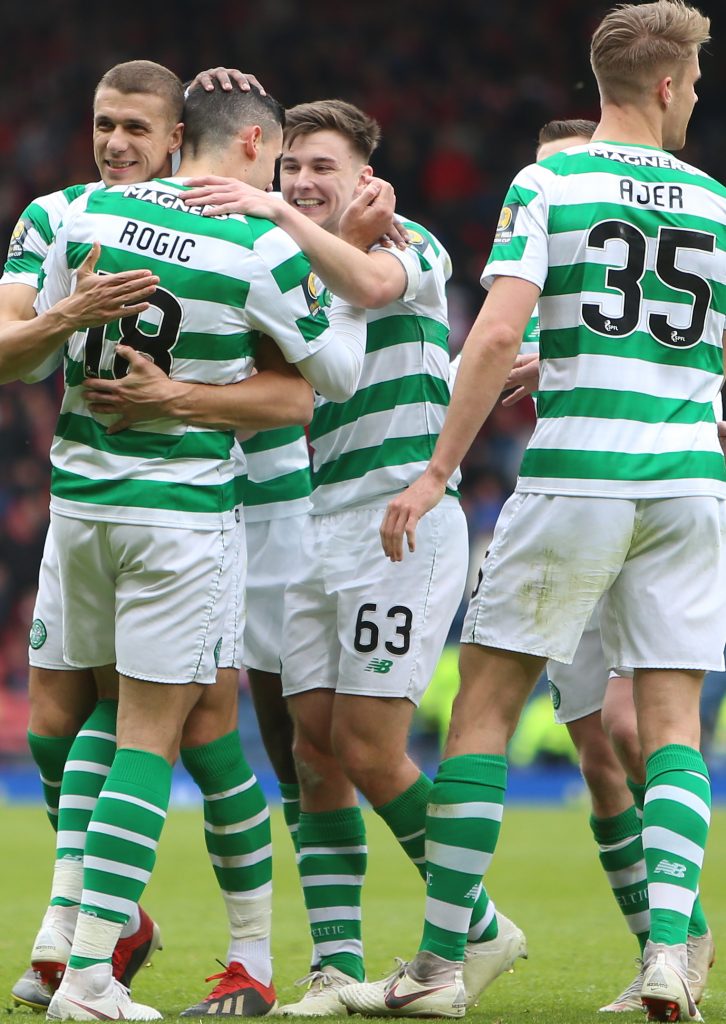 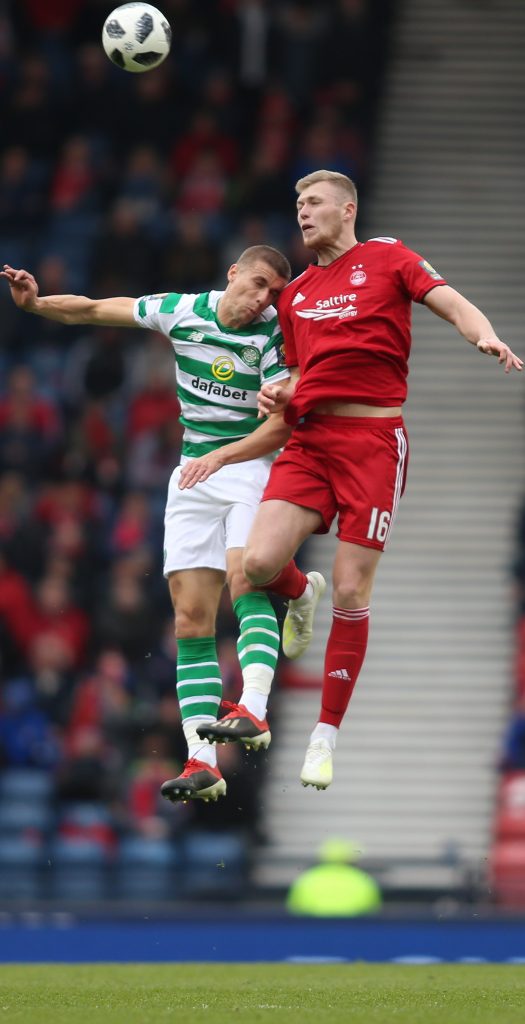 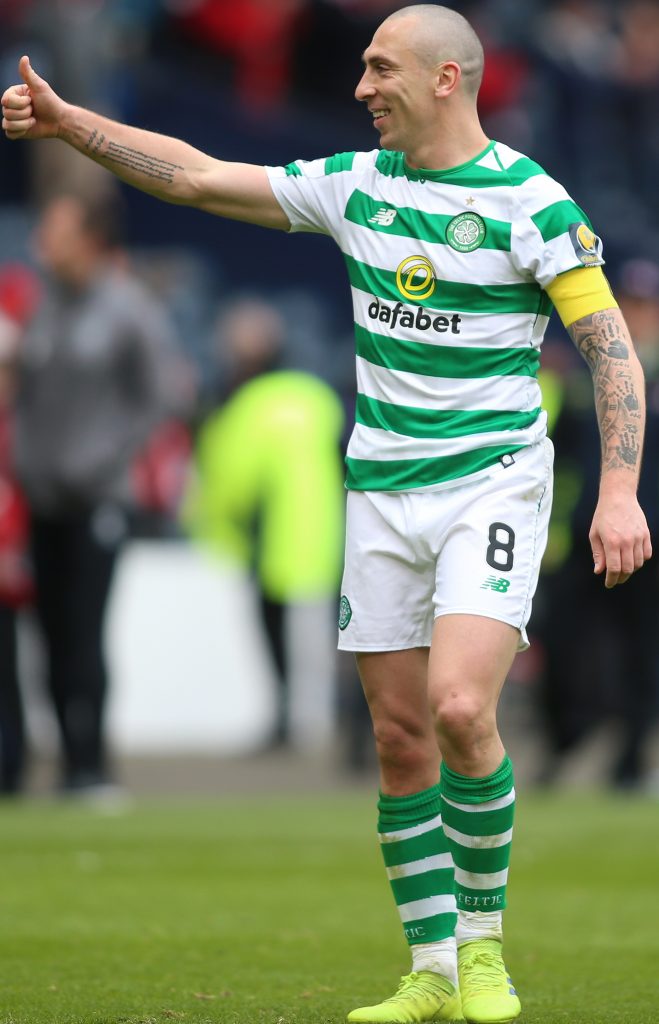 BIG HAND…Neil Lennon applauds his players and the Celtic fans at the end. 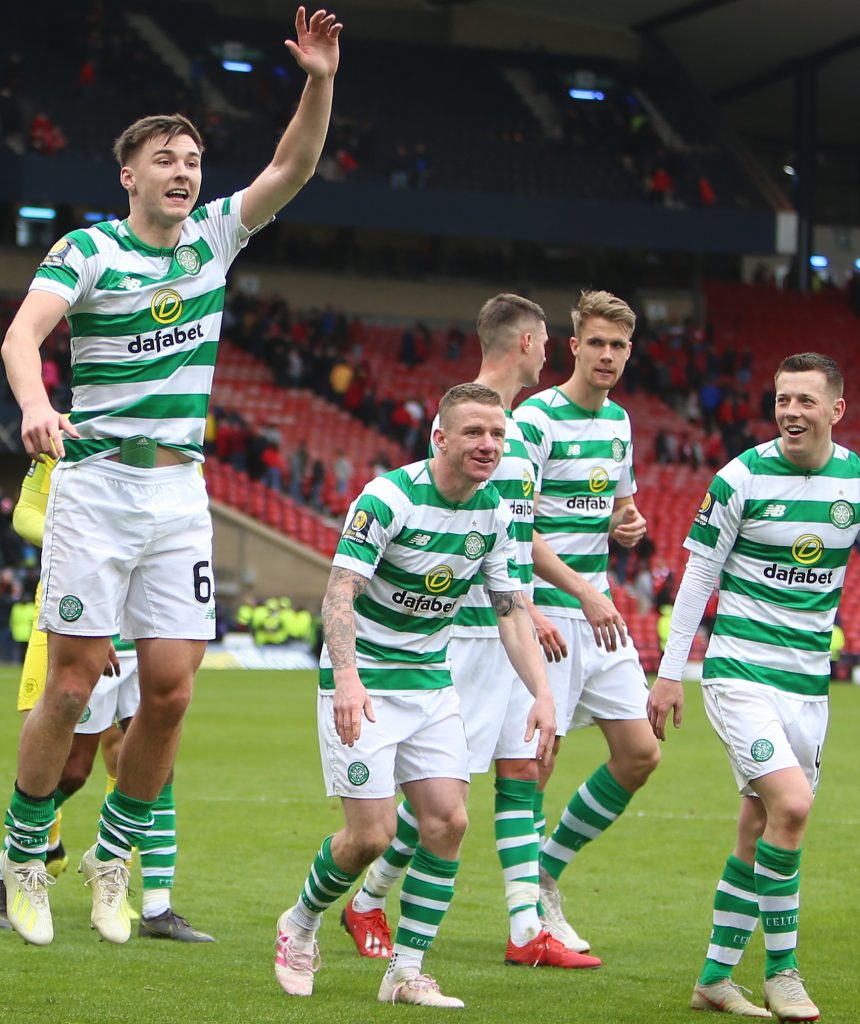 JIG OF JOY…Kieran Tierney leads the lap of honour with Jonny Hayes, Mikael Lustig, Kristoffer Ajer and Callum McGregor poised to join in.

MAY 25 AND HAMPDEN HERE WE COME…the Celtic players prepare for next month’s meeting with Hearts in the silverware showdown.