NEIL LENNON looks at his players and insists there are goals in this Celtic team.

Who is going to argue with the Hoops boss? The champions have hammered in FIFTEEN strikes in three Premiership games in their pursuit of the magical ninth successive title.

Hearts were the latest team to succumb as an attack led by Vakoun Issouf Bayo, making his first start for the club, thumped in three in a sunshine performance to add to the seven already crammed into the St Johnstone net in the opening league day of the season and the five that thumped into the Motherwell rigging a week later.

Despite faltering in the Champions League qualifiers, the Bhoys blasted in SIXTEEN goals in six games – five against FK Sarajevo, seven versus Nomme Kalju and four in the Cluj stumble.

Add the efforts from James Forrest and Odsonne Edouard in the 2-0 Europa League play-off first leg success in Glasgow on Thursday night and that comes to a massive THIRTY-THREE in 10 games. It would be fair to say Celtic fans have not been lacking in goalmouth action since the campaign’s kick-off.

Lennon’s men have scored in every competitive encounter and it must be hoped that trend continues in Sweden on Thursday in the return against AIK and Ibrox in the first Glasgow derby of the campaign on Sunday.

CQN‘s crack team of snappers was at Parkhead yesterday to capture the action. Here is the pick of the pics. 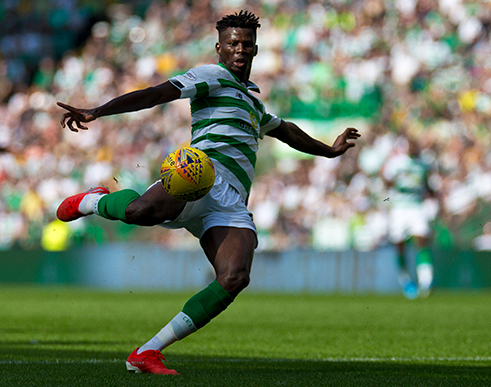 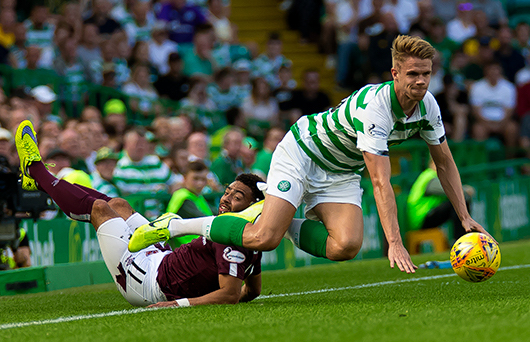 CRASH…Kristoffer Ajer is sent tumbling to the ground after a challenge. 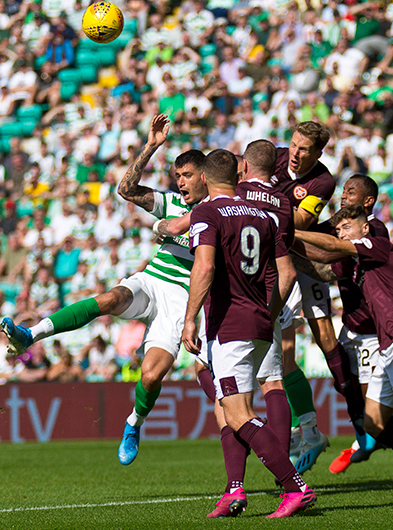 MY BALL…Nir Bitton tussles with the Hearts defence for a high cross. 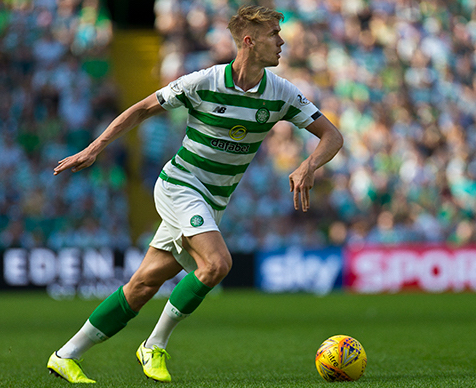 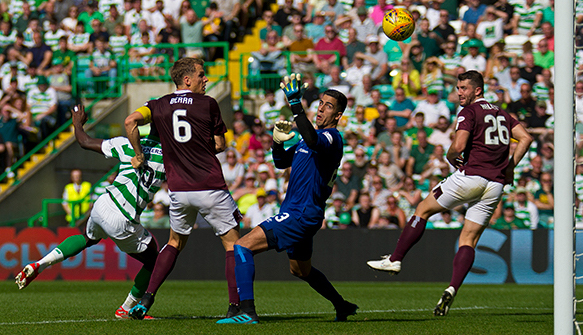 NUMBER ONE…Bayo celebrates his first start as he forces in the opening goal, despite the close attention of the Hearts defenders. 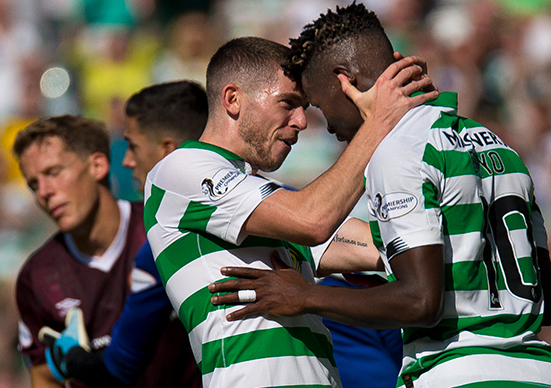 THAT’S MY BHOY…Bayo is congratulated by Ryan Christie, but Hearts skipper Christophe Berra doesn’t look quite to happy. 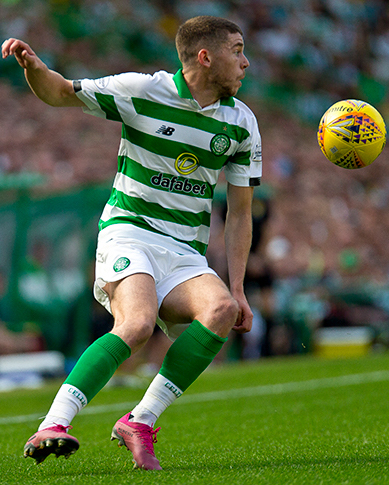 AMAZING GRACE…Ryan Christie about to get another move started. 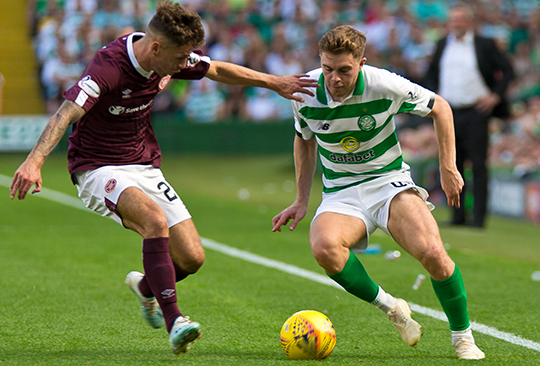 WORKING A FLANKER…James Forrest on the run. 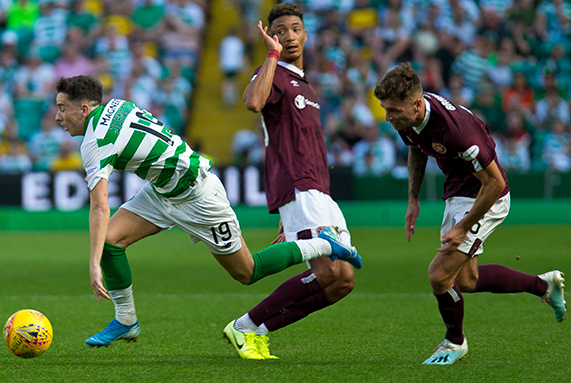 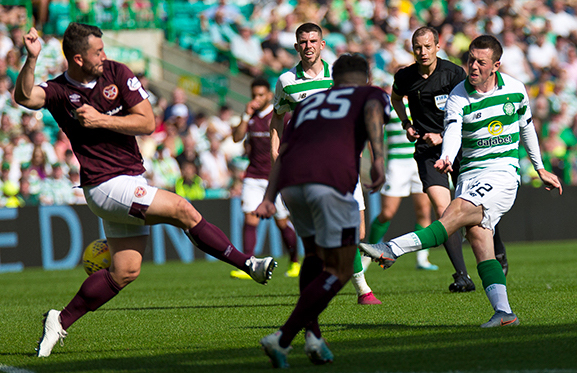 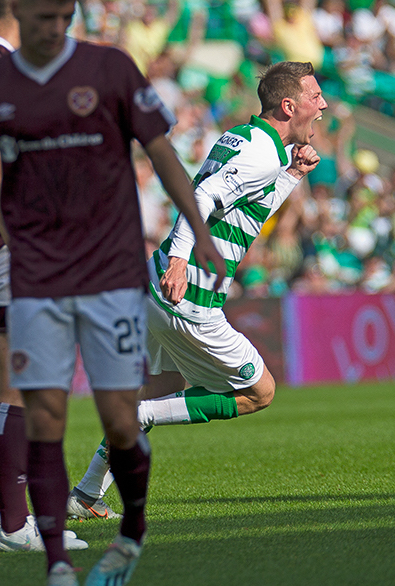 YIPPEE…McGregor races away in triumph after making it 2-0. 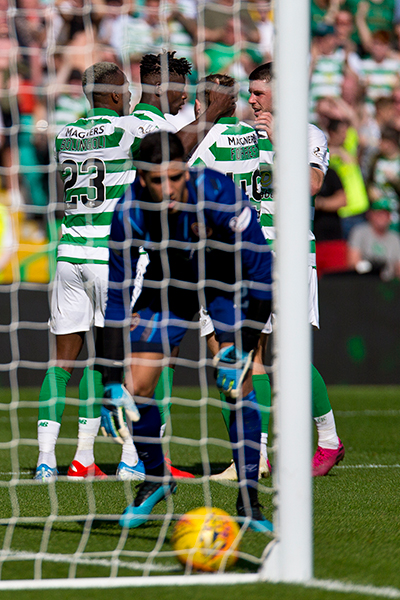 NUMBER THREE…Bayo is congratulated by Boli Bolingoli, James Forrest and Ryan Christie as dejected Hearts keeper Joel Pereira picks the ball out of the net. 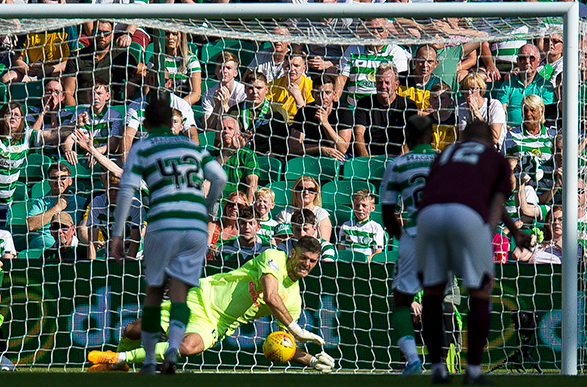 HERO – FOR A MOMENT…Fraser Forster gets down to push away Conor Washington’s penalty-kick, but the Hearts striker netted the rebound. 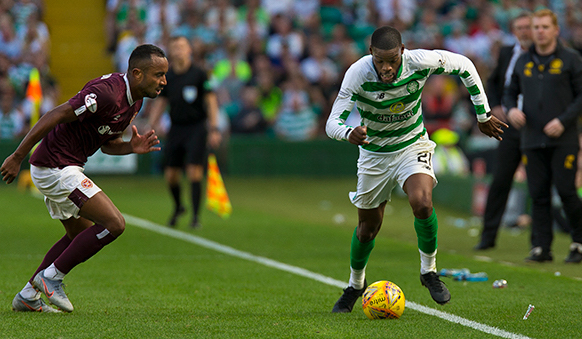 ON THE RUN…Olivier Ntcham, under the watchful gaze of Neil Lennon, sprints down the touchline.