AMID the drama of another eventful night in the east end of Glasgow, the spotlight, as expected, shone brightly on the fact Celtic had eased to TEN points clear at the top of the Premiership following a rollocking five-goal romp against Hearts.

Olivier Ntcham, Christopher Jullien, Callum McGregor, Ryan Christie and Jozo Simunovic shared the goals as the champions maintained their 100 per cent record in 2020 with eight victories out of eight.

The previous year, of course, did not end well with the team losing 2-1 to Steve Gerrard’s Ibrox outfit and there was a clamour for the Hoops hierarchy to splash massive amounts of cash in the transfer window to ensure the team were not derailed in the quest for nine in a row. Neil Lennon didn’t exactly go into overdrive with the club cheque book during the period.

He brought in Polish striker Patryk Klimala in a £3.5million deal and he spent another £2million on Ivorian midfield enforcer Ismaila Soro. Such is in the in-depth sterngthen of the Hoops’ first-team squad, despite Scott Sinclair moving to Preston and Lewis Morgan switching to David Beckham’s MLS side Inter Miami, neither of the new Bhoys could even get a place on the substitutes’ bench against the Tynecastle club.

And look at the quality of the three players who got the nod to join in the five-star performance – Christie, only on the pitch for three minutes before firing in the third goal, Mohamed Elyounoussi and Tom Rogic. Three current internationals with Scotland, Norway and Australia.

It augers well for the rigours that lie ahead on the domestic and European fronts.

Certainly, there was no sign of a hiccup against the Edinburgh strugglers on an evening that could prove so important when the main prize is being handed over in May.

CQN‘s ace lensmen were at Parkhead to capture the action. Here is the pick of the pics. 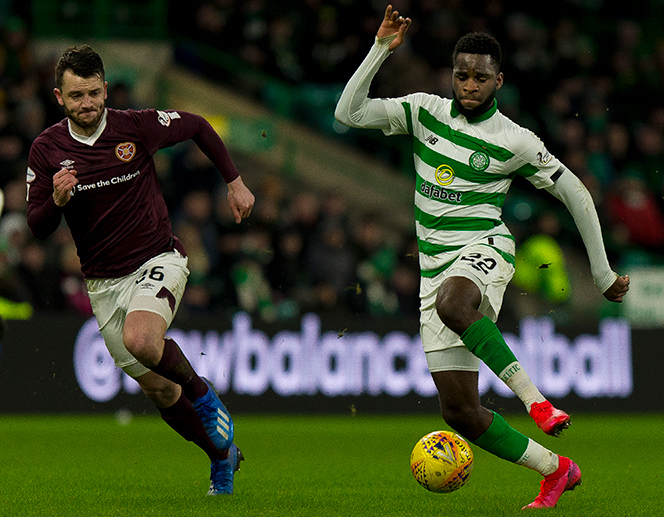 HANDS, KNEES AND BUMPS-A-DAISY…Odsonne Edouard goes through his repertoire to a bamboozled Craig Halkett. 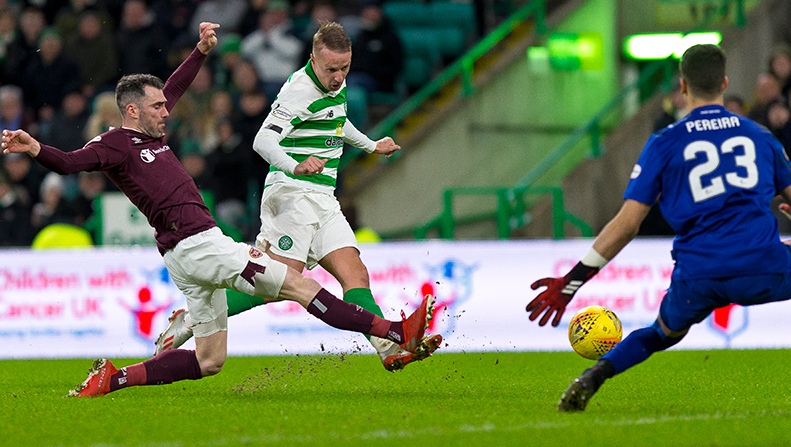 BY THE LEFT…Leigh Griffiths is out of luck on this occasion. 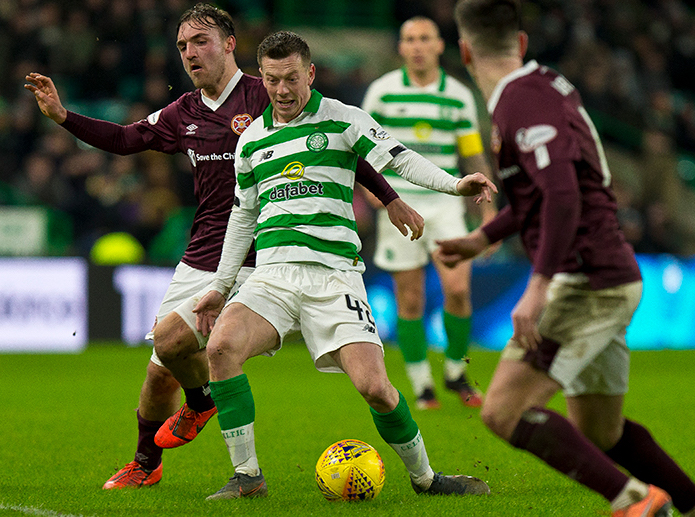 HAVING A BALL…Callum McGregor puts pressure on the Hearts defence. 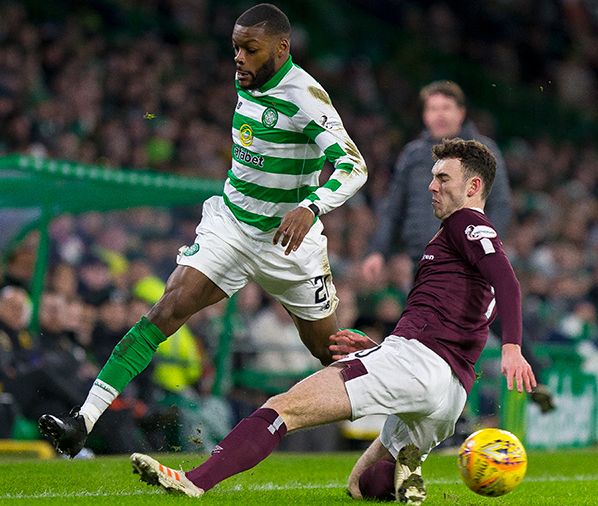 ON THE RUN…Olivier Ntcham displays his poise and elegance. 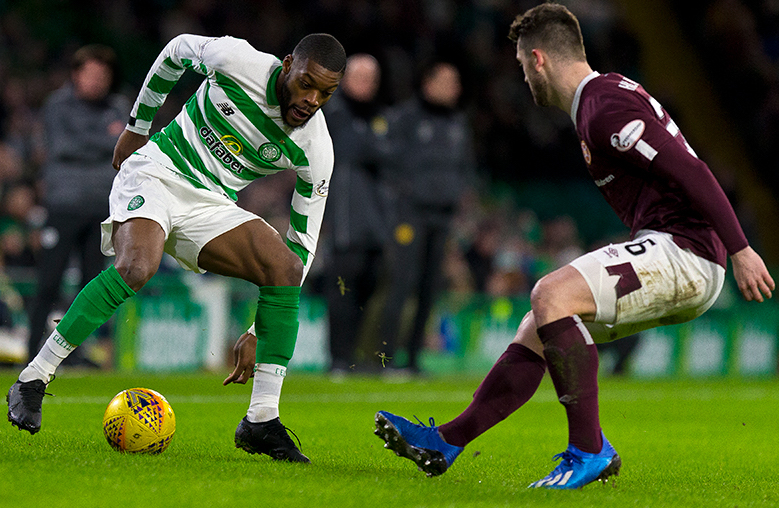 EYES ON THE PRIZE…Olivier Ntcham looks for an opening. 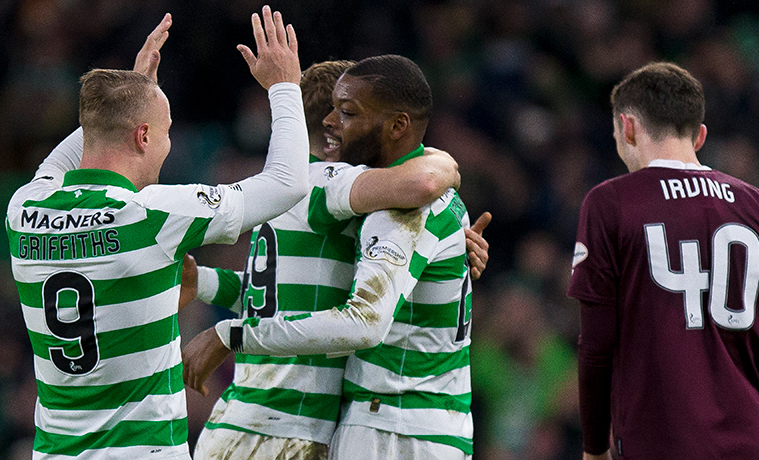 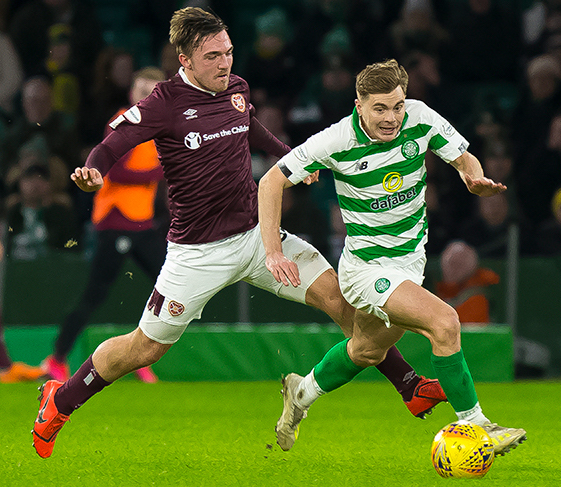 WIZARD OF THE WING…James Forrest weaves his way into the danger zone. 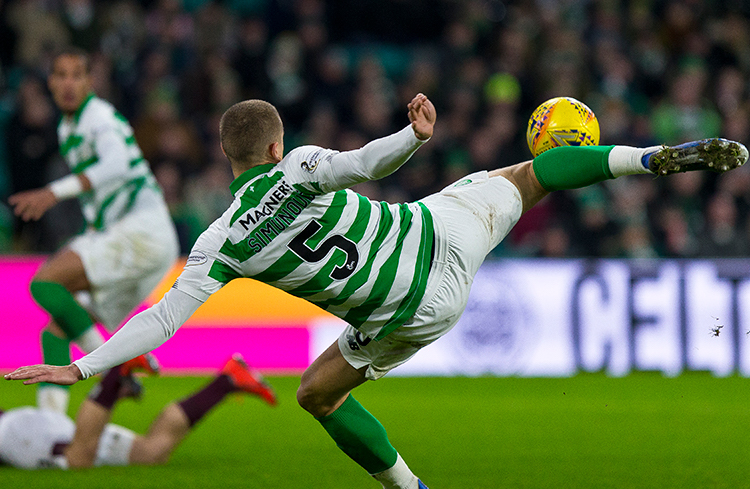 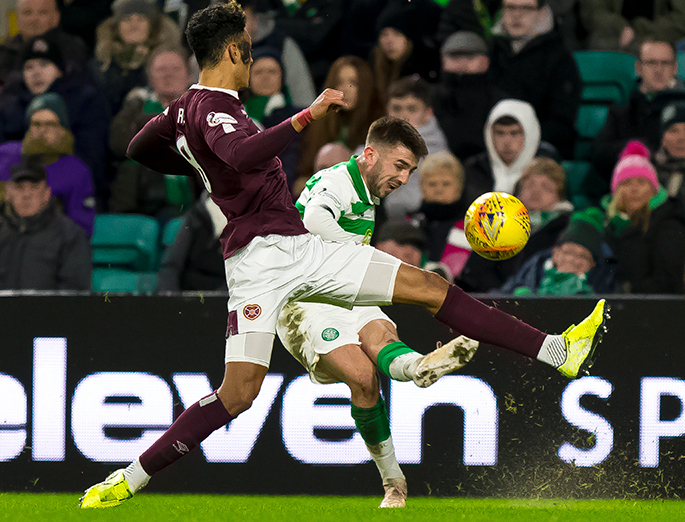 TOUCHLINE TERROR…Greg Taylor sweeps in a cross as Sean Clare is too late to intervene. 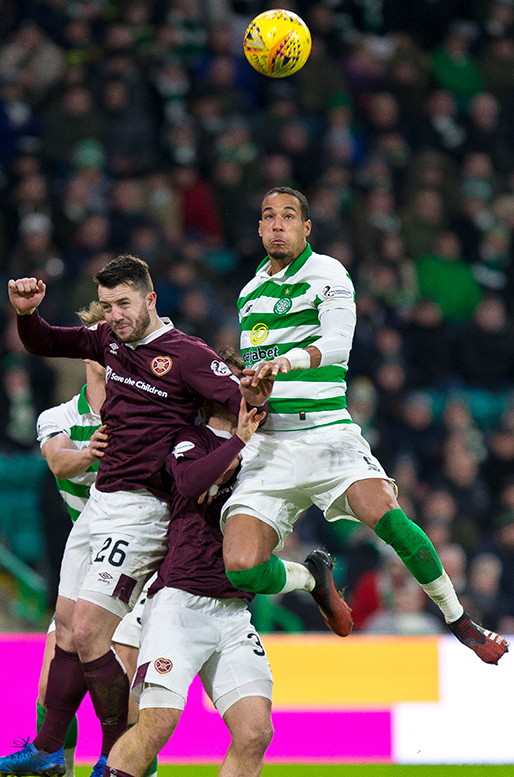 HIGH AND MIGHTY…Christopher Jullien is a towering menace as he outjumps the Hearts defence to a high ball. 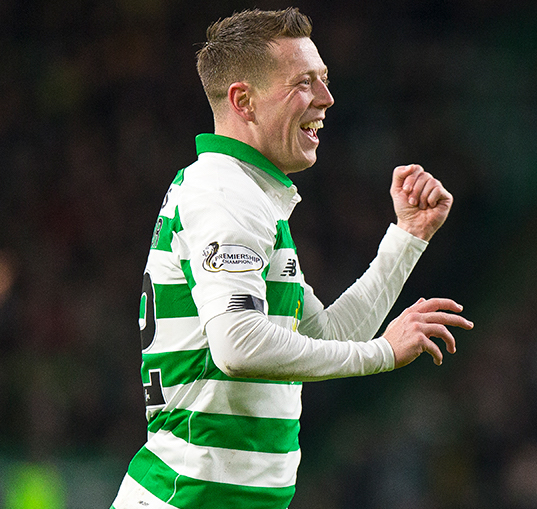 THREE AND EASY…Callum McGregor shows his joy after making it 3-0. 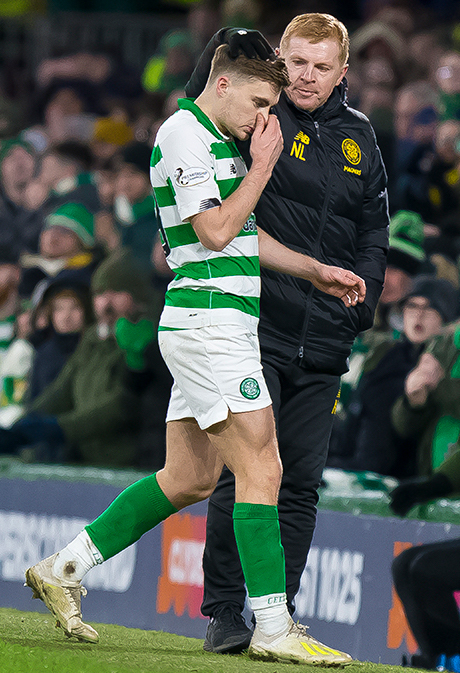 HEAD BHOY…James Forrest gets a pat on the napper by Neil Lennon as he earns a well-deserved rest. 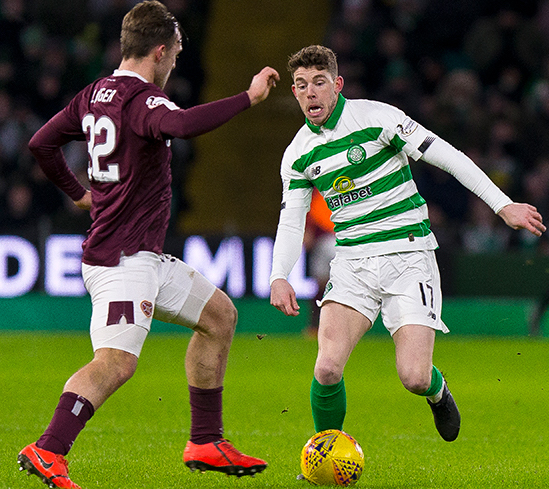 GRIM AND BARE IT…Ryan Christie prepares for a challenge from Marcel Langer who was later red-carded. 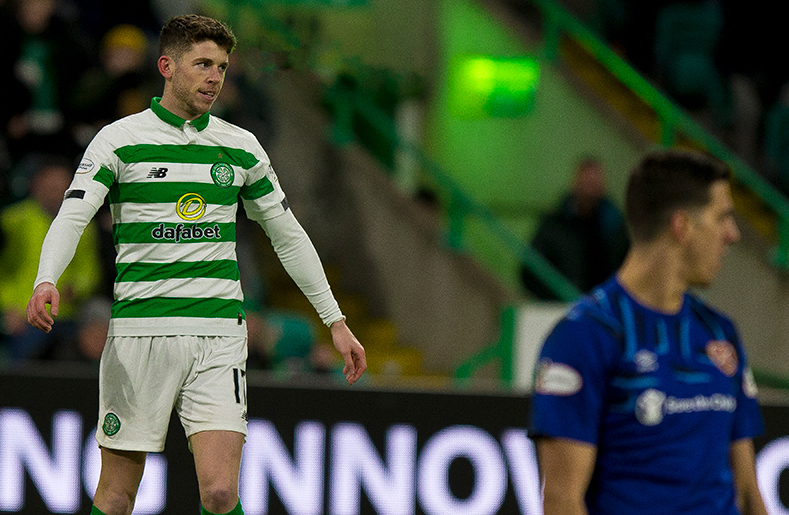 TO THE FOUR…Ryan Christie looks pleased as keeper Joel Pereira is beaten as the sub makes it 4-0. 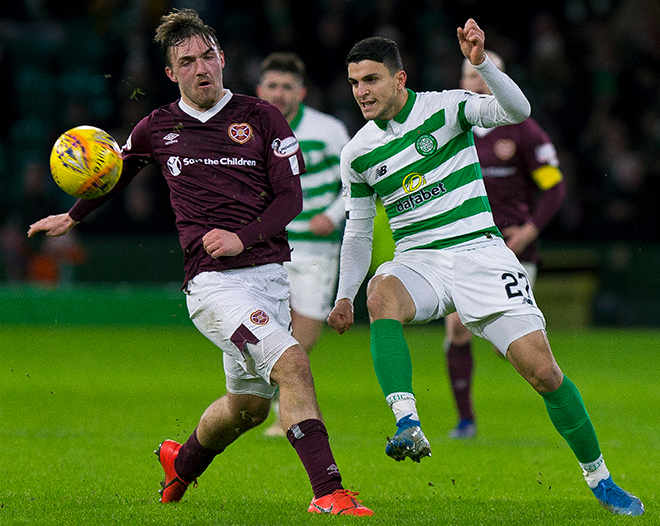 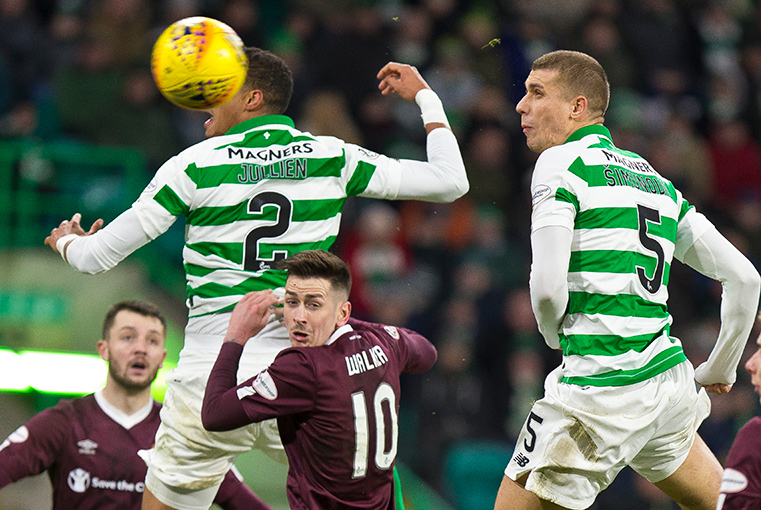 HEADS I WIN…Jozo Simunovic nods in No.5 with Christopher Jullien offering aerial assistance. 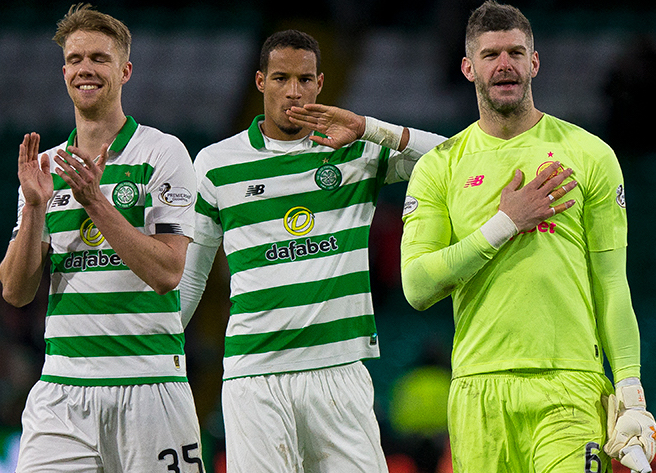