CELTIC brought down the curtain on 2021 by completing a hat-trick of wins over St Johnstone as Ange Postecoglou’s patched-up team overcame illness and injuries at McDiarmid Park.

The Hoops boss was forced to assemble a makeshift line-up for the visit to Perth with three crucial Premiership points up for grabs.

The rivals met for the first time at Parkhead on October 23 when strikes from £2.5million Greek hitman Giorgos Giakoumakis – his first and so far only goal for the club – and Josip Juranovic, from the penalty spot, delivered a 2-0 triumph.

Amazingly, only FIVE of the starting eleven that Saturday afternoon were on the field at kick-off yesterday. Cameron Carter-Vickers, Carl Starfelt, Josip Juranovic, Tom Rogic and Kyogo Furuhashi were the handful to get the nod from Postecoglou two months ago. 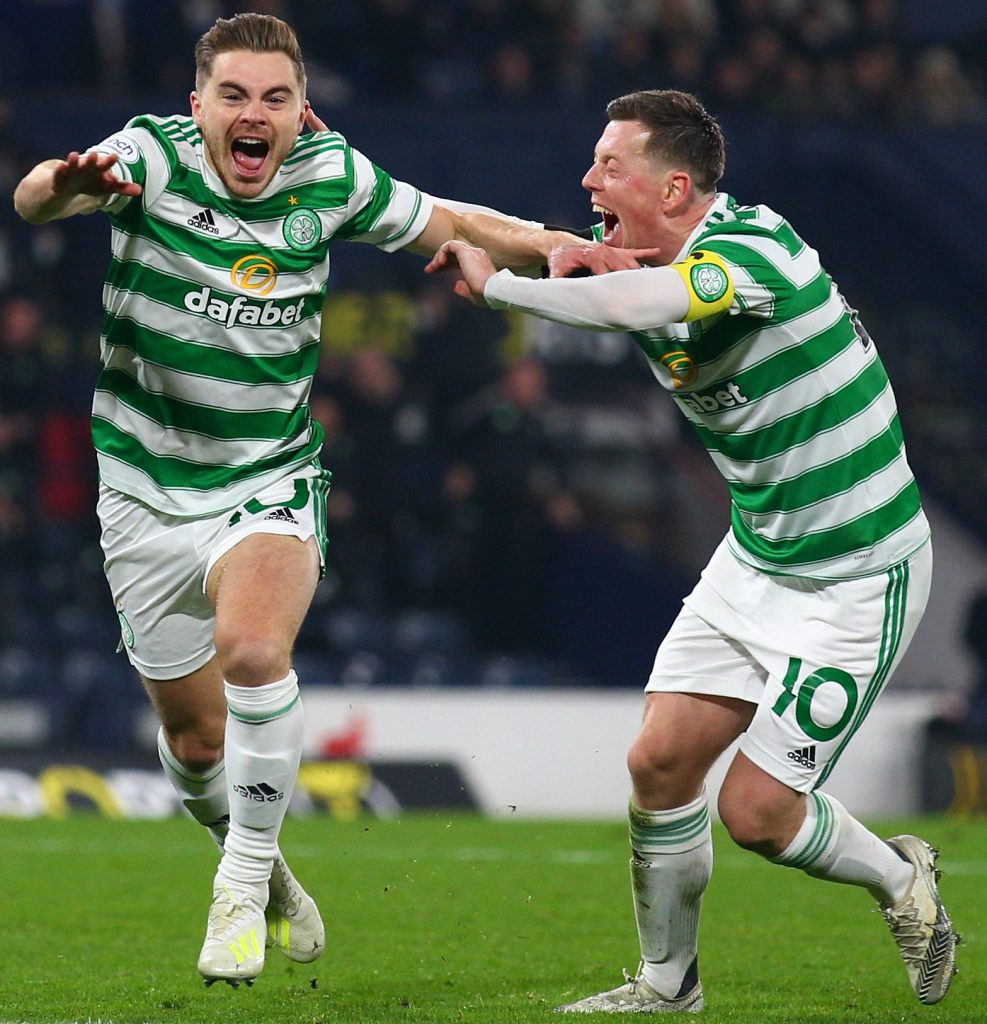 At Parkhead, Liel Abada, two-goal marksman in Perth, came on as a second-half substitute for Kyogo who lasted only 15 minutes this time around before making way for 18-year-old debutant Joey Dawson. Albian Ajeti and Mikey Johnston were also introduced  in the second-half in the east end of Glasgow.

Giakoumakis, of course, has been sidelined for several weeks with a knee injury although Postecoglou is hopeful of the former VVV-Venlo forward making a return early in the new year with the first game after the break being the visit of Hibs on January 17.

Celtic’s other victory over Callum Davidson’s side came in the Premier Sports League Cup semi-final last month when substitute James Forrest thumped in the only goal of the encounter.

The experienced winger was another Celt marked AWOL in Perth.

Postecoglou can only hope for better luck in 2022.

The Hoops stepped onto the Premiership tightrope again in Perth and CQN‘s ace snappers were there to capture the action. Here is the best of the best. 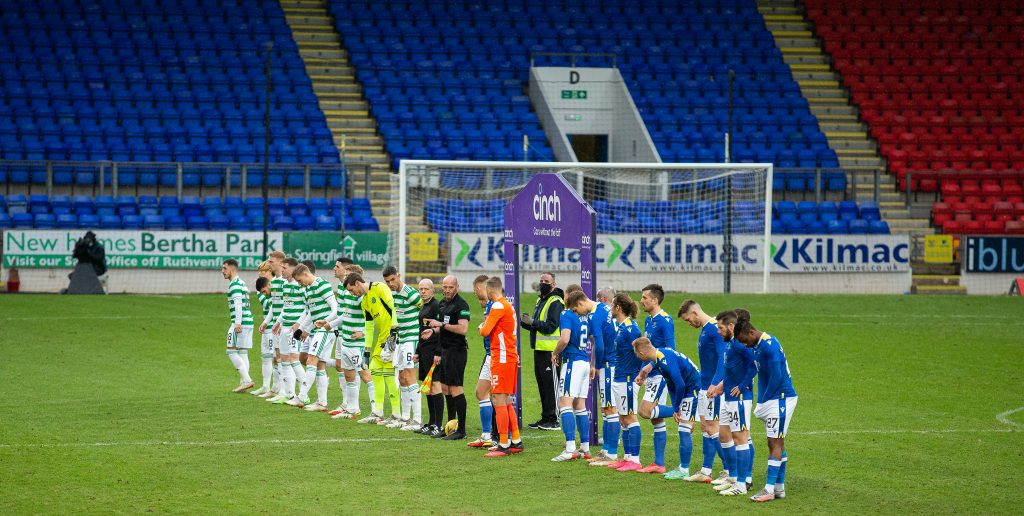 GHOST GROUND…Celtic and St Johnstone players line up before kick-off with the crowd at McDiarmid Park restricted to 500 fans. 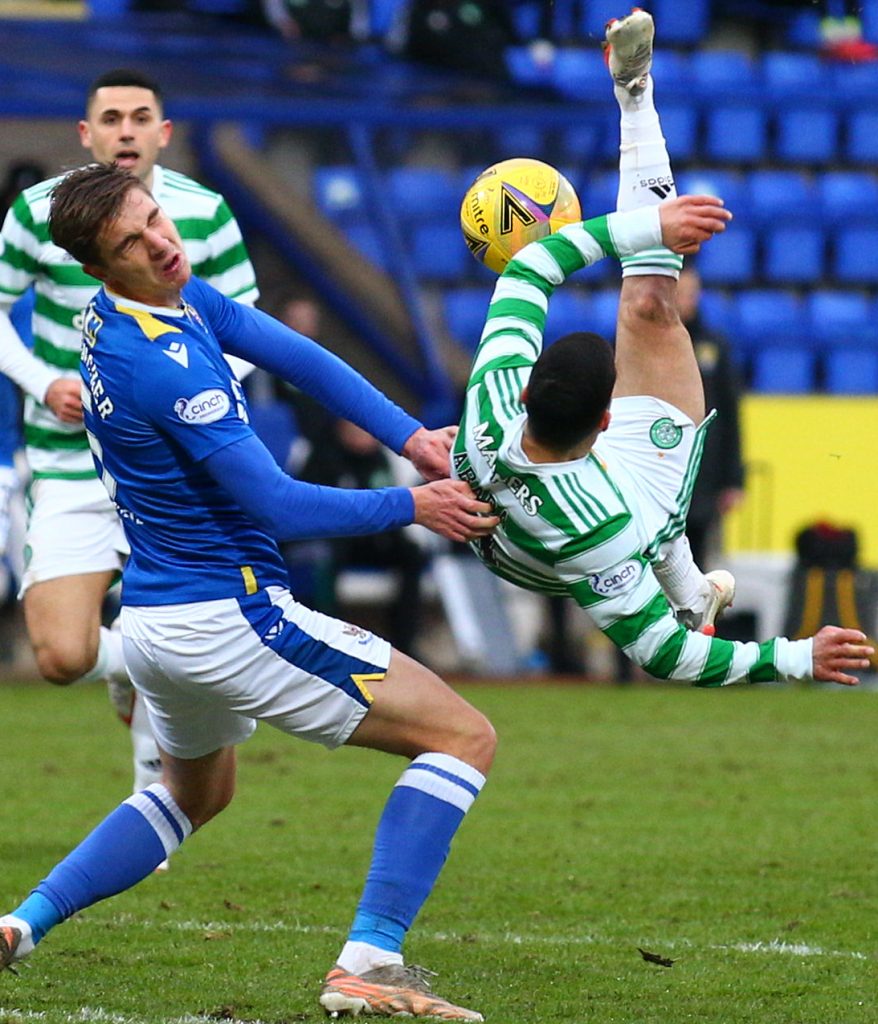 UP IN THE AIR…Liel Abada attempts an acrobatic overhead-kick with Tom Rogic looking on. 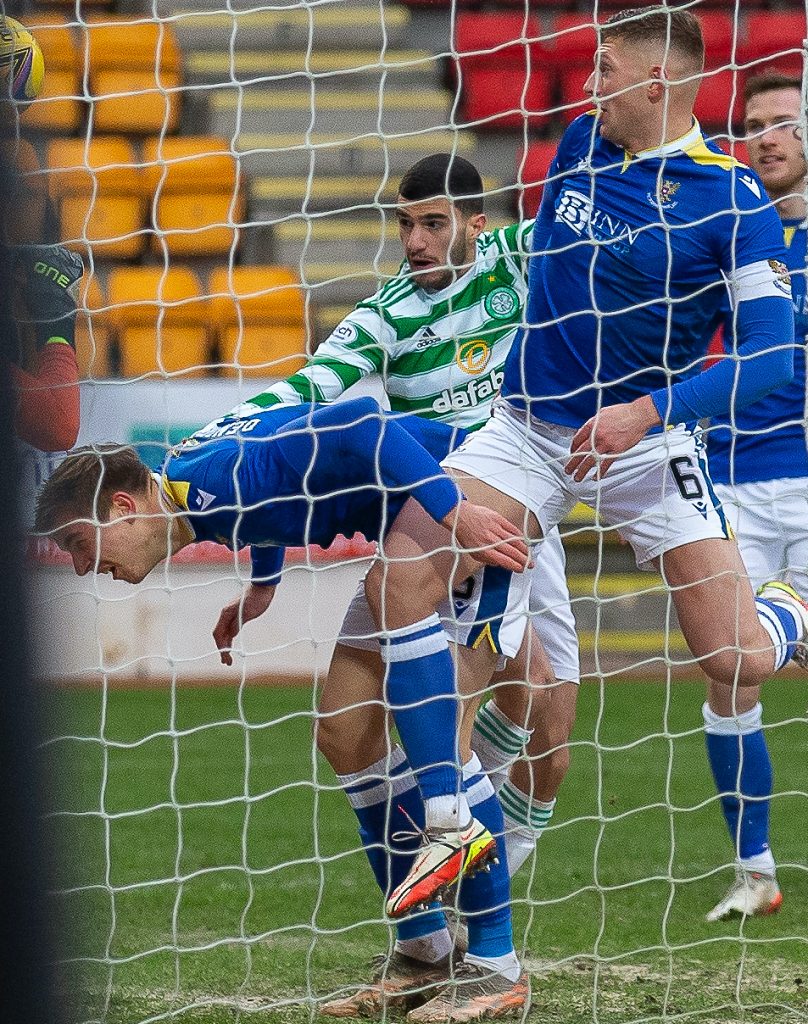 OUTNUMBERED…Liel Abada ignores the odds – and the St Johnstone defenders – as he forces in the Hoops’ opener.

AT THE DOUBLE…Liel Abada slots the second goal beyond Saints keeper Elliot Parish. 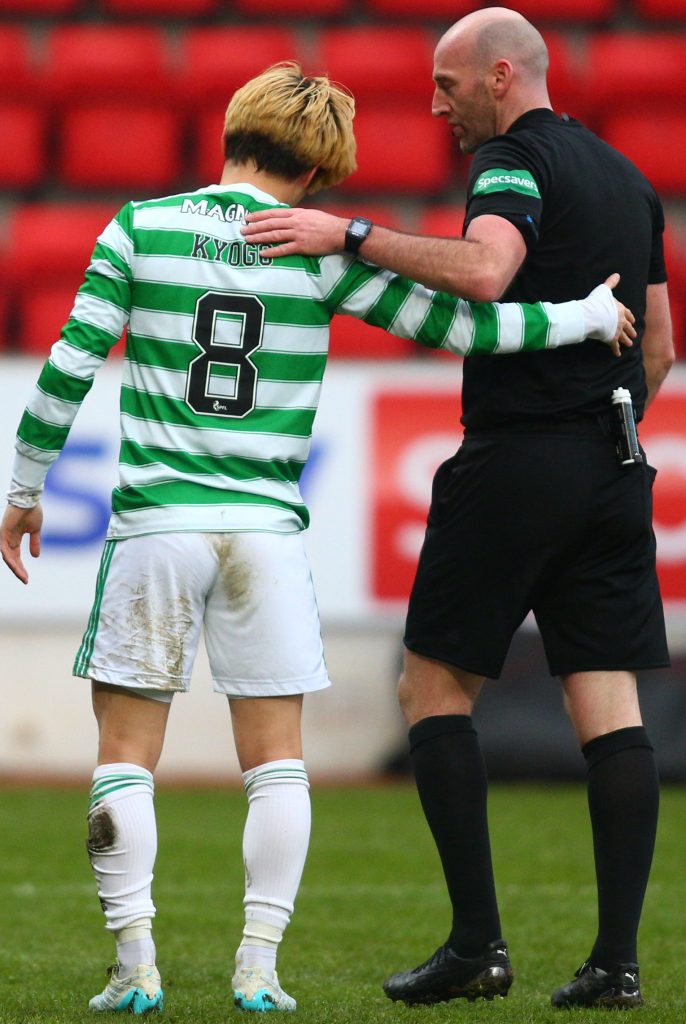 OFF…it’s game over for Kyogo Furuhashi as he is assisted by referee Bobby Madden. 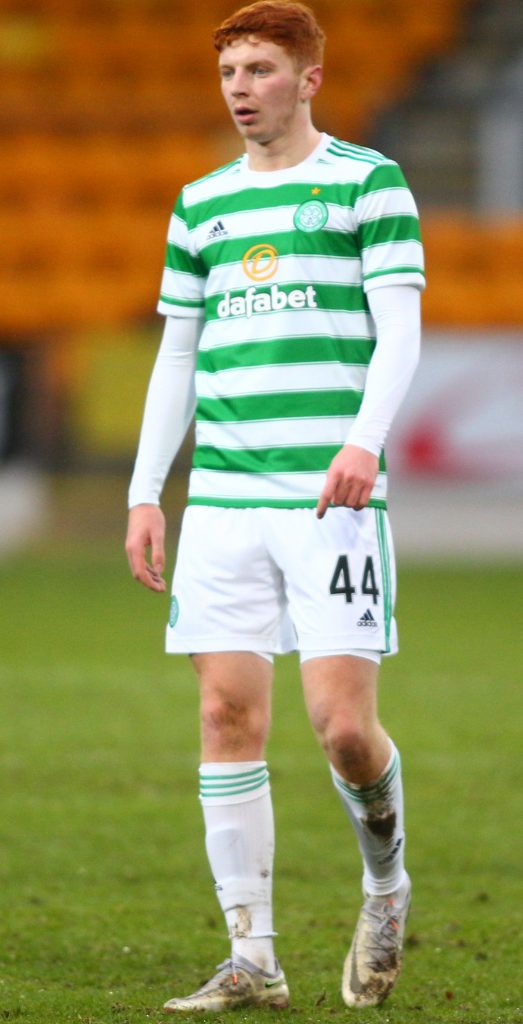 ON…18-year-old Joey Dawson makes his debut against the Saints. 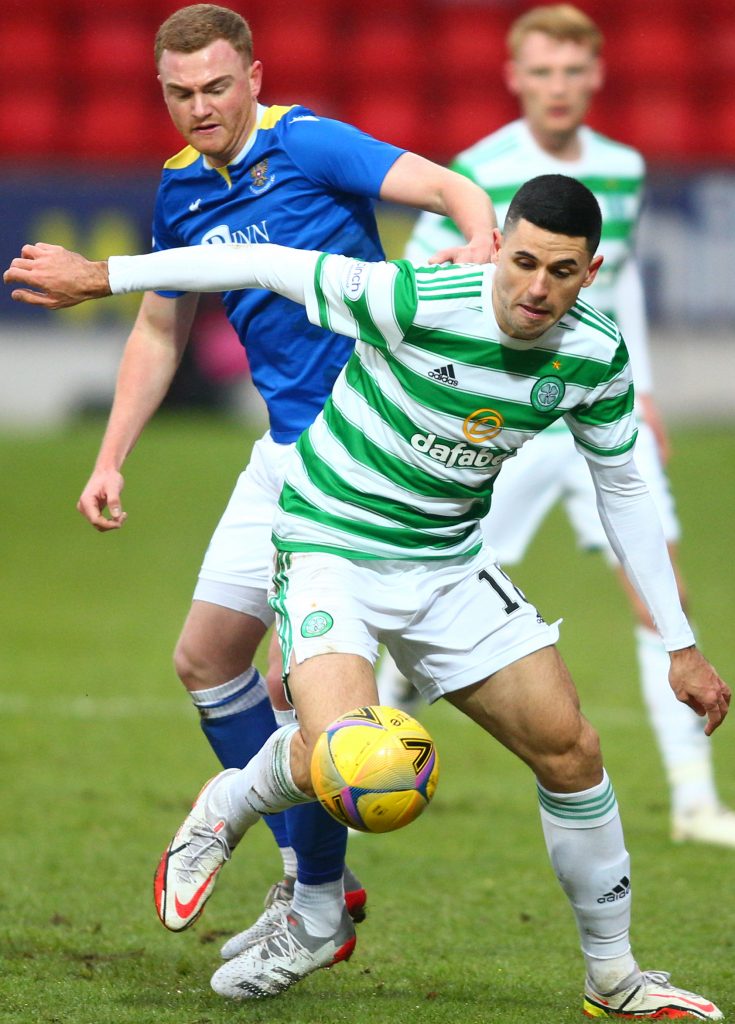 ON THE BALL…Tom Rogic races away from Perth defender James Brown.

HERE WE GO…Vasilis Barkas sets the ball in motion with team-mates Stephen Welsh, Liam Scales, Carl Starfelt and Cameron Carter-Vickers about to join in. 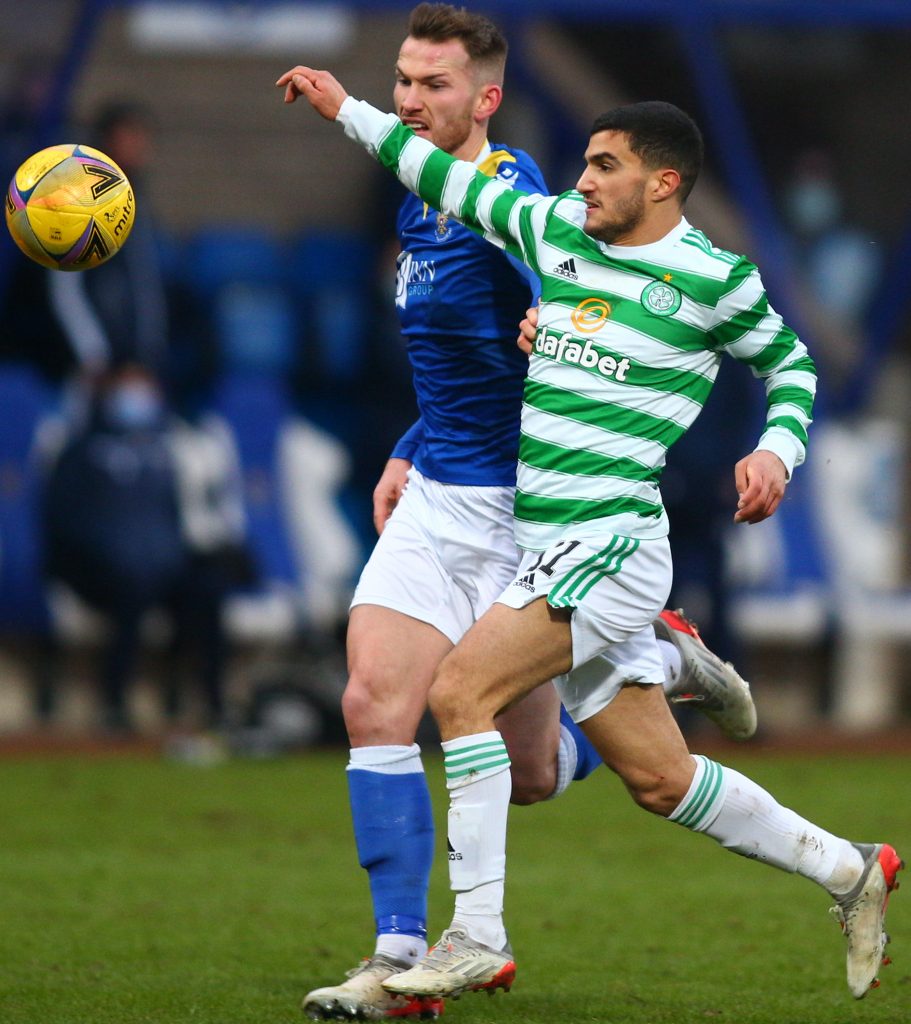 THE RACE IS ON…Liel Abada and Saints defender Jamie McCart in pursuit of the ball. 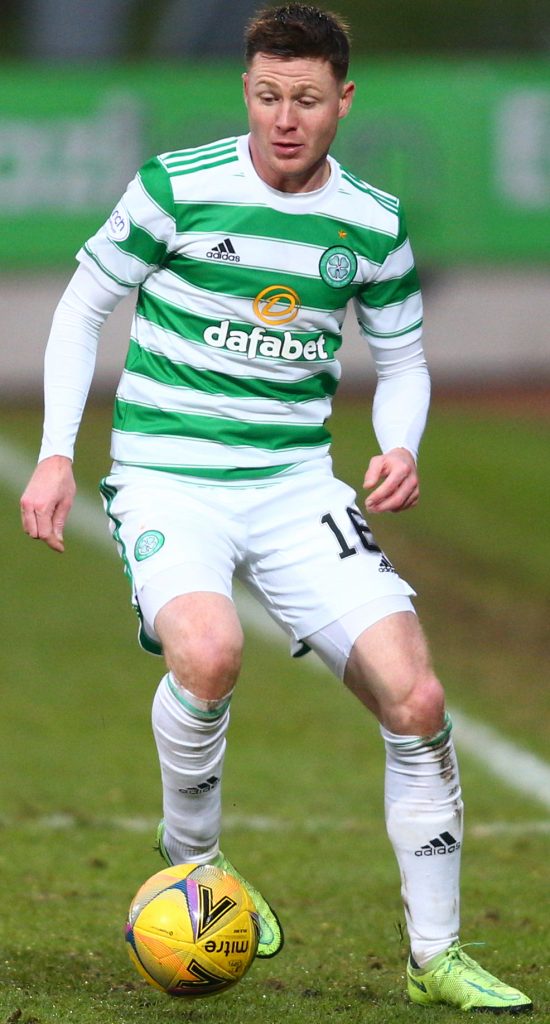 I’M IN CHARGE…James McCarthy is on the ball. 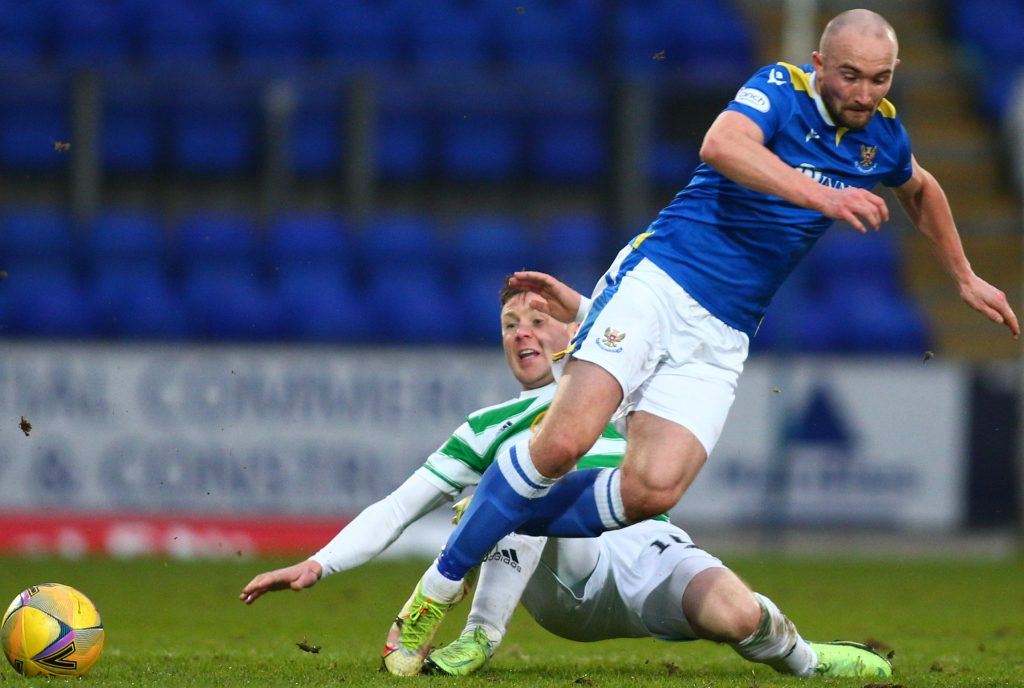 SLIDE IN TIME…James McCarthy dives in to rob Chris Kane of the ball. 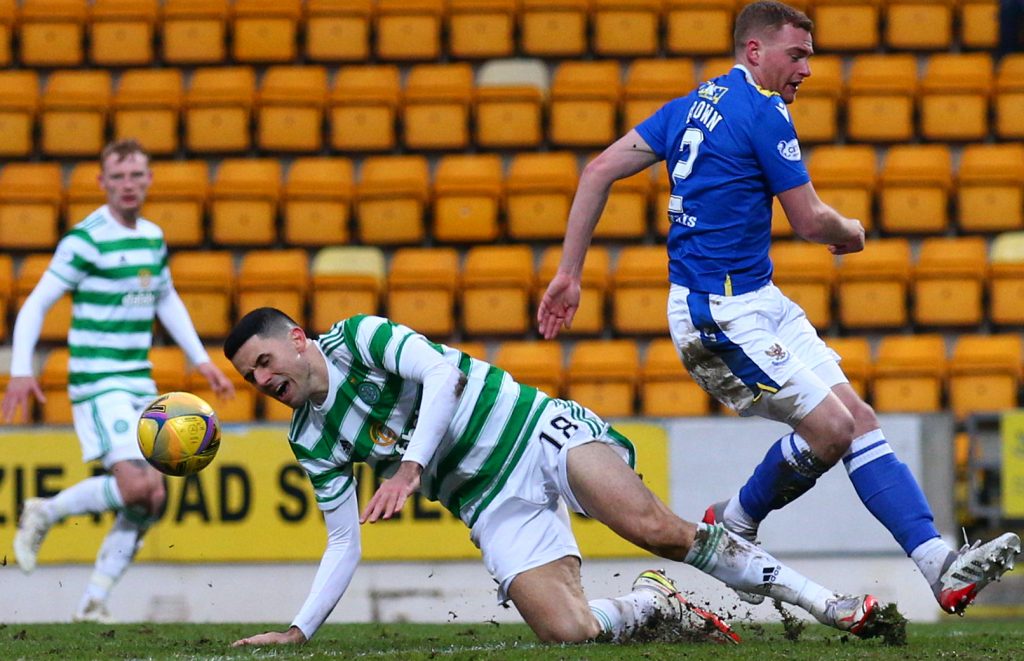 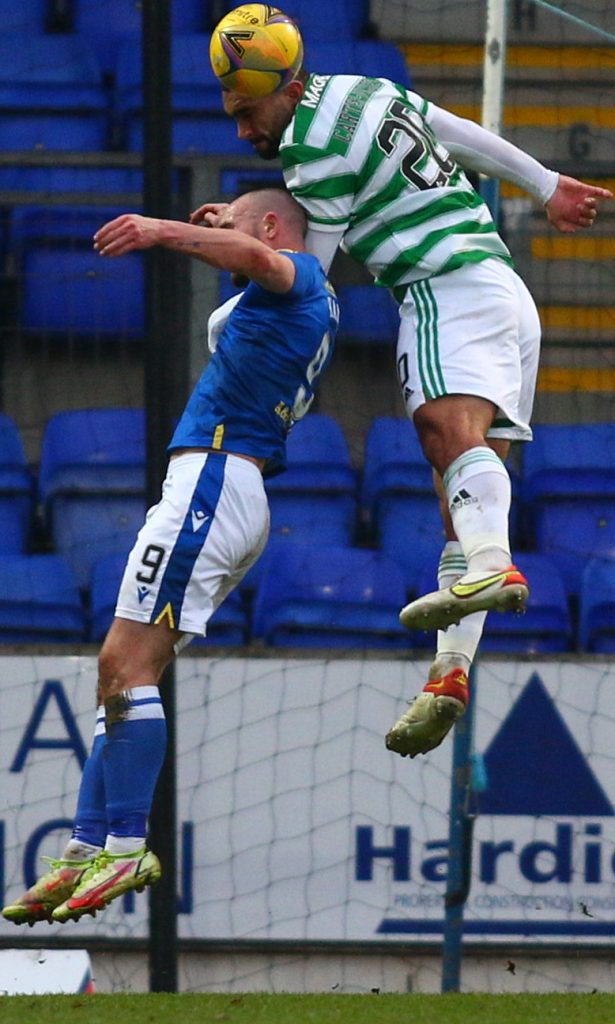 UP AND AT ‘EM…Cameron Carter-Vickers heads clear from Chris Kane. 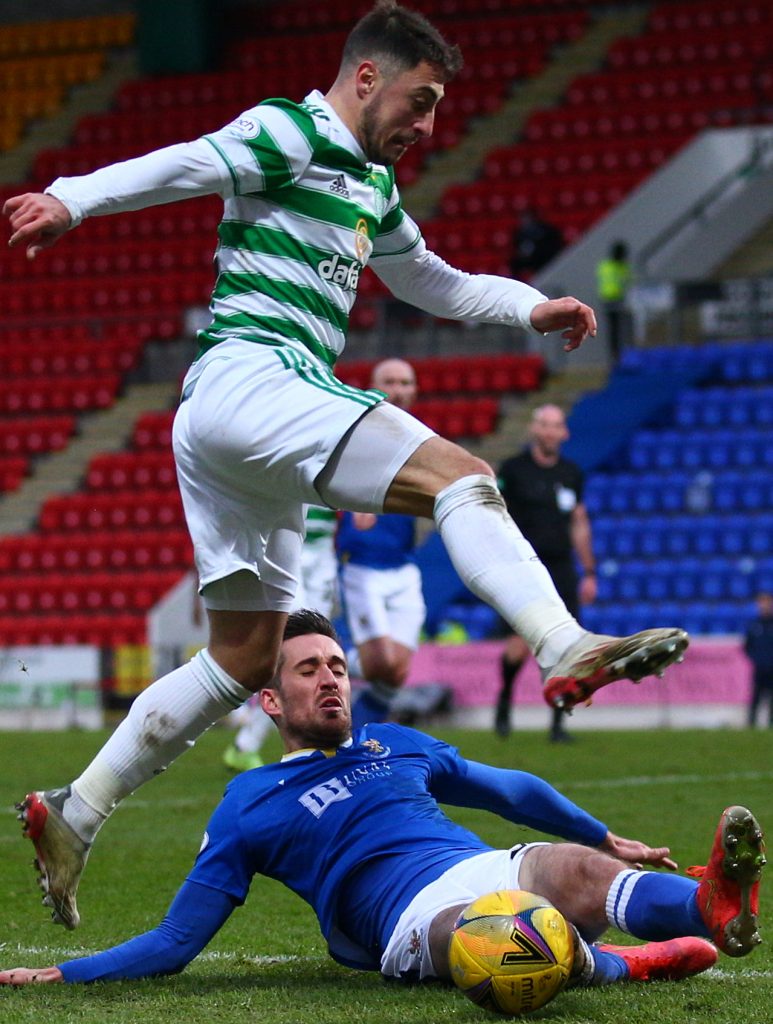 OVER THE TOP…Josip Juranovic hurdles a Saints challenge. 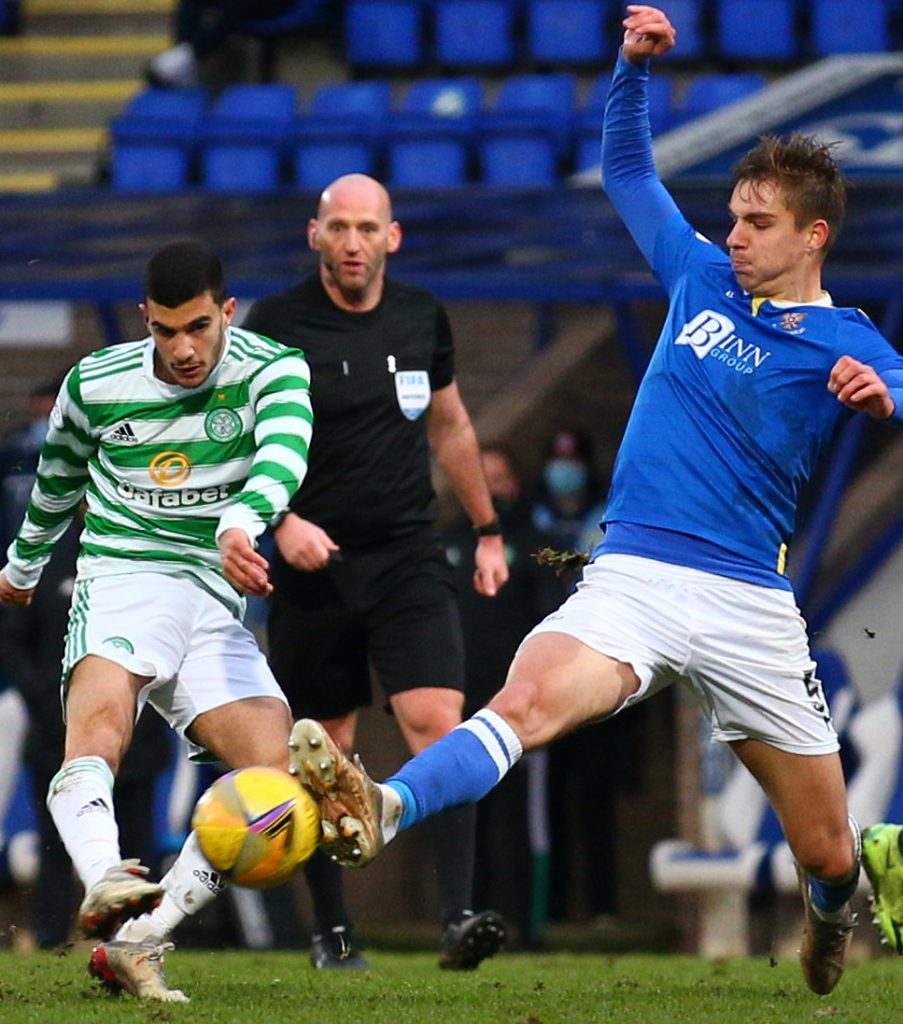 BY THE RIGHT…Liel Abada fires in an effort as he searches for his first Hoops hat-trick. 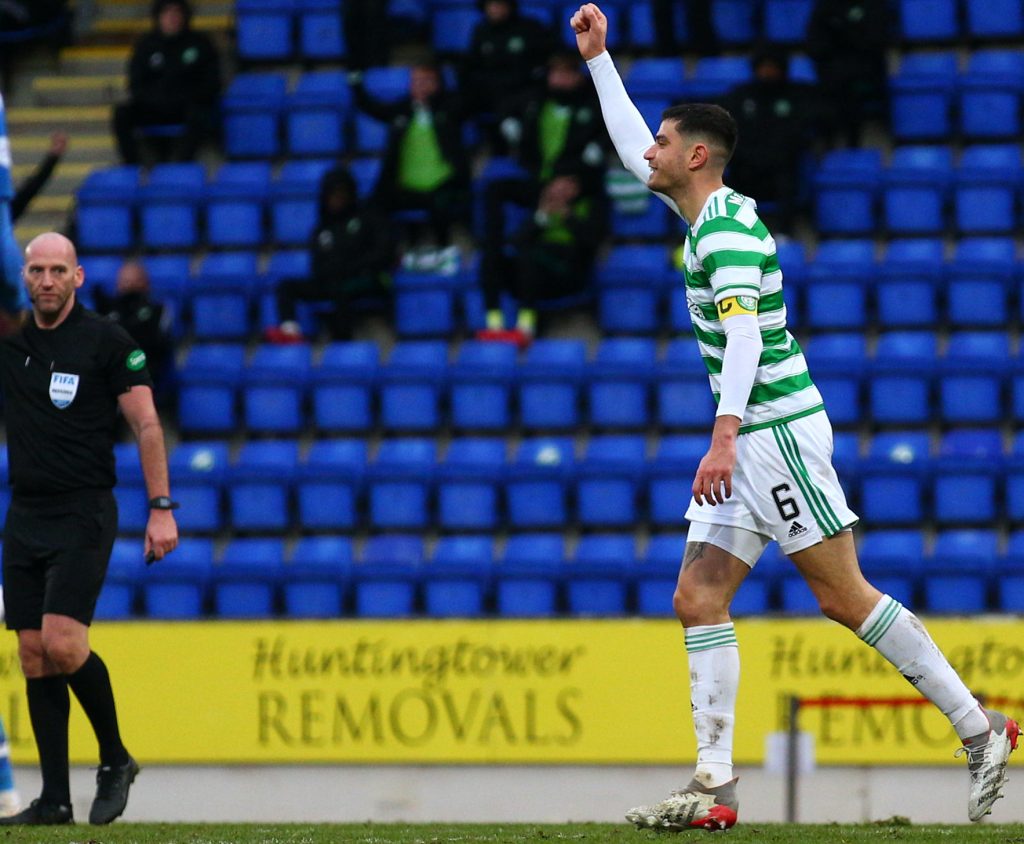 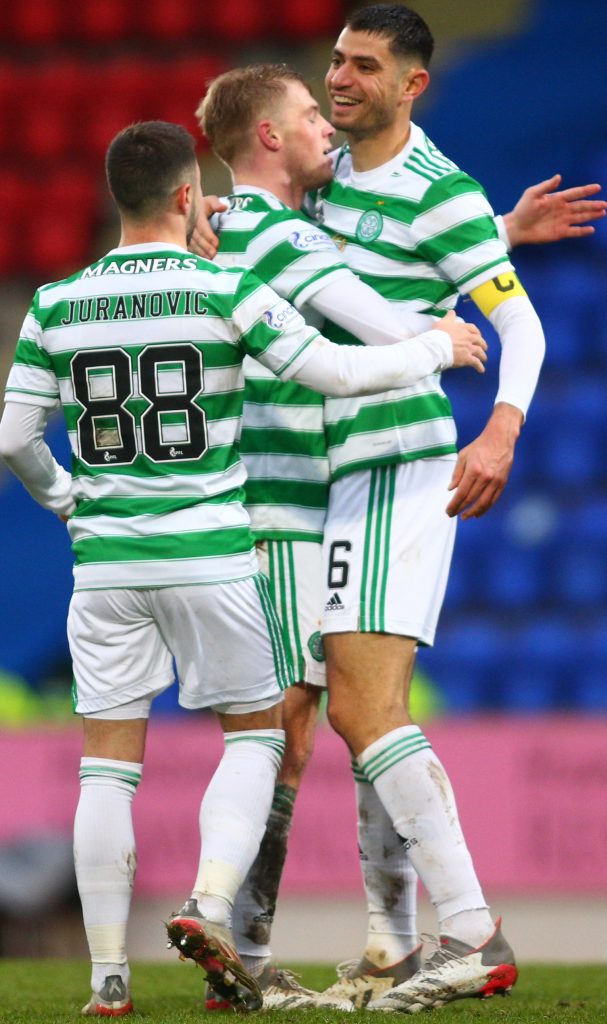 CELEBRATIONS…captain-for-the-day Nir Bitton is joined by joyous team-mates Stephen Welsh and Josip Juranovic following his strike for the third and final goal of 2021.