Celtic Quick News on News Now
You are at:Home»Football Matters»IN PRAISE OF CAESAR (NOT CESAR OR CAESER!)
By CQN Magazine on 5th October 2015 Football Matters

Check out the above video which shows STV’s Scotsport rounds up Celtic’s 1988 league win and discusses the overall season with Ian Archer and Jock Brown.

Please note the newspaper headlines and also the STV use of the word Caesar rather than Cesar. Also note rather confusingly that the video has been loaded to You Tube with the word spelt as Caeser!

Over the last year we’ve had plenty of feedback on our decision to name the CQN book Caesar & The Assassin rather than using Cesar. Ian Archer explains in this programme that Billy did get his nickname from the actor (Cesar) rather than the Emperor (Ceasar) but by the 1980s thinks had changed and Billy McNeill was clearly known as Ceasar. 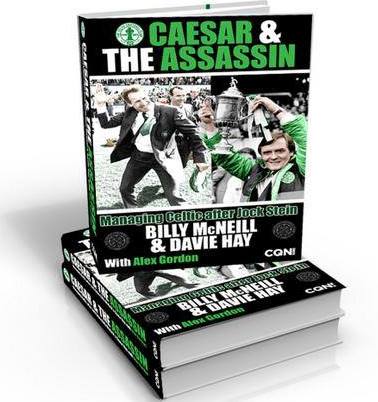 Alex Gordon explains at the start of  Caesar & The Assassin: ” Both Cesar, Billy’s original nickname, and Caesar, the one he prefers, are both correct. Jim Black decided to opt for the former whereas for this book I have gone with the latter as that is Billy’s preference. Who would argue with such a Celtic legend?”
Jim Black’s book was titled HAIL CESAR (Billy McNeill with Jim Black, Headline, 2004) and Celtic later used Cesar in a DVD release on the career of Billy McNeill.
But in the period covered in Caesar & The Assassin Billy McNeill was Caesar!
We have a very limited number of copies of Caesar & The Assassin remaining. If you would like to receive a copy please ORDER HERE or click on the cover image of Caesar & The Assassin.
Caesar & The Assassin has been a best seller for CQN Books. It tells the story of managing Celtic after Jock Stein and covers the period from 1978 to 1991, covering both of Caesar’s spells as Celtic manager with Davie Hay’s time in the hot-seat sandwiched in between.
The series continues shortly with follow up book, which is titled THE WINDS OF CHANGE. This book will be out at the beginning of November and covers the period 1991 -2004. In this period Celtic had 7 managers, not all of them magnificent!
Click Here for Comments >
Share. Twitter Facebook Google+ Pinterest LinkedIn Tumblr Email
Previous ArticleYou live in a land where “Accies against the Act” is a prohibited phrase
Next Article CELTIC STARS IN INTERNATIONAL EXIT