SCOTT BAIN is turning out to be one of Brendan Rodgers’ most astute pieces of business in the transfer market.

The 27-year-old goalkeeper joined Celtic on a free transfer from Dundee in the summer following an impressive short-term loan stint.

Bain has taken the gloves from Craig Gordon since the turn in the year and his shut-out in the 2-0 win over St Johnstone at McDiarmid Park yesterday was his fifth in succession in 2019.

He has kept out Airdrie, St Mirren, Hamilton Accies and the Perth outfit twice on the bounce, but the shotstopper’s record is even more startling when you look back to the start of the season. 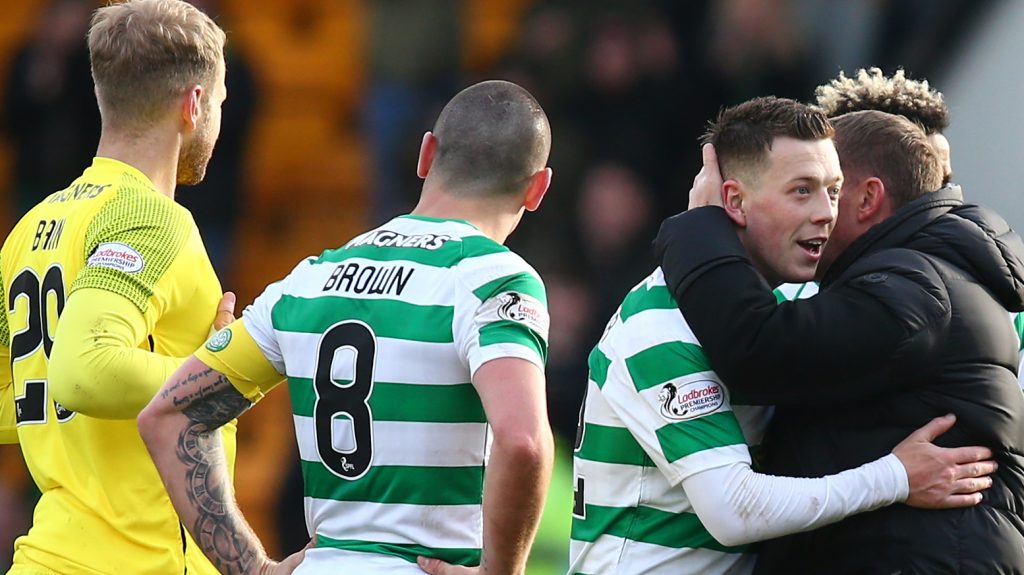 WAITING IN LINE…Scott Bain and Scott Brown are ready to be congratulated by boss Brendan Rodgers once he has complimented Callum McGregor following yesterday’s 2-0 win in Perth. Pic: Geo.

Bain conceded a 73rd-minute goal to Partick Thistle’s Andrea Mbuyi-Mutombo on August 18 in the Hoops’ 3-1 win in the opening Betfred League Cup-tie against the Championship outfit.

The Scotland squad goalie has played 10 times in all competitions – including the 1-0 League Cup Final win over Aberdeen in December – without conceding a goal. Including the 17 minutes after the Firhill game, that’s an amazing 917 minutes of defying the opposition.

With Hibs due at Parkhead on Wednesday evening, boss Rodgers now has a massive decision to make. Does he stick with Bain? Or does he recall Gordon?