Celtic Quick News on News Now
You are at:Home»Latest News»‘IT WAS ABOUT TIME HE SCORED AGAIN’, CELT SUMS UP GRIFF
By CQN Magazine on 20th January 2020 Latest News

LEIGH GRIFFITHS marked his first start in five months with the opening goal in the 2-1 Scottish Cup triumph over Partick Thistle at Firhill on Saturday night.

The 29-year-old marksman, with only three strikes since the start of the campaign, didn’t hesitate as he whipped a left-foot effort wide of the exposed Scott Fox for the opener in the 12th minute.

One player not surprised by Griffiths’ lethal touch in the Maryhill encounter was 19-year-old right-back Jeremie Frimpong, who also had an eventful 90 minutes.

The exciting Dutch right-back, speaking to The Scotsman, joked: “It was great to see him back and it was about time he scored again.

“It is so good to have him in the team again. I know how good he is playing against him in training every day.

“You just can’t give him a chance in the penalty box as he never misses. That is what happened with the opening goal. He has a terrific attitude and just never gives up. It was good to play alongside him.” 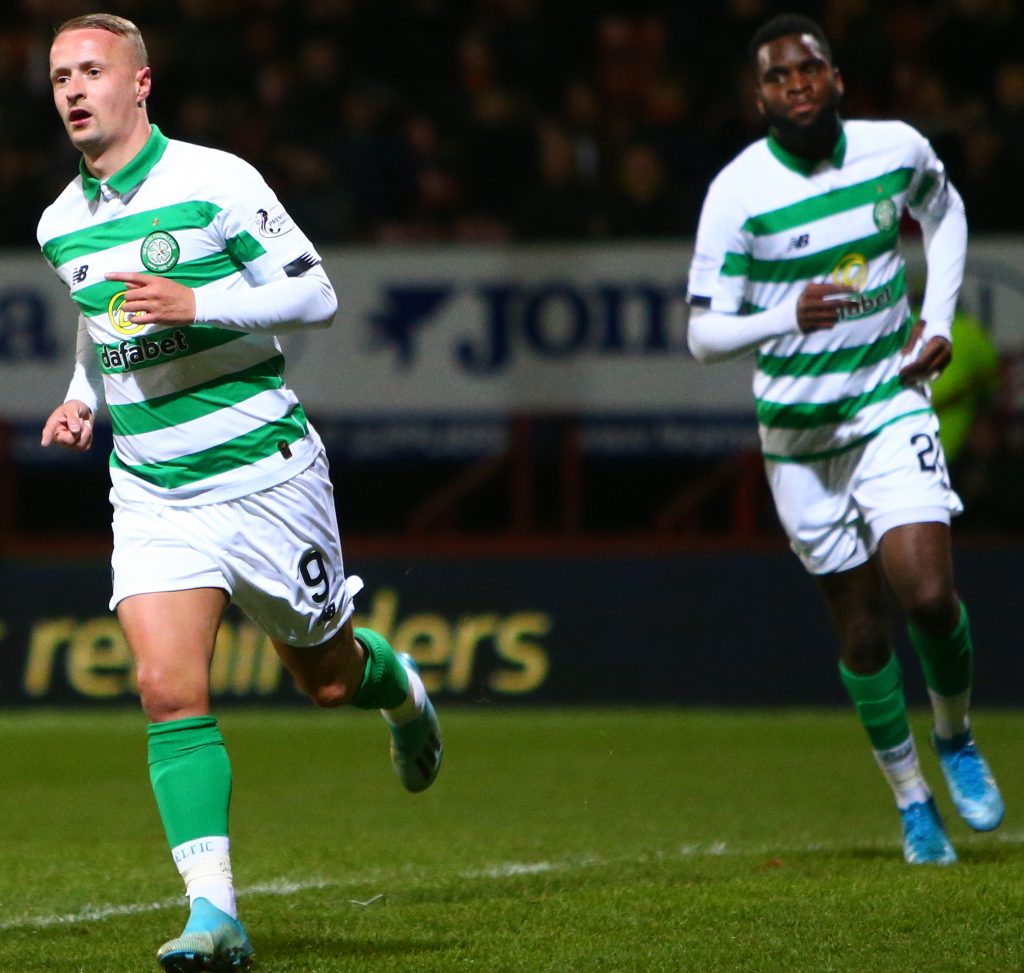 COMEBACK BHOY…Leigh Griffiths is about to be congratulated by Odsonne Edouard after his strike against Partick Thistle.

Griffiths’ last goal had come in the 5-2 win over Motherwell at Fir Park on August 10 which added to his earlier counters against Nomme Kalju, in the 5-0 triumph in the Champions League qualifier on July 24, and his whiplash effort in the 7-0 runaway success over St Johnstone on Flag Day at Parkhead on August 3.

The determined comeback hitman made his views clear about what his goal against the Championship side at the weekend meant to him, as CQN reported yesterday.

Neil Lennon showed faith in the player who has been beset by personal issues, injuries and loss of form and confidence in the past 13 months.

Griffiths lasted 80 minutes before being replaced by £3.5million Polish forward Patryk Klimala and it will now be interesting how the Hoops gaffer will set out his team against Kilmarnock at Rugby Park on Wednesday as the Premiership resumes.

Lennon, who will now face his namesake Danny when Celtic continue their Scottish Cup quest at Clyde next month, fielded the former Hibs man alongside Odsonne Edouard against the Jags and there were signs of a combination clicking into place between the pair.