Celtic Quick News on News Now
You are at:Home»Latest News»‘IT’S A DELIGHT FOR ME TO SIGN AND KEEP PLAYING FOR CELTIC,’ CHRISTIE
By CQN Magazine on 12th November 2018 Latest News

RYAN CHRISTIE expressed his joy at signing a new three-year deal with Celtic – only hours before joining up with the Scotland squad for the upcoming European Nations League games against Albania and Israel.

The Highlander, whose dad Charlie is a former Hoops player in Billy McNeill’s squad in the late eighties, admitted his excitement at the conclusion of recent talks with the club.

Brendan Rodgers had made it abundantly clear he wanted the 23-year-old playmaker, who has spent the last 18 months on loan at Aberdeen, to remain at the club. 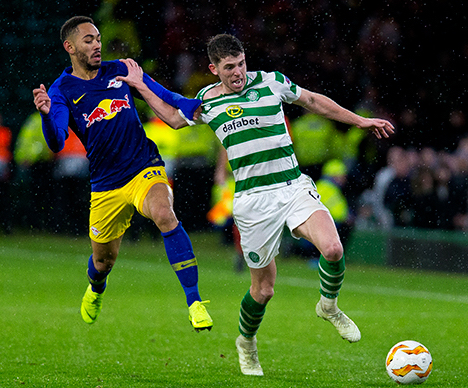 CATCH ME IF YOU CAN…Ryan Christie in the thick of the action against RB Leipzig.

Christie said: “I’m delighted. Ever since I started to play a bit more in the team, I’ve been happy to make an impact. Celtic is the club I want to continue playing for. It’s such a big club in Scottish football and it’s a delight for me to sign and keep playing for Celtic.

“I’ve enjoyed my football ever since I’ve come to the club. The manager’s been brilliant with me and I’ve really enjoyed playing under him and working with all the staff. I have a really positive feeling right now and I’m enjoying my football at Celtic.

“There’s no reason why I’d want that to change and I’m delighted looking at what’s ahead.

”I’ve really enjoyed coming in and I’ve taken a lot of confidence from that. It’s helping my game right now and I’m definitely looking to improve. I feel there’s plenty more to come for me which is a good thing. Hopefully, now I can kick on now and become a mainstay at Celtic.

“The fans have been brilliant. You’re always going to get that from Celtic fans. You put in a few good performances and the reception makes you feel like you’re on top of the world.” 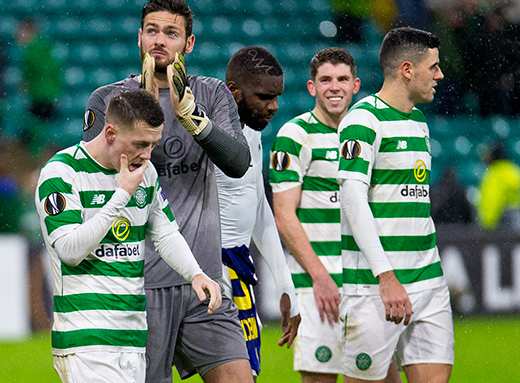 MEMORIES ARE MADE OF THIS…Ryan Christie beams his delight as he leaves the field with team-mates Callum McGregor, Craig Gordon, Odsonne Edouard and Tom Rogic following the 2-1 win over the Bundesliga outfit.

Christie added: “The game against Leipzig was the best atmosphere I’ve ever played in and this just tops off an amazing week for me. It was such a great night for everybody. It was my first true taste of a European night in a Celtic strip here and I absolutely loved it.

There had been speculation Dons boss Derek McInnes may make a move to get Christie on a pre-contract during  the January transfer window with the player’s contract due to expire in June next year.

The Pittodrie gaffer has never hidden his admiration for the skilful youngster who first made his name at Inverness Caley Thistle before his switch to Parkhead.

Now he is likely to get a close-up view of the new, improved Christie in the Betfred League Cup Final at Hampden on December 2 as the Hoops go for three in a row.

Before that, though, the Celt could be involved for his country in Saturday’s European tie in Albania and the match against Israel at the national stadium a week tomorrow.

Things aren’t dull for Ryan Christie at the moment!