OLIVER BURKE has repeated his passion for Celtic and his feelings for the fans as he prepares for the Europa League last-32 second leg against Valencia at the Mestalla on Thursday night.

The 21-year-old Scotland international attacker, who is on loan from West Brom until the end of the season, revealed he was “gutted” after last week’s first game when the team went down 2-0 to the Spaniards.

Burke, scorer of three goals since his arrival last month, said: “It is about pride. We have to go there and show we are capable and show what we can do.

“Fingers crossed, we can get a result and then see what happens.

“It was an amazing experience for me to play at Celtic Park in a big European game. It’s a privilege to be a Celtic player, with massive crowds and great fans.

“This is a huge stage for me. I really enjoyed it – for a while.

“It was pretty sad how it turned out and I was pretty down afterwards. It’s about picking yourselves up to go again.

“The boys are all really looking forward to going to the Mestalla. We will all get behind each other and, hopefully, we can kick on.”

However, Burke insisted the Hoops must up their game to be in with a chance against opposition who weathered the early storm in Glasgow to score crucial goals on either side of the interval to flatten Brendan Rodgers’ side. 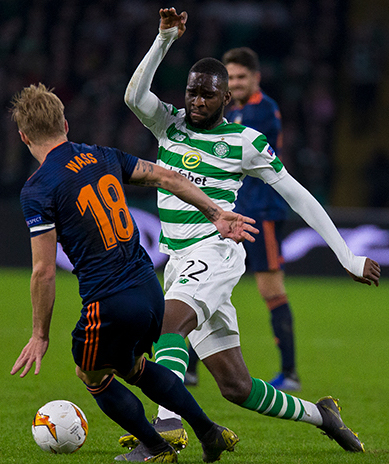 NO WAY THROUGH…Odsonne Edouard tries to get past Valencia defender Daniel Wass.

He added: “It was a really tough night. I was gutted, really. Credit to them, they are a good side and they played very well.

“But we know can do much better than the other night. It was so disappointing, but we need to focus on the return.

“The quality is a lot better. They move the ball really well, their organisation is very good, they shifted us and moved us very well. They pressed us and their formation really worked.

“I am sure we can improve, though. We showed signs we can penetrate and get in behind them.

“We created a couple of chances and, hopefully, this time we can get a bit closer and stick a few of them in the back of the net.”

Burke limbered up for the European encounter when he came on for the toiling Odsonne Edouard as a 68th-minute substitute in Sunday’s dramatic 1-0 triumph over Kilmarnock at Rugby Park.

His blistering pace helped to turn the game around as the champions moved eight points clear at the top of the Premiership with the club’s eighth successive title well in sight.

Europe, alas, could be a step too far for Burke and his team-mates on this occasion – unless they can pull off a miracle in the Mestalla.