CELTIC are six points ahead at the Premiership pinnacle and NINETEEN goals better off than their nearest challengers after the weekend round of league action.

The Hoops, of course, were unstoppable as they pulverised St Johnstone 7-0 at Parkhead yesterday with Matt O’Riley claiming a double while Reo Hatate, Giorgos Giakoumakis, Daizen Maeda, Josip Juranovic (pen) and Liel Abada fired in the others.

Kemar Roofe scored with a header inside two minutes and he doubled the advantage in first-half stoppage-time. The striker claimed his hat-trick shortly after the turnaround and Joe Aribo hit the fourth. 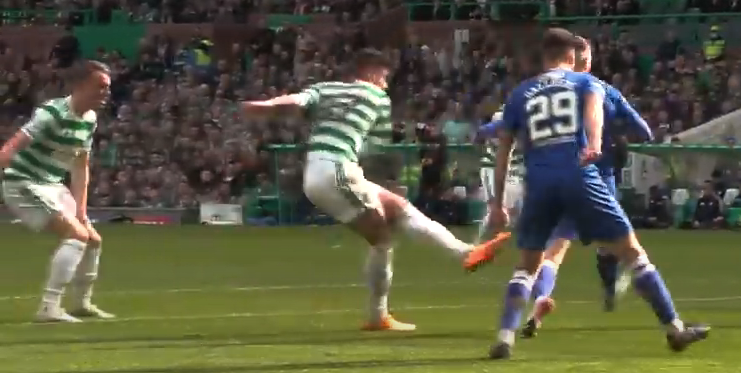 WALLOP…Matt O’Riley, watched by David Turnbull, swivels before firing in a brilliant sixth goal for Celtic against St Johnstone. 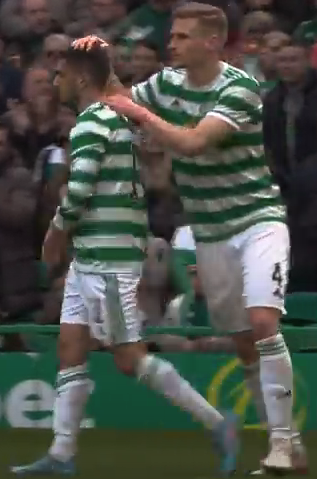 It wasn’t all plain sailing, though, for the Govan side who saw midfielder John Lundstram and centre-back Filip Helander limp off with injuries that could make them doubtful for next Sunday’s Scottish Cup semi-final at Hampden against Celtic who have won the previous two Glasgow derbies, 3-0 in the east end of Glasgow in February and 2-1 at Ibrox last weekend.

Now Postecoglou and his players are waiting for the definitive announcement of the remaining five fixtures following the SPFL split.

The Hoops are due to play three at home, including a visit from the Ibrox outfit.

Also through to the top six are Hearts, who beat Shaun Maloney’s Hibs 3-1, Dundee United, who drew 2-2 with their city rivals, Ross County, who dumped Aberdeen 1-0 at Pittodrie, and Motherwell who snatched a late 2-2 draw at Livingston.