Celtic Quick News on News Now
You are at:Home»Latest News»‘IT’S ALL ABOUT CELTIC,’ KT
By CQN Magazine on 18th April 2018 Latest News

KIERAN TIERNEY has dismissed speculation linking him with Manchester United and a host of other big-money clubs to concentrate on helping Celtic to a historic double treble.

The Scotland international left-back, 20, penned a bumper new six-year deal this season and has set his sights on sealing the Premiership for the seventh successive campaign against Hibs at Easter Road on Saturday.

And then Tierney will turn his attention to lifting to Motherwell in the Scottish Cup Final at Hampden on May 19.

He said: “I’m not thinking about anyone other than Celtic.

“I’m enjoying my career here. I’ve just signed a six-year deal, so if that doesn’t say long term I don’t know what does.

“A double treble has never been done for a reason – it’s very hard. We’ve put ourselves in a great position and it’s up to us to be 100 per cent and do the business now.”

Tierney insisted he hasn’t been watching reruns the weekend 4-0 drubbing of Graeme Murty’s Ibrox strugglers, but admitted: “My dad goes over the games, but I don’t. We will analyse it in training and John Kennedy will go over the good and bad bits with me.

“Sunday was one for the memories, definitely. Looking back in years to come it will be a great memory, but we still have big games to look forward to and can’t dwell on this too long.” 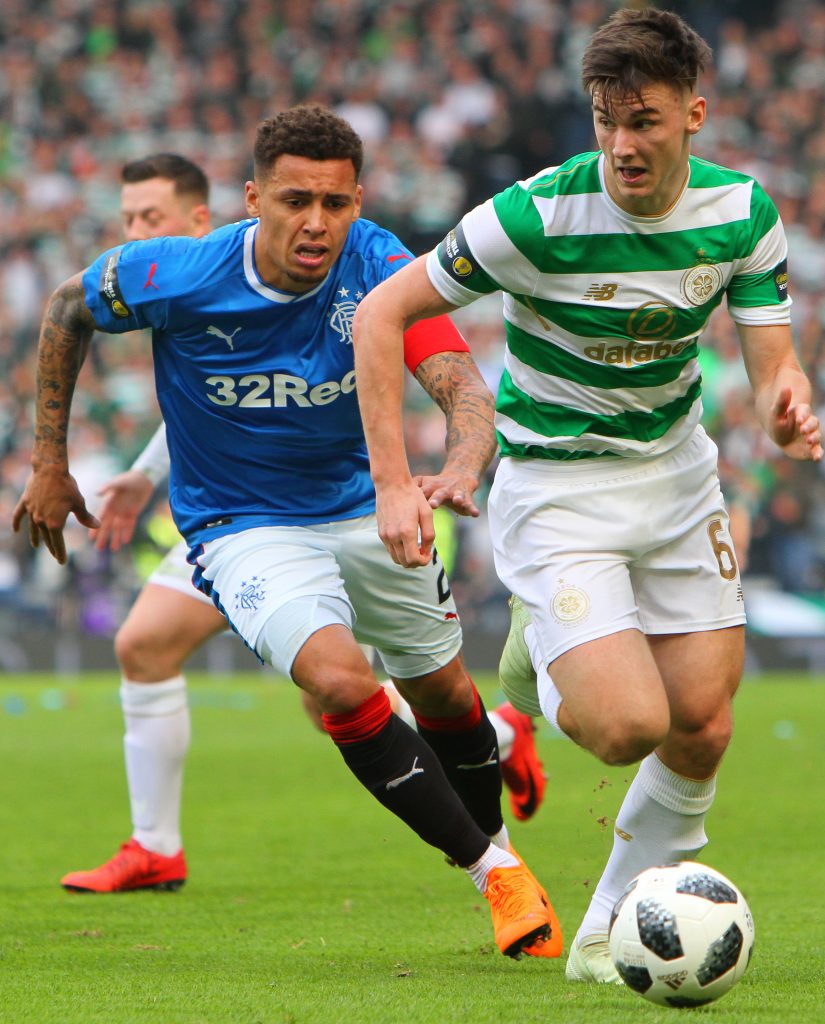 THE CHASE IS ON…Kieran Tierney gives James Tavernier the slip at Hampden.

Tierney – who has played in nine of Celts’ 10-match run without a loss against their Glasgow neighbours – said: “It can help when you are unbeaten in these games for a while, but it also builds up pressure with a lot of people saying you need to lose one time.

“It doesn’t matter the score. All that matters is winning these games. You saw the last time at Ibrox, down to 10 men and winning was a great feeling.

“To win by four in a high pressure semi-final just shows you how hard we are working.

“After the games there’s no better feeling. It’s surreal when you walk around the stadium at full-time and see the smiles on everyone’s faces. It doesn’t get better than that.

“It was brilliant – from first minute to last we were the better team and showed we wanted it.

“It was a great result. The games are tough, but what we do in training and what we showed on the pitch gives us the best chance of a win. We were clinical – when we got chances we took them.

“We have players who can change the game seemingly out of nothing. All they need is a half chance.

“You see Moussa Dembele’s willingness to work and run and earn penalties then show great composure. James Forrest chips in, too, and we have a solid defence.

“You can look at our bench and see who came on and who didn’t. We have great players who can make a difference and that’s what makes us a good team.

“You know if you’re not performing then someone else can come in and that spurs you on.”