ONE flash of genius and a sublime finish put Celtic on their way to Betfred League Cup success against Motherwell at Hampden this afternoon.

The game was goalless at the interval with the holders rarely troubling keeper Trevor Carson as they appeared to play with the hand brake on against willing, hard-working opponents.

However, only four minutes after the turnaround, James Forrest sprinkled some stardust on the occasion and Brendan Rodgers was on his way to his fourth trophy in 18 months as the champions’ manager. 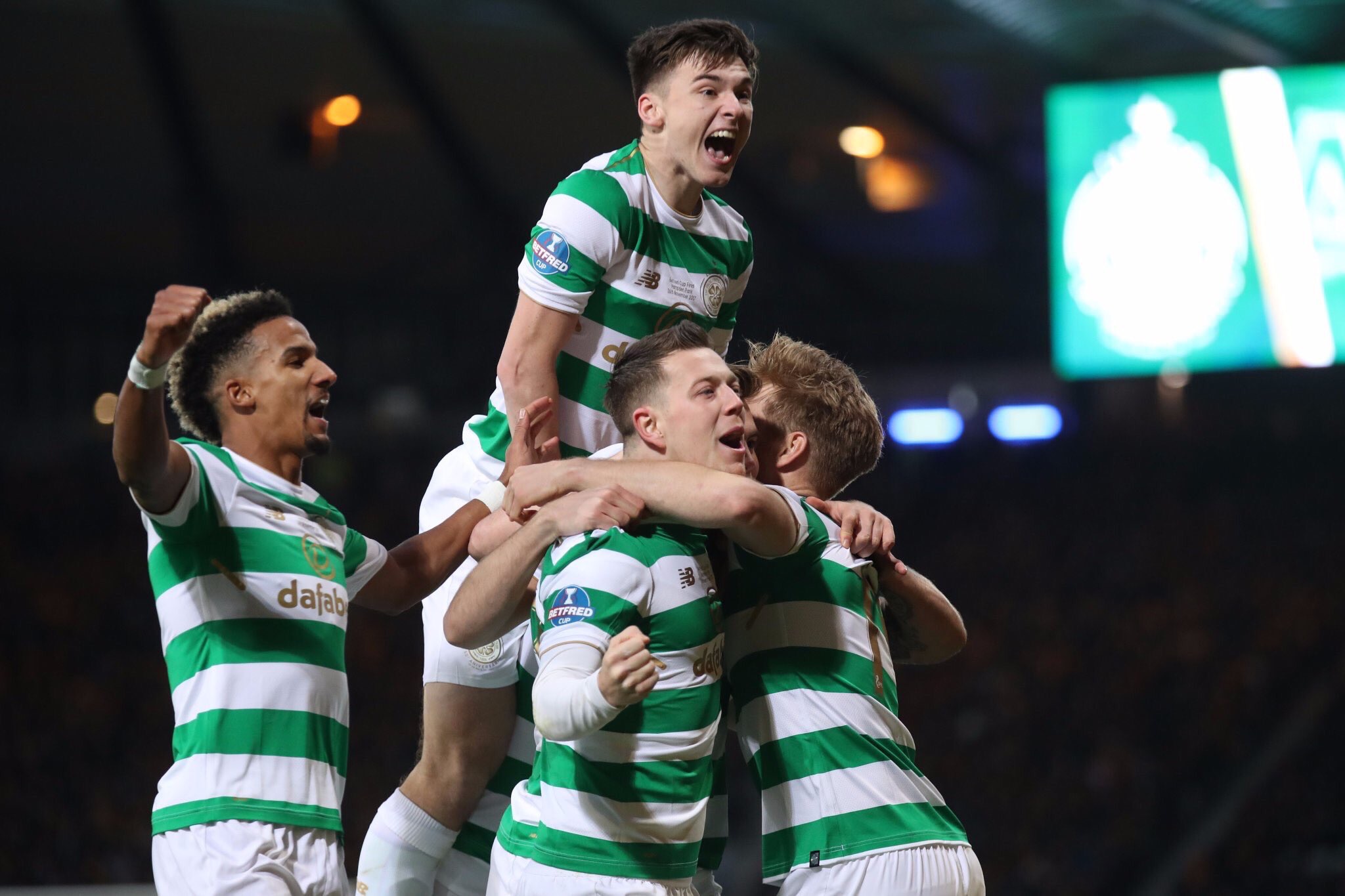 At the same time, the Bhoys stretched their unbeaten sequence against Scottish opposition to an amazing 65 games.

It wasn’t a classic and something special was required to light up the national stadium – and the ever-busy Forrest provided that.

Moussa Dembele got the ball rolling as he surged in from the left to pick out Callum McGregor with a neat pass.

The midfielder shifted the ball on to Forrest as he threatened menacingly just outside the box. 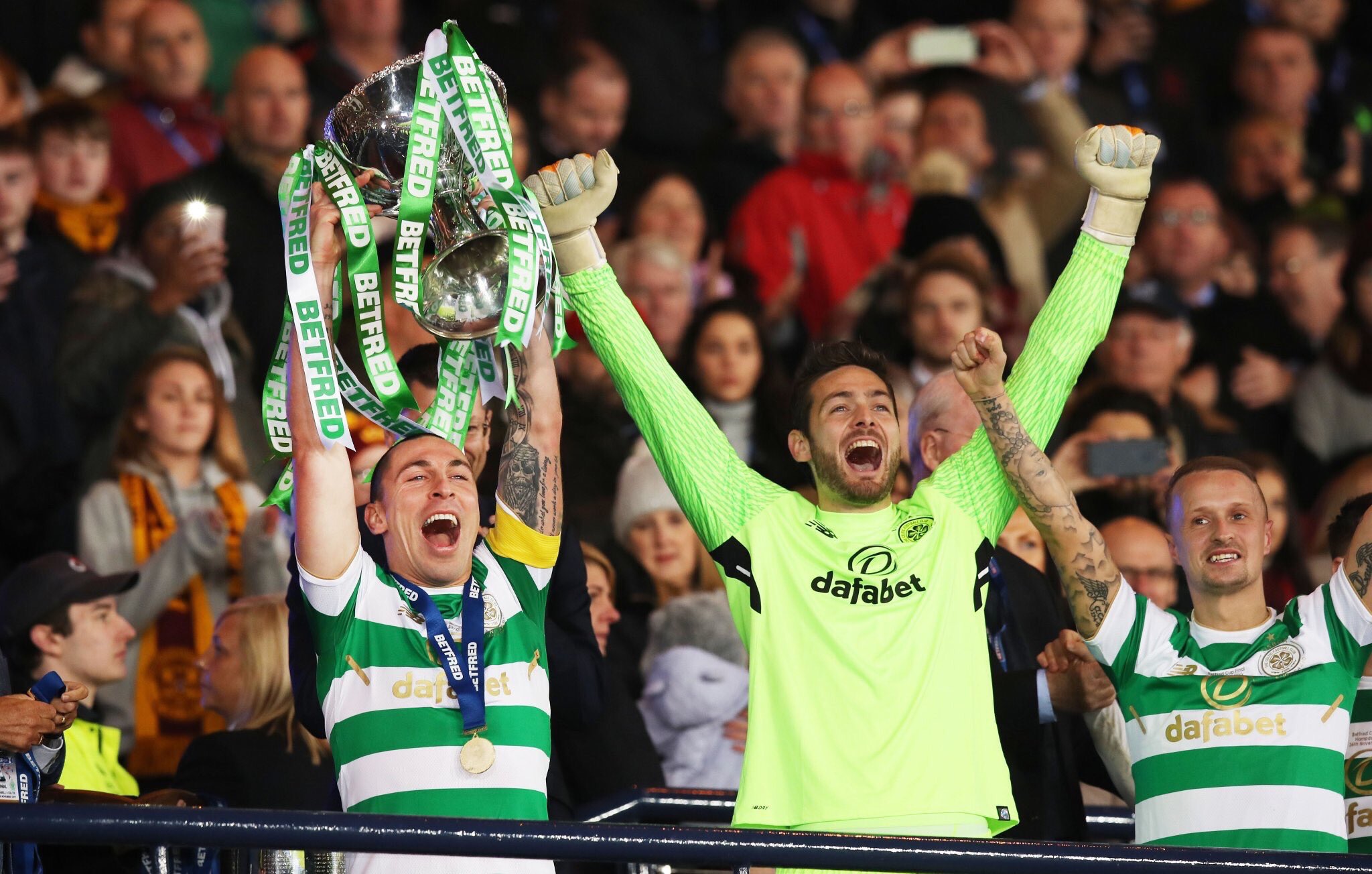 The right-winger jinked forward into the box with defender Charles Dunne refusing to commit himself. The Hoops ace moved the ball to his left foot and simply conjured up a magnificent finish as his curling effort swept past the diving Carson from 16 yards.

Forrest, rightly, accepted the acclaim from the ecstatic fans.

The Fir Park side, as expected, had come to battle and were making life extremely difficult for the Parkhead men.

Scott Brown spent the chunk of the 90 minutes with Well’s Chris Cadden for company and Louis Moult and Ryan Bowman were only too happy to let the Celtic central defenders know they were around.

Forrest’s dazzler, though, settled the Hoops and the second killer goal arrived nine minutes later from the penalty spot. 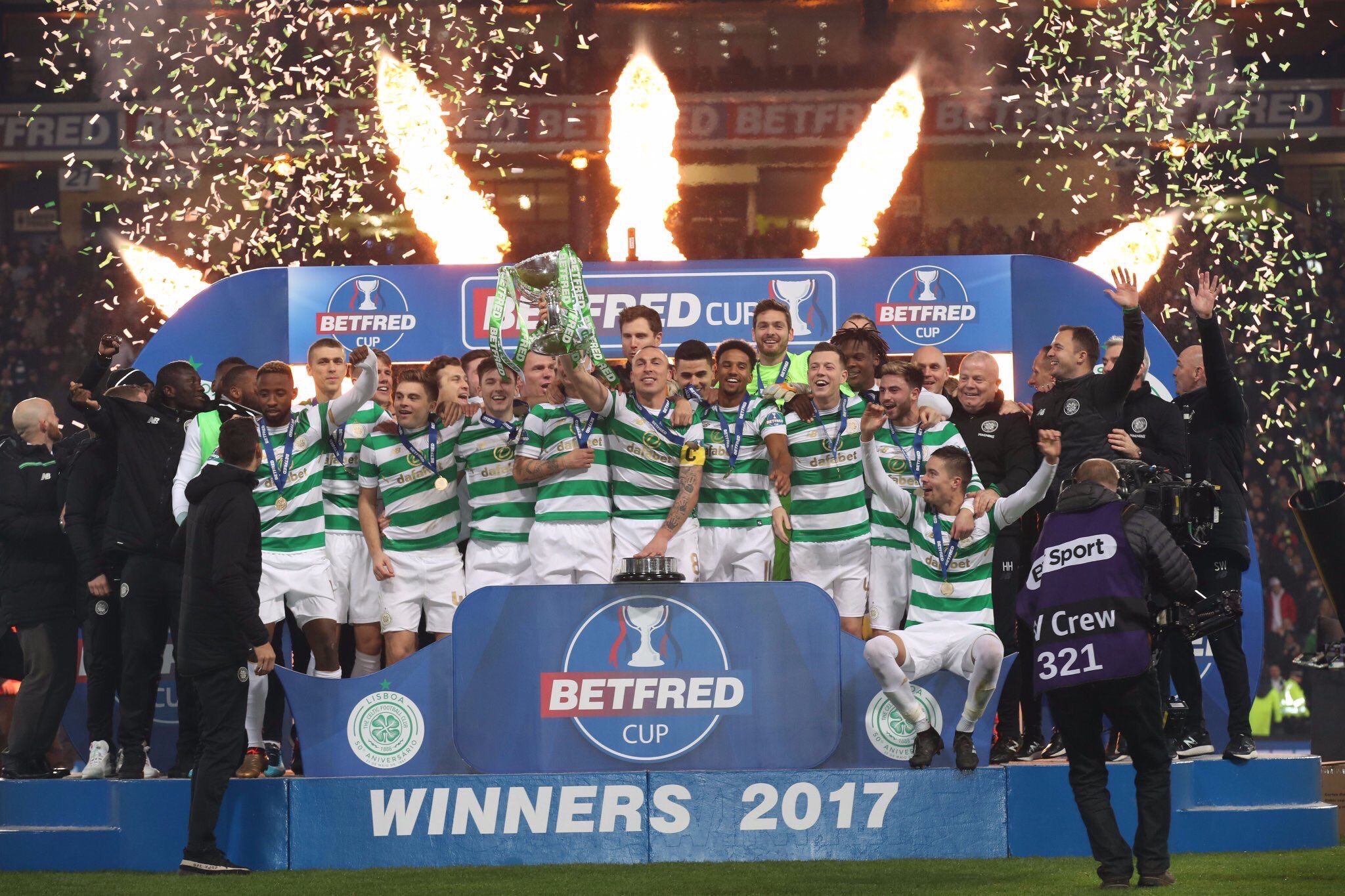 Scotty Sinclair, subdued in the opening 45 minutes, sparked to life after the break and looked a lot more like the player who collected 25 goals last season.

Dembele sent the Englishman scampering into the box where Cedric Kipre pulled him back. It was enough to knock the attacker out of his stride and referee Craig Thomson unhesitatingly pointed to the spot.

Kipre then saw red as Well were reduced to 10 men while Dembele lined up to take the award.

The French ace, who looked combative throughout, has a 100 per cent record of scoring in the Betfred League Cup after goals in his five previous games in the competition.

He was in no mood to fail at the sixth hurdle and he thumped the ball straight down the middle as the Well keeper took off for his left.

The game, effectively, ended there and then as a contest.

But, to be fair, it took an astonishing reflex save from Craig Gordon to prevent an equaliser only four minutes after Forrest’s wonderful breakthrough effort.

A misplaced header from Mikael Lustig was fed out to Andy Rose on the left wing and he pitched in a superb cross. Moult, who destroyed Aberdeen and Sevco Rangers in the earlier rounds, blitzed in a powerful six-yard header that looked a goal all the way.

Somehow the Hoops No.1 got an arm to the ball to deflect it up and onto the crossbar and Kieran Tierney completed the clearance.

Moult also struck the woodwork with the last kick of the ball from a free-kick seconds before the final whistle.

However, once Dembele struck from the spot there was only going to be one winner on this occasion.

Rodgers sent on Leigh Griffiths for Dembele in the 64th minute and the international frontman should have scored at least two goals.

In the 78th minute, Brown combined with McGregor and Griffiths was set free, coming in from the left into the box.

A goal looked a certainty, but the forward got his angles slightly awry and clattered the near post and the ball bounced to safety.

Near the end, Paddy Roberts, on for the impressive Forrest, slung in an inviting cross from the right.

Griffiths got in behind the Well rearguard, but somehow managed to divert the ball over the bar from four yards.

Roberts, too, might have scored near the end with a wicked effort that dipped just over the crossbar while Stuart Armstrong drew two exceptional saves from Carson.

It may have taken a moment of magic from Forrest to pilot Celtic towards their 17th League Cup, but once his exquisite effort nestled behind the sprawling Carson the silverware was in sight.

CQN Man of Match – CRAIG GORDON, for that save!