Celtic Quick News on News Now
You are at:Home»Latest News»‘IT’S NOT OVER,’ WARNS CALMAC
By CQN Magazine on 9th August 2018 Latest News

The midfielder was on target for his eighth European goal for the Hoops in the frustrating 1-1 stalemate in the Champions League qualifier against the Greeks at Parkhead last night.

Now Brendan Rodgers’ men face the daunting second leg at the Olympic Stadium in Athens on Tuesday where they know they must score to keep alive their hopes of a third successive season in the group stages of Europe’s elite competition.

McGregor said: “The tie is not over. We’ve shown in the last couple of years we can go away and score goals and get results.

“It’s about having the tactical awareness and then letting our attacking players cause them problems. It’s far from over.

“You’ve seen over the past few seasons we’ve been tested and we’ve managed to come through, even in previous qualifying campaigns.

“We know how big a task it is, but we will definitely be ready for it.

“I think if I get a chance, I can finish them. If something comes my way, then hopefully I’ll stick it away.

“It’s always good to get goals, especially in the big games, so I was delighted to add to my tally. It would be massive to get another one over there.
“It’s just about us being positive, trying to get on the front foot.” 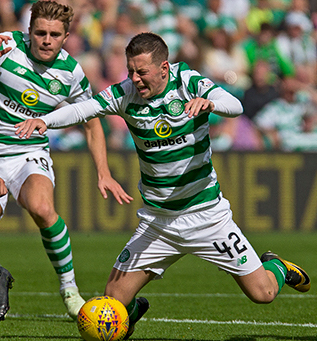 ‘I’M NO FALL GUY’…Callum McGregor, watched by James Forrest, takes a tumble, but he insists Celtic won’t falter in Athens.

McGregor added: “Obviously, we’re disappointed we didn’t win the game. Everybody looks from the outside, it’s against 10 men for half-an-hour and we didn’t break them down.

“It might look a bit flat, but I think the players need to stay positive, we need to believe we can go over there and get a good result.

“We know what we need to do to get through. When they went down to 10 men, you anticipate going on to score a few goals and win the game.

“Credit to AEK, though. They set out their stall and made it difficult. We had a few shots and crosses, but it never quite fell for us.

“We are still positive and upbeat. We created enough chances to think we can go over there and get a good result.

“We expect more of the same. They are in a strong position, but you could see we can create chances. We need to be defensively strong because we can’t afford to concede.

“We need to defend better, but we are still positive.

“Ultimately, the the mood is disappointment, but we’re fully aware and fully capable of going there to get a good result.”